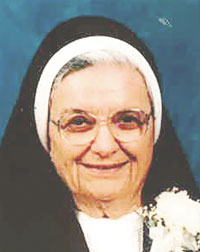 Sister Mary Carmel DeSantis, R.S.M., a member of the Sisters of Mercy of the Americas Mid-Atlantic Community for 71 years, died July 19 at the Mercy Center, Dallas, Pa. She was 95.

She was born in Millbrook, N.Y., and attended Millbrook Elementary School and Millbrook Memorial H.S.

She entered the Sisters of Mercy Novitiate in Syosset, L.I., on Sept. 8, 1947 and professed her final vows in September 1953. Sister Mary received her bachelor’s in English from Mt. St. Vincent’s in the Bronx, a master’s in library science from Pratt Institute and a master’s in American Literature from St. John’s University, Jamaica.

From 1972-76, she was Reverend Mother of the Brooklyn Regional Community of the Sisters of Mercy.

A funeral Mass was held at the Sisters of Mercy Convent in Whitestone. Burial was in St. Charles Cemetery, Farmingdale, L.I.