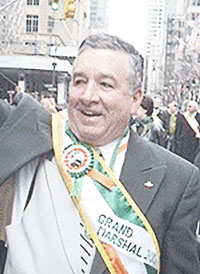 For the past 25 years, Smith was chairman of the Alfred E. Smith Memorial Foundation and master of ceremonies of the Alfred E. Smith Foundation Dinner. The dinner is named after the late governor, who was the first Catholic presidential nominee of a major party. The event, which is held annually on the third Thursday of October at the Waldorf Astoria hotel in Manhattan, raises money for Catholic charities. It is famous for including the two major candidates for U.S. president during election years.

Smith worked for many years on Wall Street. He served as chairman of the former St. Vincent Hospital in Manhattan, and founded Hackers for Hope, an organization that donated more than $10 million to St. Vincent Catholic Medical Centers Comprehensive Cancer Center, Memorial Sloan Kettering Cancer Center and other organizations that treat and try to find a cure for cancer.

He is survived by his wife, two children and six grandchildren.