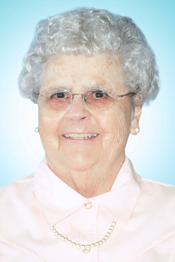 She entered the congregation in 1955 as a registered nurse and lived her religious life serving in the ministry of health care in positions of nursing teacher, and school administration at St. John’s School of Nursing and Catholic Medical Center.

Her funeral Mass was held Maria Regina Chapel, and her burial followed in Calvary Cemetery in Brentwood.