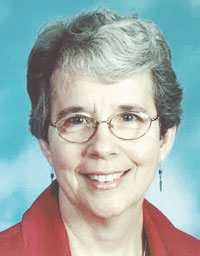 Sister Grace Agate, R.S.M., a member of the Sisters of Mercy of the Americas Mid-Atlantic Community for 53 years, died Oct. 14 at St. Joseph’s Hospital, Savannah, Ga. She was 71.

She was born in Brooklyn and attended St. Brigid’s Elementary School and Bushwick Public H.S., both Bushwick.

Sister Grace entered the Sisters of Mercy Novitiate in Syosset on Sept. 3, 1966, and professed her final vows in October 1973.

She received her bachelor’s in theology, her master’s in education and theology all from St. John’s University, Jamaica. She also received a Certificate for Spiritual Direction from the Center for Peace and Justice.

From 1989-96, she was formation director of religious vocations for the Sisters of Mercy.

She was also director of adult spirituality at St. Kevin’s, Flushing, 1990-95; a member of the retreat team at Tabor House, Oceanside, L.I., 1995, and an instructor at the Pastoral Formation Institute.

Most recently, she was coordinator of workplace spirituality for the staff of St. Joseph’s/Chandler Hospital, Savannah, Ga.

A funeral Mass was held at the Sisters of Mercy Convent in Whitestone. Burial was in St. John’s Cemetery, Middle Village.