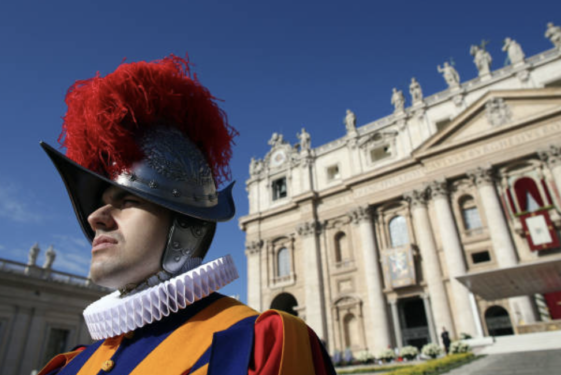 (Crux) Rome – For at least the past six centuries, there’s always been a spirit of “We Few, We Proud,” about the Swiss Guards, the small but elite military force, with their signature multi-colored uniforms and timeless halberds, responsible for the personal security of the pope.

Yet for this year’s edition of the annual swearing-in ceremony on Monday, the word “few” will take on a new, and more literal, meaning. The 23 Swiss Catholic males between 19 and 30 who’ll enter the corps represent a drop-off of nine new members from last year, or almost 30 percent.

Though no official explanation has been offered for the drop, the Vatican has announced that a series of video clips will be issued in coming months intended to stir up interest among young men in Switzerland to “become part of this world.” The series will be titled, “The Swiss Guard tells its story.”

Ahead of Monday’s ceremony, which will unfold in the Vatican’s Cortile San Damaso in the presence of Swiss dignitaries as well as various bishops and cardinals, Pope Francis met the corps of the Swiss Guards on Saturday (Francis himself won’t be on hand for the event, since on Monday he’ll be visiting Bulgaria ahead of a quick stop in Macedonia the next day.)

The swearing-ceremony is held each year on May 6 because it’s the anniversary of the Sack of Rome in 1527, when only 42 of 189 Swiss Guards survived a ferocious attack on the Vatican by mutinous troops of the Holy Roman Emperor. Despite the carnage, the remaining Swiss Guards were able to spirit Pope Clement VII to safety using a secret passage connecting the Apostolic Palace with the nearby Castel Sant’Angelo.

Francis on Saturday thanked the guards for their “precious and generous service to the pope and the Church,” but this was no military address – instead, the pope devoted most of his brief remarks to giving these youthful Swiss men enjoying a sojourn in Rome a mini-lesson in diversity.

“Cultural, religious and social diversity is a human richness and not a threat,” the pope said, inviting the Swiss Guards to learn “to recognize in the other a brother and a companion, someone with whom to share serenely a patch of the road.”

“This will help you live in society with the right attitude,” Francis said, adding that doing so “is particularly important in a world experiencing, now more than ever, massive movements of peoples and persons seeking security and a dignified life.”

The pontiff argued that the experience of being a member of the guard, living in close quarters and having to make sacrifices for the unit, can help foster the right approach to life.

“The reality of the barracks teaches certain ethical and spiritual principles that reflect many of the values that we need in life: Dialogue, loyalty, balance in relationships, mutual understanding,” he said.

“You have the chance to experience moments of joy and, inevitably, difficult moments typical of a collective experience,” he said.

Above all, the pope said, the guards “have the chance to develop healthy friendships and to train yourselves in respect for the peculiarities and the ideas of others.”

The pope charged his personal protection force with always being prepared to offer “a word of comfort, a gesture of fraternity” to “people who lie in contemporary tombs of pain, of confusion and unease, who await a light that helps them be reborn to a new life.”
In that sense, the pope suggested, the Swiss Guards aren’t just called to be members of a military unit, but “convinced witnesses of the risen Jesus, who’s alive and present in every time.”

“You must be witnesses and apostles of personal and communitarian renewal, because people expect complete dedication and holiness of life from those who are in the service of the Holy See,” Francis said.

According to the custom of the Swiss Guards, the new members will swear their oaths in the four official languages of Switzerland: German, French, Italian and Romansh, a language spoken by roughly 50,000-70,000 people in the canton of Grisons. Earlier in the day, the guards will also lay a wreath in the Vatican’s small Piazza of the Roman Protomartyrs in commemoration of the 147 members of the corps who died in 1527.

During the ceremony, the new guards will swear to “faithfully, loyally and honorably serve” the pope “with all my strength, sacrificing, if necessary, also my life.”

Monday morning, Italian Cardinal Angelo Comastri will celebrate a Mass on Vatican grounds for the guards. Comastri, 75, is the Archpriest of St. Peter’s Basilica and the Vicar for the Vatican City-State.