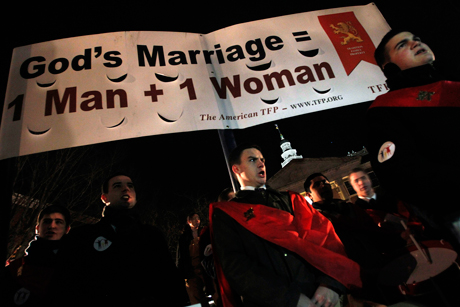 WASHINGTON (CNS) – The same-sex marriage issue will be facing lawmakers and voters in several states this year.

Democratic-controlled legislatures in Washington state, Maryland and New Jersey are considering legislation that would legalize same-sex marriage, while Maine voters will vote on a same-sex marriage referendum in November.

Voters in North Carolina and Minnesota will consider constitutional amendments defining marriage as between a man and a woman. In New Hampshire, the Republican-controlled legislature is gearing up to vote on a bill that could reverse that state’s same-sex marriage law.

Maryland Gov. Martin J. O’Malley, a Catholic, is sponsoring legislation to legalize same-sex marriage. If it passes, Maryland will be the seventh state, plus the District of Columbia, to allow same-sex marriages.

Mary Ellen Russell, executive director of the Maryland Catholic Conference, the public policy arm of the state’s bishops, said same-sex marriage is being pushed by a small group of advocates.

“If we dismantle the connection between marriage and mothers and fathers of children, we risk losing sight of the tremendous importance of keeping the nuclear family intact,” she told The Catholic Review, newspaper of the Baltimore Archdiocese.

Treating marriage differently from other relationships is not discrimination, Russell added, noting that there are already laws on the books that provide benefits for those in same-sex relationships.

Two days before the governor’s announcement, then-Archbishop Edwin F. O’Brien of Baltimore privately wrote to him asking that he not promote the redefinition of marriage. O’Malley told the archbishop he was “sworn to uphold the law without partiality or prejudice.” The archbishop’s letter and O’Malley’s response were later released to the media.

The archbishop, now cardinal-designate, is currently apostolic administrator of the Baltimore Archdiocese; last August he was appointed pro-grand master of the Equestrian Order (Knights) of the Holy Sepulcher of Jerusalem, based in Rome.

“Because they have friends who might be gay,” he said, “they think it’s all right to question this whole thing and to vote for an overturn (of the definition of marriage).”

Should Maryland lawmakers vote to legalize same-sex marriage, opponents have promised to take the issue to voters through a referendum.

In New Jersey, leaders in the Democratic-controlled legislature have made a bill to legalize same-sex marriage in that state a top priority. However, Gov. Chris Christie has vowed to veto such a bill if it passes, saying he wants the issue to be placed on the ballot.

The state’s Catholic bishops said in a Jan. 20 statement that traditional marriage “has its roots in natural law.”

“As citizens, we must protect marriage as the union of one man and one woman,” they said. “Same sex unions may represent a new and a different type of institution – but it is not marriage and should not be treated as marriage.”

At a town hall meeting, Christie said the issue of “whether or not to redefine hundreds of years of societal and religious traditions, should not be decided by 121 people in the statehouse in Trenton. … The institution of marriage is too serious to be treated like a political football.”

On a 4-3 vote, a Washington state Senate committee Jan. 26 passed a bill to legalize same-sex marriage and sent it to the full Senate. Gov. Christine Gregoire, who also is Catholic, has pledged to sign this bill into law.

In a Jan. 23 testimony before a Senate committee, Seattle Archbishop J. Peter Sartain urged lawmakers to oppose the measure.

He said the bill has “elicited strong emotions on both sides” and hoped the voice of Catholic bishops in the state “contributes significantly to the discussion of a matter that has serious long-range implications for our state and society at large.”

Archbishop Sartain said bishops oppose the bill “based on the grave challenge this legislation poses to the common good. By attempting to redefine marriage, it ignores the origin, purpose and value of marriage to individuals, families and society.”

He noted that “not everyone holds our faith and beliefs, but the universal principles that form the basis for our position are readily discernible by all people. They transcend any particular society, government, or religious community; in fact, they are built into human life itself.”

In Colorado, proposals to legalize same-sex civil unions are expected to be put forth in the new legislative session.

The Colorado Catholic Conference, in a statement posted on its website, said that the “major flaw with civil union legislation is that in its language and practical effect it creates an alternative, parallel structure to marriage using explicitly spousal language.”

The statement also noted the state’s constitution defines marriage as the union of one man and one woman. “It does little good to protect marriage in our state constitution, on the one hand, and legally recognize other unions, such as civil unions, that compete with it for equality. Civil unions are essentially marriage under another name and all implications of these types of unions have not been fully discerned or discussed.”

“To be clear, in opposing civil unions we have no desire to deny anyone his or her fundamental civil rights,” the statement said, adding that “nearly every benefit being sought by” civil union legislation “or any legislation that seeks to redefine marriage … is already legally available to Coloradans.”[hr] Contributing to this report was George P. Matysek Jr. and Matt Palmer in Baltimore