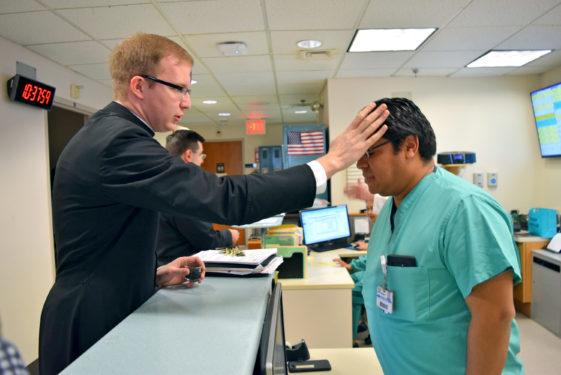 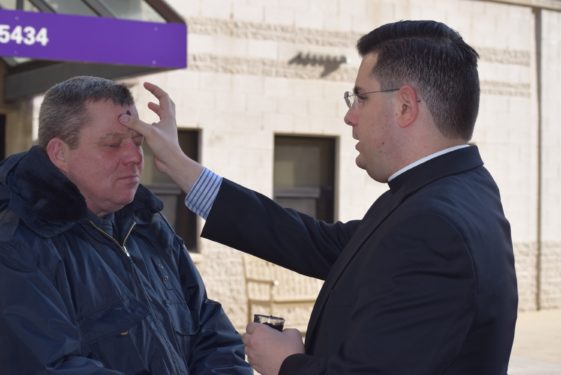 The silhouette from his black suit jacket left no room for wrinkles. His slick-back hair was gelled to near-perfection only to accentuate the crystal-clear eyeglass frames he wore that day. Even from his formal black dress shoes with barely a scratch to the crisp black menswear top, his entire ensemble completed his look for St. Valentine’s Day, Feb. 14: a third-year seminarian administering ashes to the faithful gathered during Ash Wednesday morning Masses at St. Michael’s Church in Sunset Park.

While the secular holiday calendars called for a day of sharing heart-shaped treats and dressing in one’s finest attire, the Church’s liturgical calendar marked the beginning of Lent – a season of fasting, praying and almsgiving for Catholics all over the world.

For seminarian Michael Falce, the day would also consist of sharing. But instead of chocolates, it would be the distribution of ashes to patients and staff members at Calvary Hospital and anyone else who might request for the symbols of penance on their forehead. Accompanying Falce to the hospital’s Sunset Park campus, located within NYU Langone Hospital, was second-year seminarian Brendon Harfmann who is also studying at St. Joseph’s Seminary in Dunwoodie.

After the completion of morning Mass, the two seminarians hopped in Harfmann’s car and headed to nearby Calvary, in their hands a small, clear bowl fit for their thumbs and filled with black ashes. They headed to the hospital that specializes in palliative care for adult and elderly patients with advanced cancer. Calvary has served more than 4,000 patients since it opened its satellite location in 2001. Its mission is to serve not only the physical necessities of its patients and families, but also their emotional and spiritual needs. When available, staff chaplains celebrate Mass on Sunday afternoons in the chapel and throughout the hallways are religious sisters with years of nursing and administrative experience.

As the seminarians approached the hospital’s purple awning and asked an attendant where they could park, immediately the hospital employee asked them for ashes. Whether it was the sign on the dashboard marked with “Diocese of Brooklyn” or the sign of ashes on their foreheads, the duo took to the task of serving the needs of the people without any hiccups, never intruding forcibly, but respectfully obliging to those not observing the Lenten season.

While Harfmann’s volunteer experience in the hospital ministry included spending Wednesday afternoons at Calvary, it was at its original location in the Bronx. So trekking through NYU Langone’s hallways trying to find the 25-bed facility was a maze.

But in the same accord, it was through a deliveryman asking the two for ashes who helped lead them to Calvary.

Upon entering the third floor where they would minister, each seminarian was assigned a group of patients requesting that they might somehow still be able to participate in much more than a date on the calendar, but their preparation for Christ’s Resurrection, a redemption reminding the faithful that while life passes away on Earth, hope still exists.

As he gracefully moved from room to room, Falce asked staff if they would like ashes. Some obliged. For every “no” there was always a smile from a seminarian faithfully accepting what was to come on his journey to the priesthood.

“I think today is a good opportunity for the seminarians to be able to go out in groups to parishes especially during this diocesan Year of Vocations that Bishop DiMarzio has instituted here in our diocese,” said Falce.

“It’s an opportunity for people to see the seminarians … to see that there are young faces, there is a future, there is hope for the Church. The Church is not going anywhere, the Church has been here for 2,000 years and it will continue – but to know that it’s strong and it’s alive and it’s well here in Brooklyn.”

He shared how serving in different hands-on ministries such as the homebound and nursing home ministries has allowed him to find a deeper connection to the people he interacts with.

“It’s very rewarding to be able to not be in a parish setting and see that people need to be nourished by the faith in a lot of different places, but most especially when they’re sick or when they’re dying,” added Falce. “It’s the families as well that are questioning ‘where is God in this?’ ‘why is this happening to my loved one.’ The patient themselves may be asking ‘why is this happening to me, I’ve lived a good life, I’ve done great things’ but yet that questioning.”

Harfmann shared similar sentiments as to why serving in the hospital ministry will serve two-fold and help him during his formation process to the priesthood.

“It’s preparing us because this is what we’re going to be doing in the future – getting the call from the parishioner to go and visit their loved one in the hospital and bring them Communion,” he said. “A lot of the time it’s a reminder that just being present means the world to someone who’s going through something. That’s what I try to do, I just try to be present, to listen and to sit with them and to pray with them.”

His experience also shaped his perception on just being present to those he serves now and in the future.

“For me, whenever I enter Calvary, whether it’s in the Bronx or here in Brooklyn, I often think back to something one of the priests said to me which was, when we talk about New Evangelization, or spreading the faith, a lot of the times they talk about having to go out to the streets … we have to go out to social media,” he added.

“But being in a hospital setting, for me, it’s reminding me that a lot of the times people, when they’re in their final days, are coming back to the faith, are recognizing that they desire God’s mercy and so for me, in particular, for all of us to be with them in their final moments, to be with their family members, but also to be there for those people who are caring for them – the nurses, the doctors, it’s a rewarding ministry.”

As the two finished distributing ashes on the third floor, they thanked staff and administration for the work they do.

Walking and conversing through the hallways dressed in all black in a sea of blue scrubs and sneakers, the seminarians were once again flagged – this time by a nurse manager asking if the two could distribute ashes to his staff of nurses working in ambulatory surgery.

One thought on “Seminarians’ Call to Duty Prepares for Priesthood”