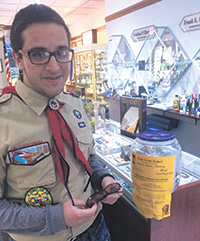 Congratulations to Davide G. Rindone from St. Athanasius parish, Bensonhurst, on achieving the rank of Eagle Scout. He collected over 500 pairs of glasses for those in need in Guatemala. That’s 200 pairs over his initial goal! He collaborated with local churches, schools, the YMCA and other places of work to collect donations of glasses as well as the money necessary to ship the glasses to Hope Alliance headquarters in Utah. The organization then sent the donations to Central America.

“Some of the world’s poorest people will be able to see well for the first time, making it possible for them to succeed in school, become employed and otherwise become self sufficient,” Rindone said. The project also had the added benefit of spreading awareness of the need of prescription glasses in developing countries.