Sheepshead Bay resident Christopher Monzon is now a member of the elect, and is one step closer to joining the Catholic Church that has been on the periphery of his life.

Despite bitter cold temperatures, Monzon gathered with those who will join the Catholic  Church this Easter at the Rites of Election and Call to Continuing Conversion last Sunday, Feb. 14.

The Catholic Church in the U.S. will welcome thousands into the fold through the Rite of Christian Initiation of Adults (RCIA) during the Easter Vigil on Holy Saturday, March 26. 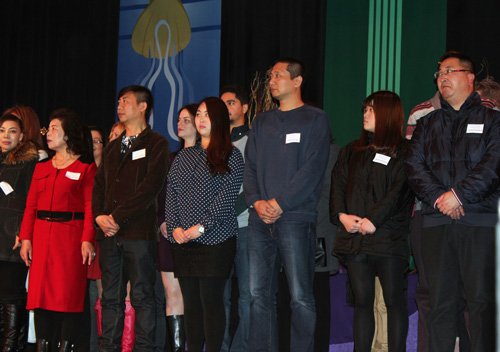 These men and women have been preparing for this step in their faith journeys through weekly sessions over several months with sponsors and RCIA leaders on the parish level. The RCIA program is coordinated on the diocesan level by Sister Alice Michael, S.U.S.C.

Bishop Nicholas DiMarzio welcomed the adult catechumens and candidates in two ceremonies in the auditorium of the former Bishop Ford H.S., Park Slope, while children were received by Auxiliary Bishop James Massa at a ceremony on the previous afternoon.

The parishes of St. Athanasius, Bensonhurst; Our Lady of Perpetual Help, Sunset Park; and St. John Vianney and St. Paul Chong Ha-Sang, both Flushing, have the largest numbers of people seeking sacraments in the diocese this year.

Both the catechumens and candidates were called by name and expressed their wishes to receive the sacraments in the presence of their sponsors and families. All of their names were recorded in two separate books and presented to the bishop.

“You are on the verge of a major change in your life,” the bishop told those preparing for the sacraments.

“Your personal preparation … entails a conversion experience, a change in your lives, a turning from non-belief to belief, and for some of you, a turning from sin to holiness. … We know that you are not taking this step lightly.”

Monzon has been thinking about becoming Catholic for years, and more seriously for at least a decade. Though born to Catholic parents, he was never initiated into any faith tradition. He’s attended Catholic liturgies but was always on the outside, having not been formed in the faith and being unable to receive the sacraments.

“This means a brand new life for me, for us,” said Monzon, standing beside his wife Natalie. She came into full communion with the Church last Easter at their parish of St. Mark’s, Sheepshead Bay. The couple hopes to start a family soon, and raise their children to “follow the path Jesus walks.” 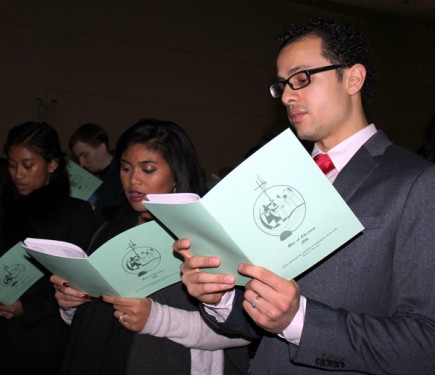 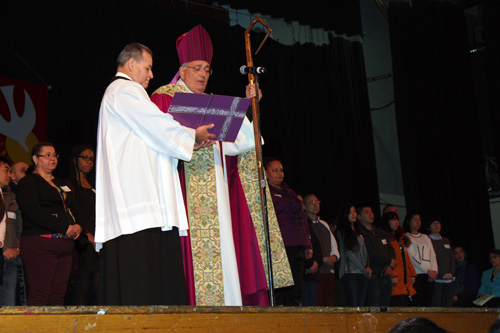 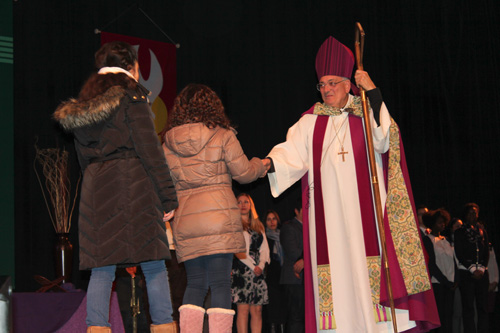 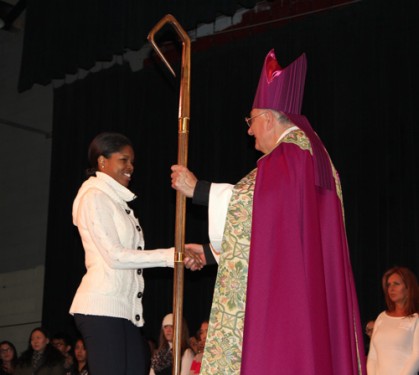 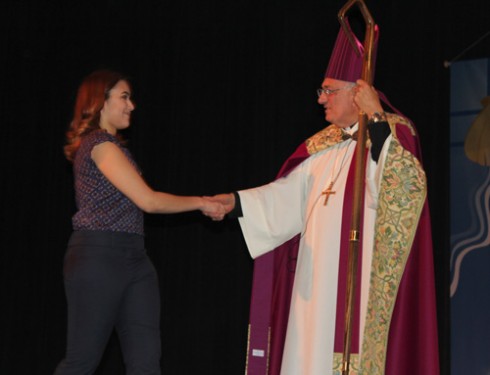 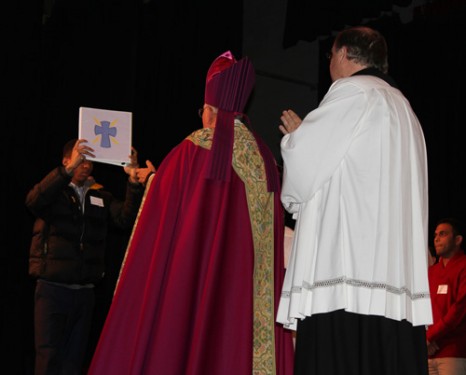 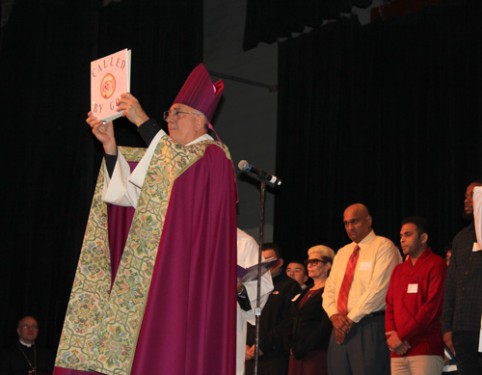 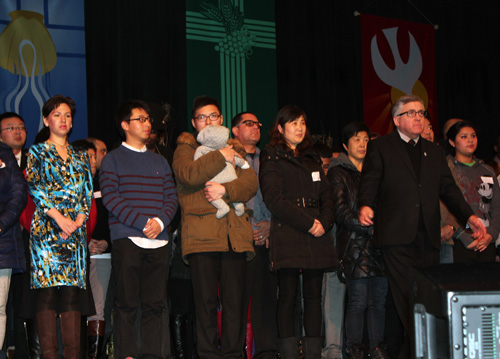 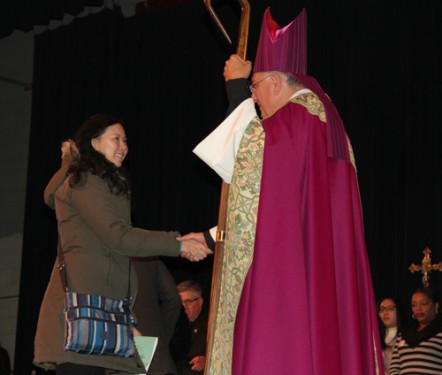 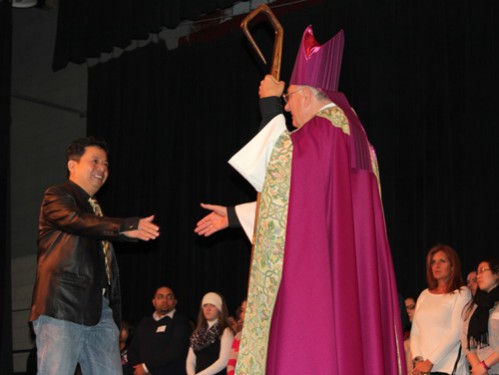 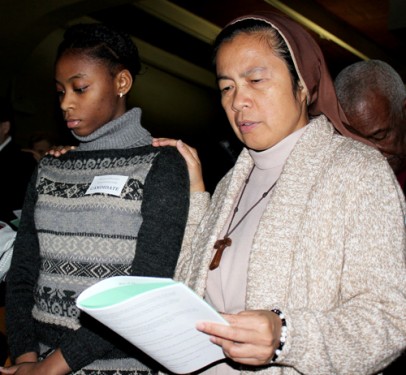 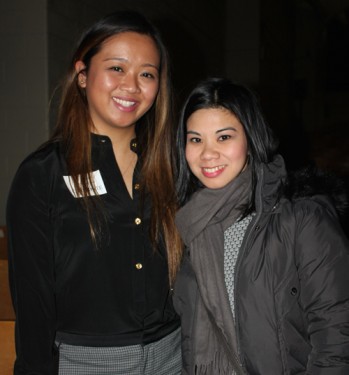 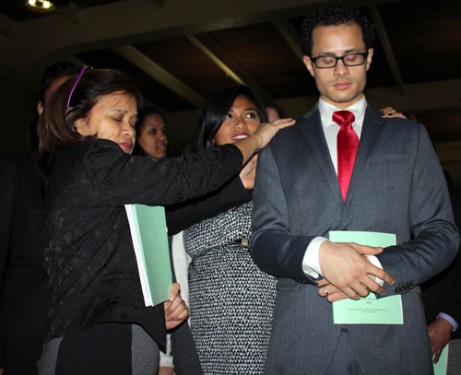 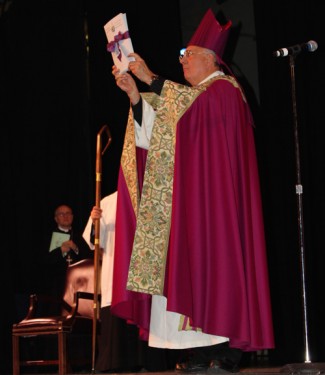 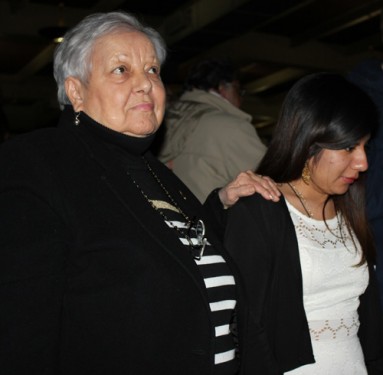 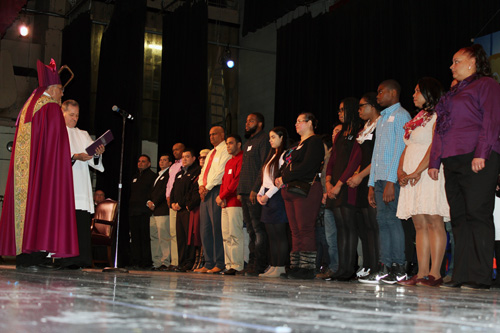 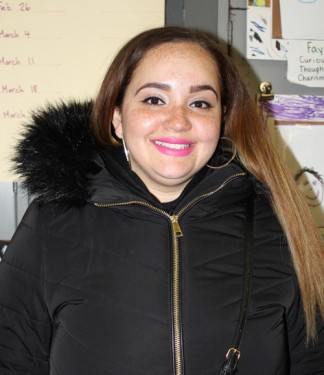 In his homily, Bishop DiMarzio spoke about the day’s Gospel reading from St. Luke about the temptations Jesus faced in the desert after being baptized. The bishop said Jesus was tempted so He could give an example of how to deal with and overcome temptation against “the world, the flesh and the devil.”

In a special way, the bishop asked the catechumens and candidates not to lose their zeal – or slack off in their Mass attendance – after they receive the sacraments.

Candidate Jamie Ong has no intention of skipping Masses at Our Lady Queen of Martyrs, Forest Hills, especially if Auxiliary Bishop Paul Sanchez is the celebrant.

Born and baptized Catholic in her native Philippines, Ong said that for various reasons, she didn’t have access to the religious education she needed to receive the Eucharist and Confirmation.

Though she attended weekly Mass with her parents as a child, her disconnect with the sacraments and lack of formation made it easy to pull away as she grew older.

When she moved to Forest Hills two years ago, she noticed Our Lady Queen of Martyrs Church was a short walk from her front door.

At that point, she said, “I really felt out of touch with my religion and God. Nothing exceptional happened. I just woke up one Sunday and said, ‘I live two blocks away.’”

She went to Mass that Sunday, and many thereafter – drawn back each time by the community of people and the presence of Bishop Sanchez.

“You feel this love come across the entire church when he (Bishop Sanchez) celebrates Mass,” she said.

When she read a notice in the parish bulletin about the RCIA program last summer, she decided it was time.

“In the beginning it was weird because they talked about personal stuff, and I’m not great about articulating how I feel,” she said, speaking about her RCIA sessions.

“It’s hard to share something so personal but I feel a lot more open now. They’ve all become like family to me.”

Ong’s sponsor on this faith journey is her best friend, Rose Lunney.

“She has started going to church more and asks me more questions about God,” Lunney said.

Equally important, Lunney said Ong is asking about practical aspects, including “what it’s like being a Catholic later on, and living a Catholic life.”

The desire to live an authentically Catholic life is what brought Canarsie resident Felicia Rodriguez to the RCIA program at St. Jude Church.

Better Example for Her Children

Rodriguez was baptized Catholic but “my parents never put me in for Communion or Confirmation. I want to set a better example for my children,” she said.

And she already has.

“It’s a journey for them and for us,” said Glenda Harry, part of the RCIA team at St. Jude Church.

The catechumens and candidates bring new ideas and perspectives, she explained.

“You learn the challenges they face, and you try to encourage them on their journeys, to help them grow in the faith,” Harry said.

Growing up as a Protestant, Robert Blaise Lee of Bayside admits he “was not too diligent with religion.” But he fell in love with a woman who is.

“My wife is a Catholic and she goes to church every week,” he said with pride.

Inspired by her faith and example, he has decided to take his own leap of faith.

“I don’t know what being Roman Catholic is all about yet,” Lee said. “I’m definitely learning more about God and Jesus. And there are more regulations. But so far, I feel at home.”