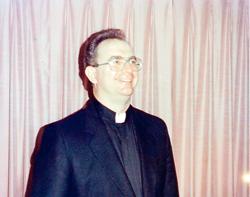 Father Kirby was ordained to the Priesthood on May 27, 1967. He completed graduate studies in Sacred Scripture at Catholic University, Washington, D.C., and the Pontifical Institute, Rome.

Father Kirby served as an assistant at St. Camillus, Rockaway Beach, 1967, and as a Parochial Vicar of SS. Joachim and Anne, Queens Village, 1967-72.

In 1976, he was named associate director of the diocesan Pastoral Institute, Douglaston, and then served as director from 1987 to 1999. He was on sick leave from active duty since 1999.

His funeral Mass was celebrated on March 12, at 10:30 A.M., at Immaculate Conception Center, Douglaston. Auxiliary Bishop Octavio Cisneros was the main celebrant, and the homilist was Msgr. Edward V. Wetterer.

One thought on “Retired Director of the Pastoral Institute, Brooklyn Native”