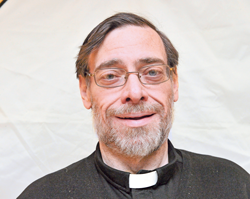 Father James H. Sweeney, a retired priest of the Diocese of Brooklyn, died March 5 at Coney Island Hospital. He was 64.

“He was an incredibly talented artist. He could draw, he could paint, he could sketch with pen and ink,” Deacon Matthew Oellinger told The Tablet.

“He was wonderfully intuitive. If someone was having an issue, he seemed to know that something was going on, even in his infirmity, always available to sit and listen and or be there for others,” Deacon Oellinger said.

Father Sweeney’s funeral Mass was held March 10 at Immaculate Conception Center in Douglaston with Bishop Nicholas DiMarzio as the main celebrant. The homilist was Msgr. Raymond P. Roden, pastor of Our Lady of Sorrows Church in Corona.