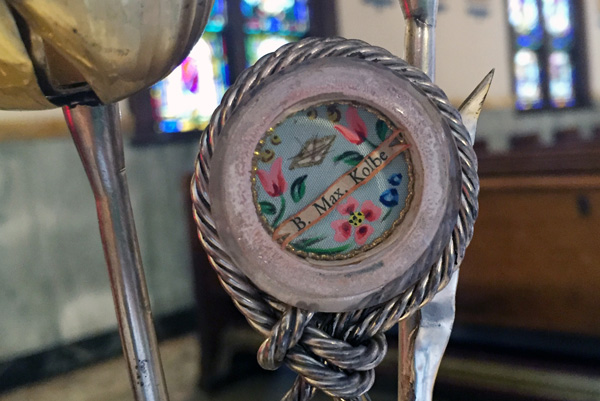 The major relics of a Polish-born Franciscan friar, who voluntarily gave his life for a stranger in a Nazi concentration camp, are on pilgrimage in the Brooklyn Diocese through July 24.

The first-class relics of St. Maximilian Maria Kolbe, O.F.M., Conv., are on an eight-month tour of the U.S. and Canada in honor of the 75th anniversary of the friar’s martyrdom in the death camp at Auschwitz, Poland, during World War II.

Sponsored by the Franciscan Friars Conventual, the pilgrimage began in January, and will conclude on the saint’s feast day, Aug. 14, at the relic’s permanent home, the Shrine of St. Anthony, Ellicott City, Md.

Next week, Pope Francis is scheduled to pray at the cell where St. Maximilian died when he visits Poland for World Youth Day.

In the diocese, the relic has been visiting three parishes served by the Conventual Franciscan Friars: St. Adalbert, Elmhurst, July 15-17; the San Damiano Mission, Greenpoint/ Williamsburg, July 18-20; and Most Holy Trinity-St. Mary, Williamsburg, July 22-24. Each site has offered opportunities for Mass and veneration.

A small, but devoted congregation welcomed the saint to Holy Family Church, the home base of the San Damiano Mission, during a mid-day Mass July 18.

Father Michael E. Heine, O.F.M. Conv., director of the Shrine of St. Anthony in Ellicott City, was the main celebrant and homilist. Father Raphael Zwolenkiewicz, O.F.M. Conv., who is stationed at the mission, concelebrated.

Walking past striped blue-and-white banners, reminiscent of the garb prisoners wore at Auschwitz, Father Heine processed into Mass carrying a reliquary with snippets of hair from St. Maximilian’s beard. The reliquary featured symbols of the saint’s life: a friar’s cord, denoting his vocation and vows, arranged amid a lily of purity and tulip of martyrdom rising from thorns and set upon a base shaped like Poland.

“Today, we honor a man who didn’t simply talk about the Gospel, but certainly put the Gospel into practice,” Father Heine said.

Born in Poland in 1894, Raymund Kolbe entered the Franciscan Friars Conventual as a young teenager and received his religious name. After ordination, he worked as a professor, and started a newspaper and radio station to promote devotion to the Blessed Mother and the Catholic faith.

He served as a missionary in Japan for six years, and returned to Poland just before World War II. When his beard provoked Nazi occupiers, he cut it, and another friar secretly saved the clippings.

During the war, he used the media to criticize the Nazis. He was arrested in 1941 and sent to Auschwitz, branded as prisoner No. 16670. When a fellow prisoner was selected to die by starvation, the priest volunteered to go in his place. He survived two weeks until guards gave him a lethal injection.

St. Maximilian was canonized a “martyr of charity” by his fellow countryman Pope St. John Paul II on Oct. 10, 1982. He is the patron saint of prisoners and those addicted to drugs.

Bensonhurst resident Michele Testa and her husband Ronald, heard about the relics from their pastor, Msgr. Ronald Marino of St. Rosalia-Regina Pacis parish.

The couple explained that they have a loved one who struggles with addiction. “We’ve been praying for him for years, and he (St. Maximilian) has really helped,” Michele said.

Mary Rardin from St. Matthew’s Church in Charlotte, N.C., planned her visit to see relatives in Greenpoint around the relic’s schedule.

“I found out that the relic was coming so I booked my tickets to make sure I was here,” she said. “I have a heroine-addicted niece and he’s the patron saint of drug addicts. My niece is very special to me so I had to come.”

She heard of St. Maximilian in a Bible study group two years ago. She began asking him to watch over her niece, who is now drug-free.

Rardin offered prayers of thanksgiving for her niece, and asked St. Maximilian to continue “to protect her and keep her safe.” 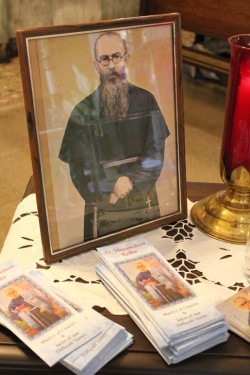 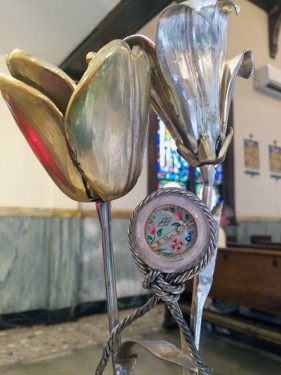 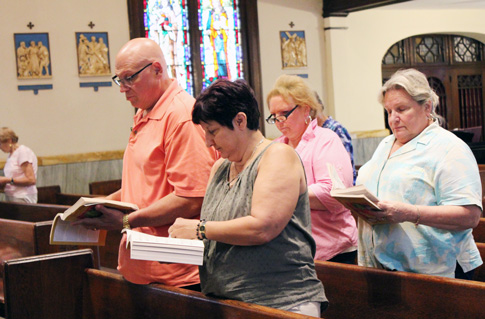 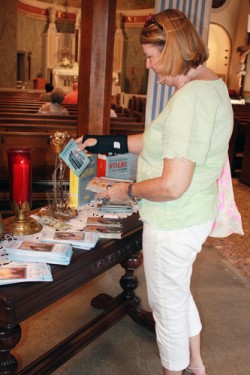 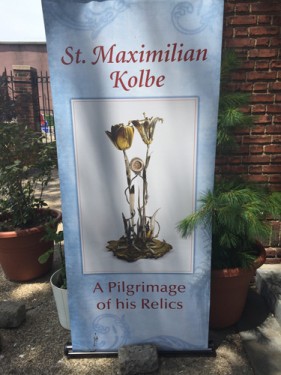