The newest adult members of the Church came in record numbers to show their gratitude and fellowship at the diocesan Neophyte Mass, according to the director of faith formation.

The number of people receiving their sacraments of initiation this Easter Vigil did not change from previous years, despite the negative news and scandal the Church has withstood during the past year.

In fact, Theodore Musco, the longtime diocesan director of faith formation and the secretariat for the diocesan school of Evangelization, said that people have shown up to all the events held by his office in record numbers all year. The events target various populations, not just the newly initiated.

“Every event we had this year has been sold out – more people than ever have been attending our diocesan and parish events, “ he said. “It shows that faith still resides in the hearts of the people… It’s certainly the work of the Holy Spirit.”

[RELATED: Emerging From the Waters of Baptism: Three Attempts and a Lifetime of Preparation]

“There is a great enthusiasm among those people that entered the church this Easter,” he said, adding that every day he tries to stay aware of the people’s needs through the storm the Church is facing and thinks of ways his office can assist people on their faith journey.

Marlita Stanely received all her sacraments at St. Clare, Rosedale, this Easter and came back two weeks later to pray with the diocese at the Mass of the Neophytes at the Immaculate Conception Center in Douglaston, May 4.

“I’ve been reading and hearing about all about the church scandals, but I am so happy that it’s been addressed and that’s the number one thing,” she said. “So what has been broken we can now fix.”

Stanley says she has felt a newness overcome her since her baptism and wants to share in that spirit with her fellow neophytes.

Her journey began two years ago when she moved to the Rosedale area.

“I was looking for a Church home,” she said. “I went to several churches but the doors were closed. But when I stepped on the steps of St. Clare and I pushed the door, it was open. And I went in and I began to worship right there. Since then, I had the desire to be a member of St. Clare.”

For Ricardo Chiriboga, it was his fiancée who initiated his initiation into the Church. He said she expressed her desire for God to be part of their marriage and their home, so he took the plunge into the waters of baptism. He said at first it was difficult, especially with the negative outlook some have on the Church. Not everyone was supportive. He has felt far away from God, but changed when he decided to follow love: the love incarnate in his soon-to-be-wife and Him, who is Love.

“I’m so happy to have received the sacraments,” he said. “Spiritually I feel so great. I talk more with God.”

Auxiliary Bishop Neil Tiedemann, who was the main celebrant of the Neophyte Mass, likened the day, which also included testimony, a guest speaker and lunch, to Pentecost. He explained that people of many different backgrounds and cultures from thoughout the diocese came together to be welcomed officially to the diocese.

“Our faith in life is a process,” he said explaining the importance of supporting the neophytes.

Referring to a New York Times article citing steady numbers of neophytes this year, Bishop Tiedeman said it is the work of the Risen Lord.

“It’s wondrous how Christ invites all people and touches our hearts,” the bishop said. “Divisions and struggles are part of life and part of the Church.”

He said these struggles date back to the very beginning of the Church when the apostles tried to help everyone be one community.

“Once you’re touched by God, it just changes your whole outlook,” the bishop said. 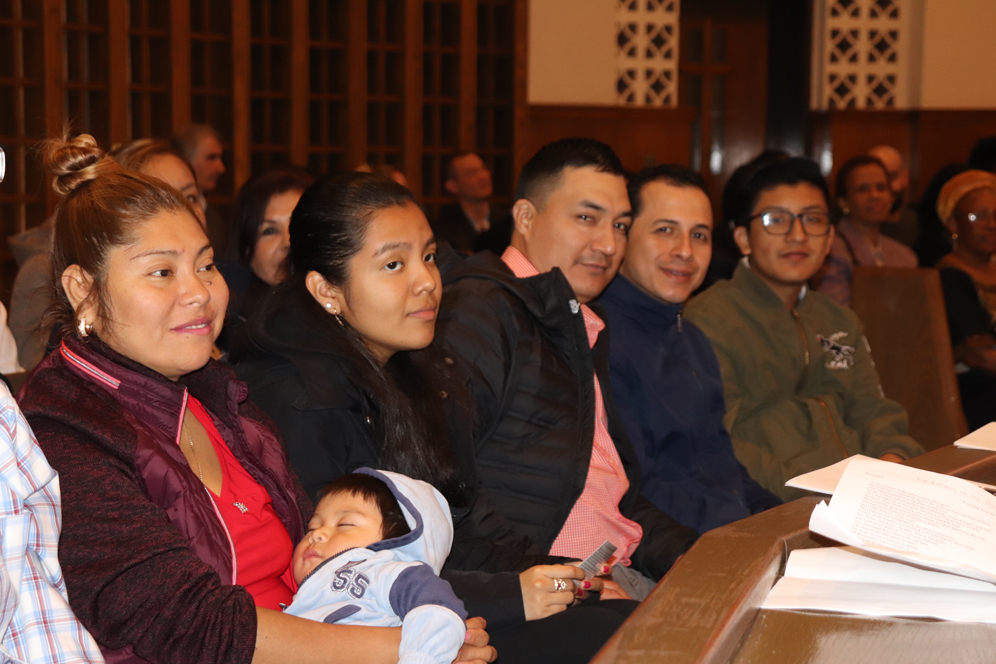