Demonstrators from downstate New York gathered on the steps of the Federal Hall National Memorial in Lower Manhattan to protest the Affordable Health Care Act.

They demonstrated, at the site where the first U.S. Congress met to adopt the Bill of Rights over 200 years ago, to protest a mandate which they believe breaches their First Amendment right of religious freedom.

The rally was a coordinated effort led by Stand Up for Religious Rights, who organized rallies nationwide on June 8, at noon. This was the second such demonstration meant to show unified opposition to the Health and Human Services (HHS) mandate that will require employers in all states to provide contraceptive services and abortifacient medications to employees, if it is upheld by the U.S. Supreme Court.

Dr. Alveda King, director of African-American Outreach for Priests for Life and the niece of the Rev. Martin Luther King, Jr., came as one of the seven speakers at the rally.

“The government wants us to trade in our First Amendment for birth control pills,” she told the crowd. “This is not the time to give up hope. We have an obligation to tell the truth.”

Among the reasons Dr. King gave for her opposition to the mandate is that it is detrimental to health care. She said this mandate would hurt religious charities that cater to the health needs of those who are most in need.

Dr. Anne Nolte, M.D., from the Gianna Catholic Healthcare Center, also said this mandate is harmful to health care during her speech at the rally.

“Hormonal contraception is not preventative health, and it is not even good healthcare for women,” she said. “They are telling us that pregnancy, a sign of health and normal function, is a disease that should be cured.”

Dr. Nolte said the health risks of hormonal contraception are a danger to women because they increase the risks of breast, cervical and liver cancer.

Maria McFadden Maffucci, editor of Human Life Review, told the demonstrators that their health is not the only thing women can risk, if this mandate goes into effect.

“I don’t want (my daughters) to think that fertility is something they have to get rid of so that they can be more like men,” she said.  “I want them to respect themselves as women.”

“I don’t think this is a women’s health issue because there is no problem with accessibility,” she said. “This is about the government trying to decide our religious beliefs.”

“We’re here to stand up for religious freedom,” said Father Agustino Torres, C.F.R., who served as the emcee of the event.  “We hope to raise awareness of the injustices going on.”

The Franciscan Friars of the Renewal brought a guitar to the rally to spread the message through music and to unite the demonstrators.  Father Torres said the friars led the crowd in religious and patriotic songs to help set a “mood that make us feel proud of our rights and a mood that makes us feel encouraged to defend our freedom.”

Rebecca Downs, who came to the rally from St. James, Setauket, L.I., said this mandate is a direct affront to the rights of the Catholic Church.

“This really is something that affects the whole nation, not only Catholics, but all people of conscience,” said Father Frank Pavone, national director of Priests for Life.

He said his organization has devoted resources to help in these rallies because it helps bring the issue to the forefront.

“We want to give the ordinary American the opportunity to say: ‘I stand with you, even if it’s just for an hour,’” he said.  “By coming together at these rallies, we hope that people will then speak about the issues they heard at the rallies in their schools, their work places and their communities.”

Ray Mooney, who organized a Stand Up For Religious Rights Rally in Bayside outside Congressman Gary Ackerman’s district office, said the most important aspect was education.

“Not only were we getting the public aware, but we were also able to get the people with us more informed,” he said.

Mooney said the group decided to stage a separate rally in Queens, instead of joining in the Manhattan rally, in part because holding demonstrations in various locations helps spread the message further. He said the demonstrators received positive reinforcement from people driving by.

The national effort was started by Dr. Monica Migliorino Miller, director of Citizens for a Pro-life Society in Wisconsin, and Eric Scheidler, executive director of Pro-Life Action League in Chicago. Local groups across the country took charge of organizing local rallies.

The Diocese of Brooklyn is also involved in this effort. In solidarity with the other dioceses in the United States, Brooklyn will join in 14 days of prayer for religious freedom leading up to the Fourth of July. St. Joseph Church, Prospect Heights, will host an overnight prayer vigil to observe the Fortnight for Religious Freedom beginning Friday, June 22, at 7 p.m. with a Mass.  The Blessed Sacrament will be exposed for adoration until the following morning at 8 a.m.

Set against the backdrop of the U.S. Capitol, a Stand Up for Religious Freedom rally drew hundreds of participants to a park in Washington D.C.

The mood was energetic and seemed to take on a political tone. As one protester called out, “Stand up and fight for religious freedom,” a passer-by quickly retorted, “I am a Catholic, and I support HHS.”

“Never before has the government forced taxpayers to buy products directly involved in sterilization and abortion causing pills,” said U.S. Rep. Michele Bachmann, R-Minn.  The former presidential candidate was the first of a host of speakers to address the crowd.

She called attention to the special place religious freedom has in America’s roots. Bachmann told the crowd, “In the rotunda of the Capitol, I gazed upon my favorite painting, the ‘Embarkation of the Pilgrims.’  The pilgrims have their hands in prayer, and there is an open Bible in the center of the painting.”

She pointed to the central role religious freedom played in the pilgrims’ plight and journey to America. “Written on their sail is ‘God With Us,’” she continued, “and God is with us today in 2012.”

Other speakers drew comparisons between the HHS mandate and the anti-religious antagonism of former socialist nations. Rep. Andy Harris, R-Md., son of Hungarian and Polish immigrants, said: “The government burned down my parents’ church. This government is burning down the churches not with a torch but with a pen.”

Speaking in Spanish, Father Jose Hoyos of the Diocese of Arlington, Va., talked about the Hispanic community’s need for love and compassion and its support for pro-life issues.

The next group of speakers took on a decidedly partisan tone, calling for a change in administration in the White House. Rep. Alan Nunnelee, R-Miss., said, “When government expands, freedom contracts. We ask you in November to send us help and replace a president.”

“We have approached dependence because of our great abundance,” said Robert Dornan, former U.S. representative from California who was a prominent pro-life voice when he served in Congress.

As a result, he said, he believes Americans were willing to lose their freedoms to be reliant on the government. “We have to change presidents because everything we love is at stake in this election.” 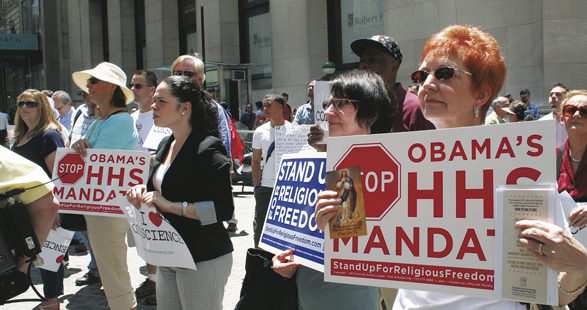 Contributing to this story was Daniel Linskey, a Catholic News Service reporter in Washington, D.C.