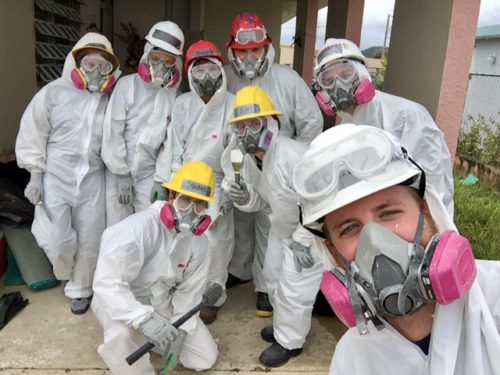 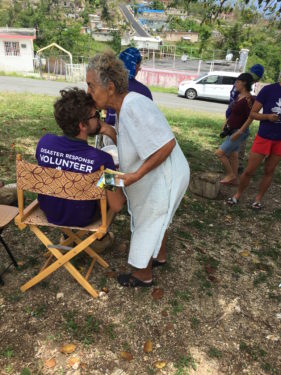 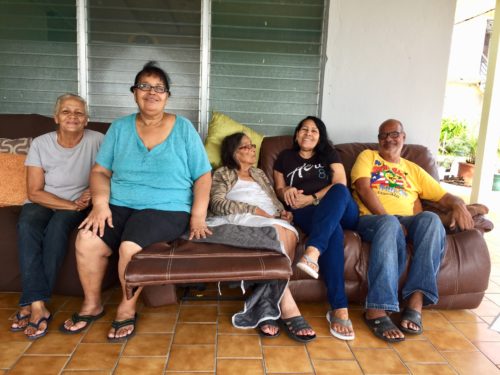 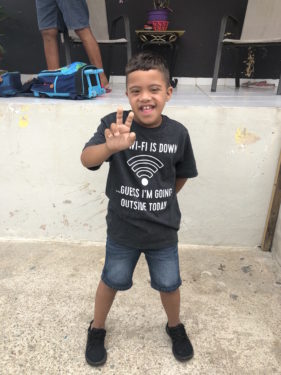 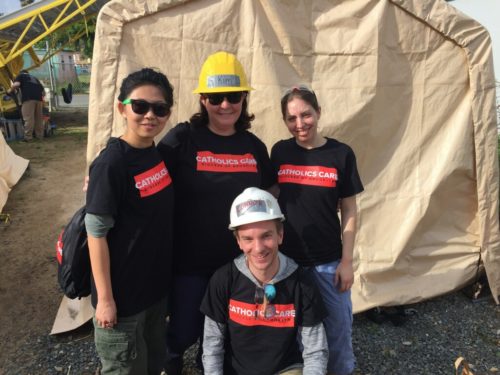 Last week I accompanied 14 volunteers from Catholics Care, the Diocese of Brooklyn’s disaster recovery team, to aid in the hurricane devastated area of Yabucoa, Puerto Rico.

The area is still recovering from Hurricane Maria, a Category 4 storm with winds of 155 mph and sustained winds over 60 mph. It tore a path of destruction more than 50 miles wide and made landfall in Yabucoa Harbor.

More than 1,000 people lost their lives from the storm. An additional 135,000 Puerto Ricans moved to the mainland U.S. in the storm’s aftermath, leaving behind homes, lives, pets, family and friends. As for the people of Yabucoa, they have been without power and a reliable source of clean drinking water for over seven months. There are more than 900 families on the waitlist for repair assistance – and this was where we headed.

Partnering with the disaster relief non-profit, All Hands and Hearts, we were set with tasks that ranged from debris removal, muck and gut projects, roofing repairs, demolition work and general repair work. Working in temperatures in the high 80s with humidity averaging near 85 percent, in the rain and in the sunshine, we met amazingly warm people with a strong conviction of faith who welcomed us as if we were family.

Heidi and Luis Medina are pensioners, who live high in the hills of Yabucoa. With waterfalls behind their home and banana trees in their yard, their small home was heavily damaged by Hurricane Maria. The roof needed to be fixed to stop the leaks and the house was covered in mold.

Arriving to make repairs to their house, Heidi asked us to postpone our work because she was having difficulty breathing. The spray we use to treat the mold, called shockwave, irritates her lungs and makes her breathing worse. Since the hurricane hit, she has found herself in the hospital several times for respiratory issues caused by the mold in her home.

With a crucifix displayed in their living room and an image of the Virgin Mary on the window of their car, Heidi said that she has faith God will continue to help them. Holding back tears, she said “God never forgets the poor. Thank you for coming to help us, thank you.”

Sebastian, a 10-year-old boy with Down syndrome, lives with his family in a small house on the side of a hill in Yabucoa. We first met him on day two, when we were distributing food and water. Their home was heavily damaged, sustaining roof damage, flooding, broken windows, and a loss of electricity. Almost eight months later, the family is still without a reliable clean water source and depends on bottled water to sustain them. Like all residents of Yabucoa, they have no power.

According to the family, FEMA assistance was not enough to make the repairs and create a safe environment for young Sebastian. Like so many, they are on a waiting list for help from the volunteers of All Hands and Hearts.

With each visit, the Catholics Care team gave Sebastian and his family essential supplies and toys, and we had time to listen and play with young Sebastian – who happens to love dancing and Coca-Cola.

One of our teams had the opportunity to assist the Delgado and Sanchez families in Limones, Yabucoa. Like everyone in Yabucoa, they have been without power and reliable clean water. They confided that they feel forgotten and ‘ghost-like’ by nearly everyone except the volunteers who come each day to help them.

The 90-year-old matriarch, Catherine Delgado, a four-time cancer survivor, grew up in the house she still calls home. Her daughter, Martha Sanchez, lives with her, as does her cousin Josilito. Martha’s daughter, Maria lives a few doors away and an aunt, Candi, stays with them during the cold Pennsylvania winters.

This tight knit Catholic family weathered Hurricane Maria from their home as they watched the small house across the street completely blow away and another nearby house lose its roof and shed. When asked what they did as the hurricane bore down on them for 24 hours, Martha said that they prayed a lot. Parishioners of Guardian Angel parish, they prayed that God would deliver them from the storm. They prayed for the safely of their neighbors and for the people of Puerto Rico.

Martha and Candi then showed us their beautiful statue of the Virgin Mary that has been in the family for nearly 90 years. They explained that the hurricane damaged her face and hands and blew most of the paint off the body. So one of the first things they did after the storm passed was repaint the statue, make new hands, and build a beautiful shrine to her in gratitude for delivering them from the devastating storm.

Standing in front of the Blessed Virgin Mary, Aunt Candi told us that each afternoon at six, the family prays the rosary for the people of Puerto Rico, the sick, the children, the poor, and for everyone they meet that day. As she reached for a sheet of paper, she asked us to write down our names so that they could not only pray for us, but also for the people in the Diocese of Brooklyn and for the volunteers at All Hands and Hearts.

After marveling over a handmade mosaic of the Sacred Heart of Jesus, we gathered on the patio, enjoyed café con leche, guava pastelillos, and were reminded that there is much more to life than that damaged building.

A Diocese of Brooklyn muck and gut team assigned to the Sanchez-Delgado house for a second day met young Angel. While the team was working on the house, a saddened Angel, age 10, approached wheeling his bicycle. The team had seen Angel waving the day before as he rode around Limones with his baseball glove and bat after school.

With his face looking toward the ground he asked us for help, “Hola, ¿alguien puede ayudar?” Both of Angel’s bicycle tires has become deflated and since his family is without power, he could not inflate the tires and play with his friends. The simple task of adding air to a child’s bike, along with many routine tasks, have become difficult, if not impossible. Not every family is able to afford a generator, let alone have the $30 a day or more for the gasoline it takes to make it run.

Angel continued to roll his bike toward us. When we explained that we did not have an air pump, his face lit up and reaching into his book bag, he pulled out a pump that we were able to connect to our car outlet.

After talking to Angel and giving him a few gifts, including an NYPD pin, he rode off with a huge smile. At least for the moment, he was another regular kid on his bike going to play with his friends. The smile he shared with us is the same smile so many people in this area shared with us every day, in spite of the challenges that make even being a kid hard.

We were assigned to help a family on the outskirts of town eliminate the mold in their home and prepare the home for the repair team. As we pulled up to the three- room farmhouse, there were several chickens and chicks, roosters, a goat, an injured horse, two hogs, guinea fowl, rabbits, and a few stray dogs. The house suffered a lot of damage. There were multiple broken windows, cracked walls, a damaged roof, broken doors and black mold covering the exterior and interior.

The family consisted of a young mother confined to a wheelchair, two young children, an aunt and a husband. Pointing to an image of Jesus hanging on the wall of the kitchen, they expressed gratitude that they were delivered from the storm, saying in Spanish that despite their situation, Jesus loves them and sent us to help make the living situation better.

Teams also did roof work all week in nearby Humacao. And on the last day, the Ramos family threw a surprise ‘thank you’ cookout for all the volunteers in the area. With a background of salsa music and dancing, the family served habichuelas guisadas, pork and salad.

The All Hands and Hearts volunteers had previously completed roof repairs, mold cleaning and repair work for the family, and they wanted to express their gratitude for the sacrifice the volunteers made by helping them. As a gift, the family gave each volunteer a hand-painted rock and a handwritten ‘thank you’ postcard.