One hundred and four years after a Catholic priest chose to stay on the R.M.S. Titanic and minister to those doomed to die in the infamous mid-Atlantic shipwreck, St. Paul’s Church on Court St. honored his legacy with a plaque.

The Cobble Hill church, which is now joined with St. Agnes to form one parish, was where the requiem Mass for the British priest was held. He was on his way to New York to officiate at his brother’s wedding when an iceberg brought doom to the ship he shared with more than 2,000 other people. More than 1,500 people died.

Two teenagers from Washington State flew to New York to dedicate the plaque, April 14, that they worked for over a year to put in to the Brooklyn church. Msgr. Joseph Nugent, pastor, led the unveiling ceremony after a short prayer service.

When Cady Crosby was 15 years old, she published a book, “Titanic Hero: Thomas Byles,” now available in Barnes and Nobles and on Amazon.com. This book and the research it entailed, spurred Titanic Heroes, an organization Cady started with her brother, Benjamin. 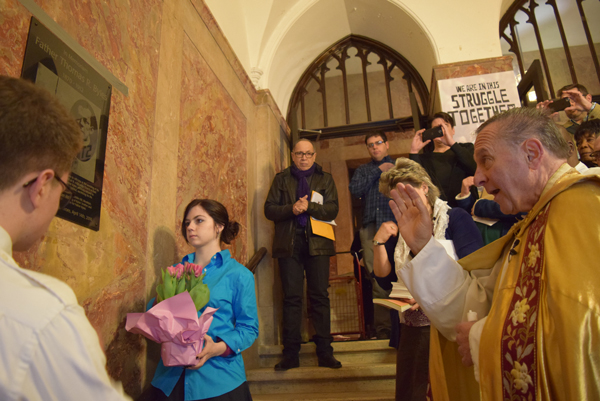 Msgr. Nugent said he was pleased to accept the memorial that now hangs at the vestibule of the church. He said the process had taught him a lot about the priest and the Titanic. He also said he was happy to invite the young people to the parish for an oral presentation because people are continuously captivated by the historic shipwreck.

“It kind of reminds us that none of us are invincible,” he said.

“Our family has been graced with a patron in Father Byles and we are pleased to help others know him,” said Tena Crosby, the duo’s mother, who travels with her kids around the country. “I’m so happy to take them where the Lord leads. We are a homeschooling family and this started out as a simple homeschool project. But it has now become a way of life for us. We have been so blessed by stories like this one that we learned to hunt history for heroes. I am inspired each time they speak.”

After the unveiling ceremony, the Crosby teens detailed the last day of Father Byles’ life. They recounted first-hand testimonies of the priest’s heroism in helping third-class passengers, offering up his seat in two separate life boats, praying with the crew and offering absolution before imminent death.

Benjamin said the priest’s life is a perfect topic for small-group presentations.

“Father Byles communicated his message of faith, saving grace and heroism through personal conversation with those doomed to die,” the 16-year-old said. “In the same way, we want to bring the message of heroism and action to people today personally, through in-person presentations like this one.”

“Benjamin and I do our best work in person,” Cady, now 18, said. “With a background in speech, we feel that nothing online can replace the emotion and communication that a face-to-face, real-time presentation evokes… We have four siblings behind us that I’m sure will continue the legacy Benjamin and I have begun.”

In attendance at the event was filmmaker Thomas Lynskey, who is working on a feature film about the priest titled, “Where Manhood Perished Not.” He is also working on a computer game based on the Titanic which will allow players to explore the Titanic in a virtual reproduction of the ship in detail true to the original.

“I wanted to come to support them but I wanted to pay my own respect to Father Byles,” he said.

Lynskey is currently looking for investors in his big budget film and can be reached by email at lynskey@vintagedigitalrev.com.

He hopes his movie will promote Father Byles’ canonization cause. Titanic Heroes gave out prayer cards at the unveiling ceremony for the canonization cause and made material about the priest available for sale.

One thought on “Priest from the Titanic Remembered in B’klyn”