Holy Family parish in Canarsie is one of the most diverse parishes in the diocese, welcoming worshippers of 51 ethnicities speaking 36 different languages – some of these parishioners speaking English as their third language!

The “diversity makes people feel comfortable so the parish is welcoming to all,” explains Father Edward Kane, pastor. 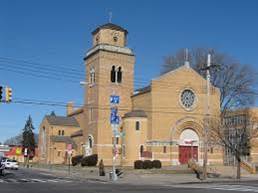 Father Kane has served as pastor at Holy Family for a year-and-a-half, but he has been involved with the parish for years prior to that. He wears many hats, serving and having served as parochial vicar, dean and administrator of St. Laurence’s Annual Catholic Appeal.

Father Kane said he felt “lucky” in the beginning of the Generations of Faith campaign, because “the goal was high for an area like this.” The parish has been through a lot, still feeling the aftermath of Superstorm Sandy back in 2012. Father Kane was positive, though, and encouraged his incredible committee, expressing, “It’s possible we can do it, so let’s see what we can actually do!”

From his experience, Father Kane said that it’s important to have a proactive pastor who is willing to speak up at meetings, set goals, communicate what will be done with the money and have the ability to respond to parishioners’ questions off the cuff.

“I’ve been here a while, so I expected them to come out and do their very best. I didn’t expect such a great success, but we would try to come close to make the goal. We had to keep pushing it along,” Father Kane shares.

Holy Family’s goal in the Generations of Faith campaign is $700,000 and the parish has already collected 330 pledges from parishioners, their largest amounting to $40,000! Funds raised at Holy Family will enable the parish to repaint the interior of the church and replace lighting and fans, install new doors in the church, and replace the boiler in the rectory, among many other projects to revitalize the buildings and, in turn, the community.

Father Kane’s advice to other pastors working on the campaign with their parish is this: “Don’t let it overcome you or think that it is insurmountable. Take a positive attitude from the beginning and assemble a good group of people, people who are workers who really have a handle on things. It will be a positive impact overall.”