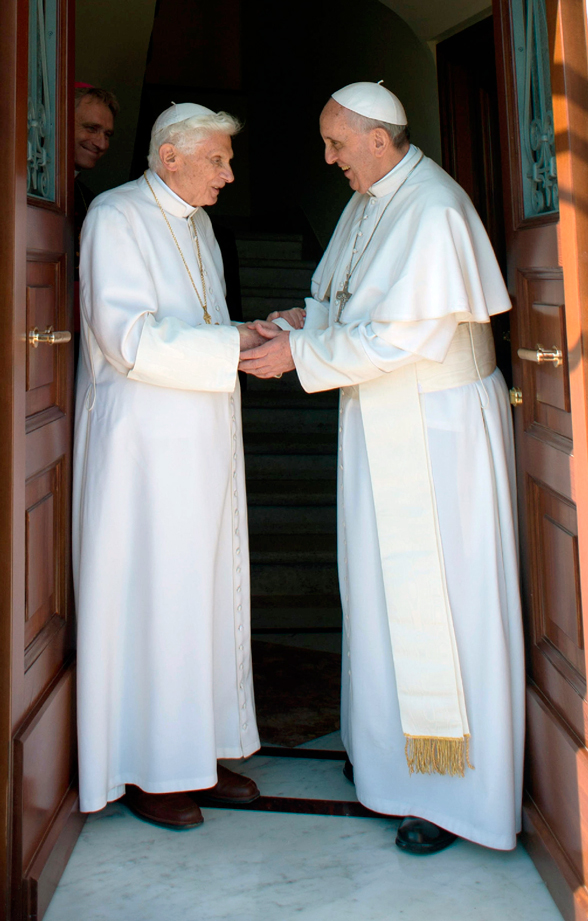 VATICAN CITY (CNS) – For the first time in history, the Vatican is home to a pope and a retired pope.

Pope Francis welcomed his predecessor, retired Pope Benedict XVI, to the Vatican May 2 outside the convent remodeled for the 86-year-old retired pontiff and five aides. Pope Francis and Pope Benedict entered the convent’s chapel together “for a brief moment of prayer,” said Jesuit Father Federico Lombardi, Vatican spokesman.

Pope Benedict had been staying at the papal summer villa in Castel Gandolfo since retiring Feb. 28. Pope Francis traveled to the villa 10 days after his election to visit, pray and have lunch with Pope Benedict; the new pope also has telephoned his predecessor on at least two occasions.

In response to questions about the fact that Pope Benedict seemed to be much frailer than he was two months ago, Father Lombardi told reporters, “He’s an elderly man, weakened by age, but he is not suffering from any illness.”

In the last year of his pontificate, Pope Benedict was seen walking with a cane on more and more public occasions; after Pope Benedict retired, Father Lombardi confirmed that he had had a pacemaker inserted before becoming pope in 2005 and had undergone a brief procedure in November to replace the battery.

While the Vatican is now home to a pope and his predecessor, neither lives in the papal apartments of the Apostolic Palace. Pope Francis continues to live in the Domus Sanctae Marthae, the Vatican guesthouse just south of St. Peter’s Basilica where the cardinals stayed during the conclave; the Mater Ecclesiae Monastery where Pope Benedict is living is just to the north of the basilica.

The location he chose as his residence had served since 1994 as home to four different communities of cloistered nuns – Poor Clares, Carmelites, Benedictines and Visitandines – who each spent a five- or three-year term there in a life dedicated to praying for the pope and the Church.

The structure includes what was once the Vatican gardener’s house; before the first group of nuns took up residence, Blessed John Paul II had it expanded to about 4,600 square feet, including a large chapel, refectory and infirmary.

Since the Visitandine nuns moved in November, the building has undergone a remodeling, including an expansion of the library specifically for Pope Benedict.

The retired pope will live in the Mater Ecclesiae Monastery with Archbishop Georg Ganswein, his secretary, who also serves Pope Francis as prefect of the papal household; and with four consecrated laywomen from Memores Domini, Father Lombardi said. The building also has a guestroom designed particularly for visits from Pope Benedict’s older brother, Msgr. Georg Ratzinger.

The Italian government helicopter bringing Pope Benedict to the Vatican from Castel Gandolfo was met at the Vatican heliport by Cardinal Tarcisio Bertone, Vatican secretary of state; Cardinal Angelo Sodano, dean of the College of Cardinals; and other officials from the Vatican governor’s office and the secretariat of state.

Jenna Cooper of Cornwall, N.Y., who is studying at the Pontifical University of the Holy Cross in Rome, said she came to the square “because I love Pope Emeritus Benedict. I wanted to be here to offer my prayerful support. I wanted to witness this historic event.

“It’s a beautiful witness that he’s dedicating his life to prayer; it shows how important prayer is for the life of the church,” Cooper said.[hr]

Contributing to this story was Carol Glatz at the Vatican.