An open flame, referred to as the Peace Light, arrived by plane in JFK Airport, Dec. 11 escorted by officials from Austrian Airlines.

After a welcome ceremony at Our Lady of the Skies Chapel, the flame began its pilgrimage across the U.S. in trucks and cars, lighting wicks in homes, churches and community centers along the way.

Austrian Airlines allows an open flame in a secured lamp on its flight because the flame originates from the Grotto of the Nativity in Bethlehem. The light at this grotto is a continuous flame. Every year for Advent it is shared with countries throughout the world in an outward sign of a yearning for peace.

Among those who squeezed into the small Catholic chapel at the Queens international airport to receive the light were leaders of the Ukrainian scouting movement, Plast.

“This year’s distribution of the peace light is particularly important because of the conflict in Ukraine,” said Alexandra Trembicky Baranetsky, a board member of the New Jersey Plast Chapter. “We hope that the bright flame of this Peace Light warms the hearts and minds of those involved and fosters an end to this terrible war.”

Trembicky Barenetsky said her group would bring the light back to their home parish, St. John the Baptist Ukrainian Catholic Church in Whippany, N.J.

Father Chris Piasta, chaplain at Our Lady of the Skies, said it is an honor for the chapel to receive the Peace Light.

“This is something that we can do in a very visible way during a time when everyone is praying for peace,” he said.

Originally, the Peace Light from Bethlehem campaign was organized in 1986 by the Austrian Broadcasting Company. Since 1989, Scouting organizations in Europe used the vast continental rail system to spread the light across the continent. Canadian Scouts brought the light to New York in 2001 to place it at Ground Zero.

The Diocese of Brooklyn Catholic Committee on Scouting has helped keep the tradition of the peace light alive. It helps organize distribution and track the light on a dedicated website, peacelight.org. Members of the committee drive the light to different states distributing it along the way. One of the members of the committee, Joe Reding, takes the flame on his pick-up truck and drives it across the U.S. all the way to Texas.

Paul Stanton, chairman of the diocesan Scouting committee, served as the emcee for the airport event. He described a sense of awe at how far the light has reached in recent years. He recalled that one year a group from Mexico came to the U.S. to pick up the light and then rented a car to drive it across the border back to their home country, clearing border control.

“And somehow my name on a peace of paper allowed them to do that,” he said. 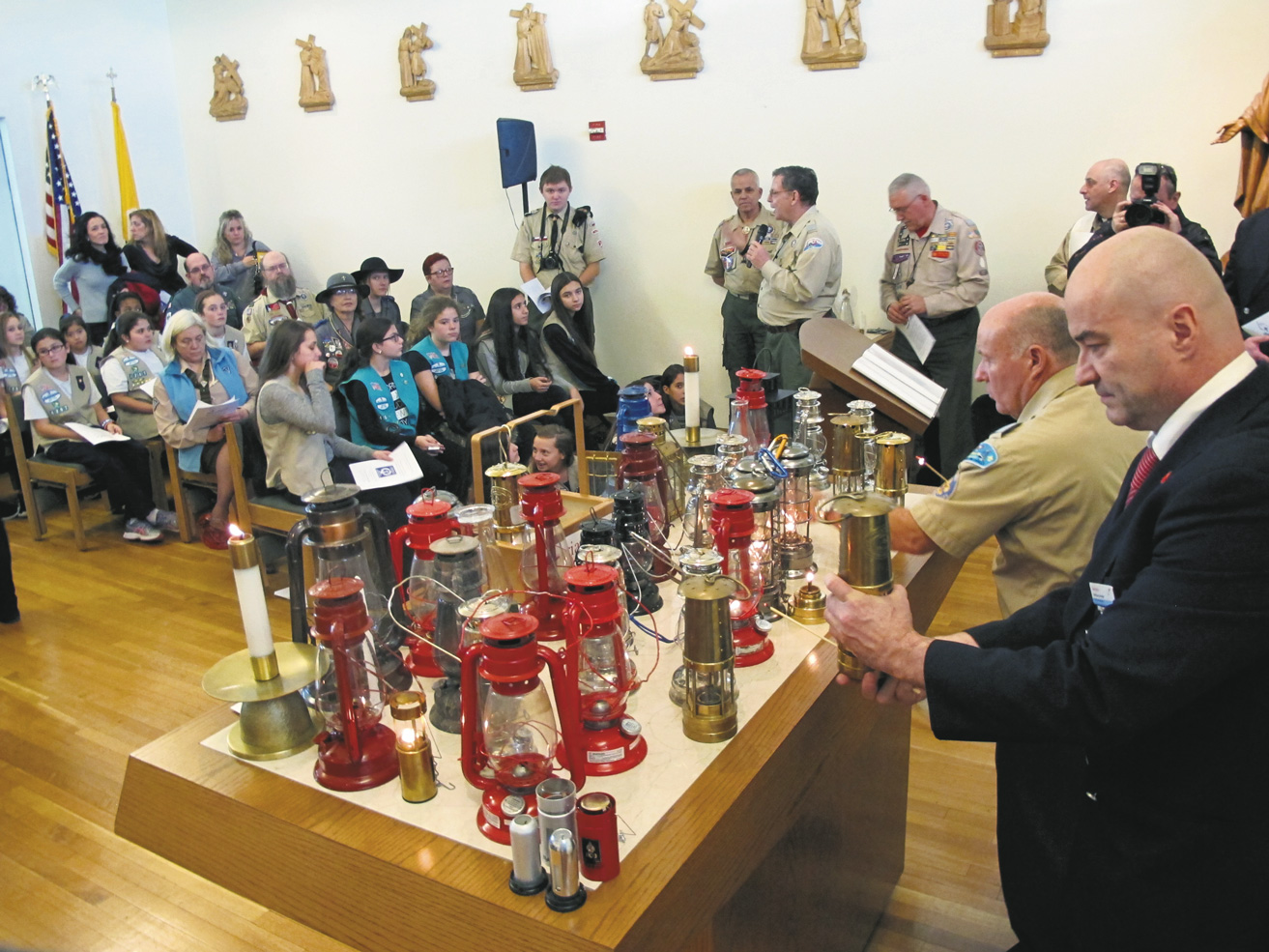 Stanton said the light crosses many borders, physical ones and cultural ones. When the diocesan Scouting committee distributes the light throughout the country, its members bring it to different faiths and organizations.

“It’s a simple thing. It’s a light. No matter where it goes it brings smiles to people’s faces,” said Brian Long, chairman emeritus of the committee. “It’s powerful because of where it comes from.”

Principal Joan Kane, of the Bayside school, came with the Girl Scouts. She said the light is an important way to help the future leaders understand the importance of peace.

“We do a lot for our community and this is a special job,” said 11-year-old scout Morgan Arma. “We are going to show it in our Christmas concert and it is important because it came from where Jesus was born.”

“It’s a way to show that Jesus is coming,” added scout Kabelle Henry, 11.

Polish Scout representatives from Brooklyn also came to the welcome ceremony. Ola Kruzel, a leader in the Scouts, said it was advantageous for her to come and meet people from other Scouting organizations that she may otherwise not have contact with. The light, she said, brings people together.

“It’s spreading the light during the Christmas season,” she said.

Louis Andres brought his nine-year-old son and his five-year-old daughter, both Scouts, from New Jersey to bring the light to their home and their community. The light will shine on their mantle at home and Andres’ mother-in-law will come to bring it to her home.

“We are not Catholic, we are Protestant, but by the same token it is a simple message of peace,” explained Andres.