ASUNCION, Paraguay (CNS) – With almost every step Pope Francis takes on his foreign trips and with his every embrace, he pleads for dialogue and inclusion.

His denunciations of a “throwaway culture” – cultures in which certain people and most material goods are deemed disposable – are passionate and well-explained in his speeches and writings. But his point is demonstrated first of all in the events he personally insists be included in his itinerary, whether in South America July 5-12, or for his upcoming trip to Cuba and the United States.

Visiting Ecuador, Bolivia and Paraguay, he fulfilled diplomatic obligations by meeting with the nations’ presidents and posing for photos with their families. He also gave each of them copies of his exhortation “The Joy of the Gospel,” which contains large sections about the moral obligations of political and economic power, as well as copies of “Laudato Si’,” his new encyclical on protecting the environment. 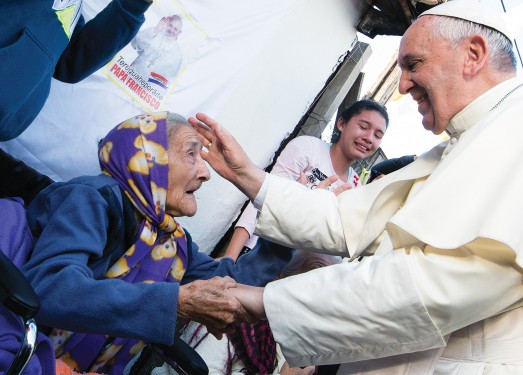 Pope Francis greets an elderly woman as he meets with people of Banado Norte, a poor neighborhood in Asuncion, Paraguay, July 12. 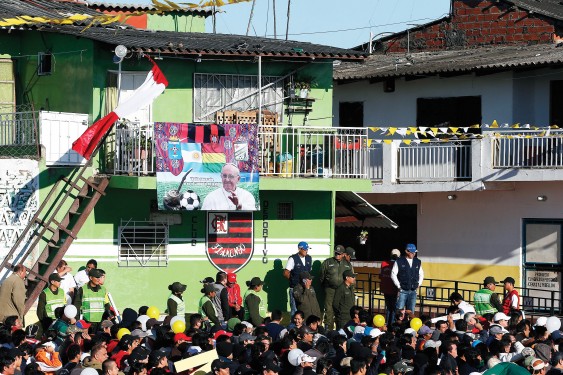 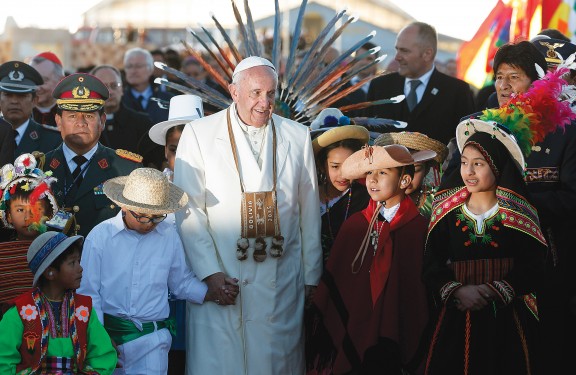 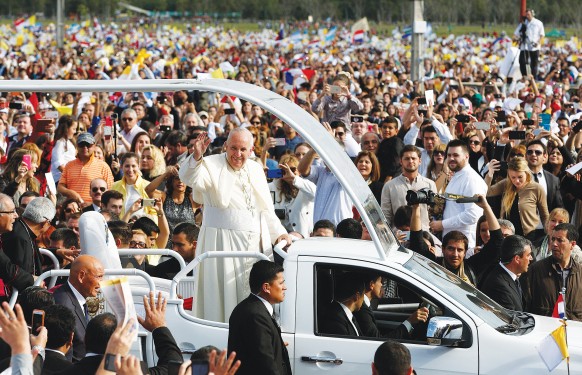 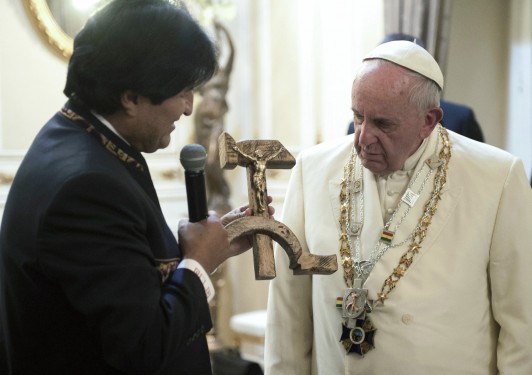 Bolivian President Evo Morales presents a gift to Pope Francis at the government palace in La Paz, Bolivia, July 8. The gift was a wooden hammer and sickle – the symbol of communism – with a figure of a crucified Christ 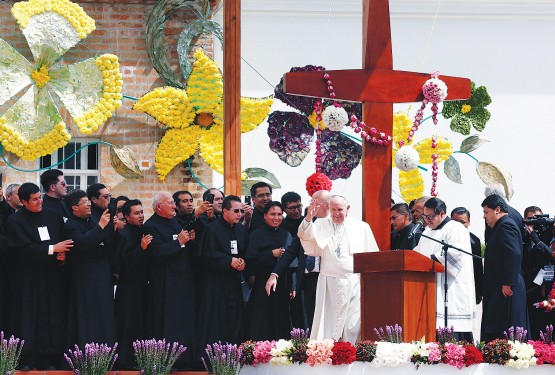 Pope Francis waves during a meeting with clergy, religious men and women, and seminarians at the El Quinche National Marian Shrine in Quito, Ecuador, July 8 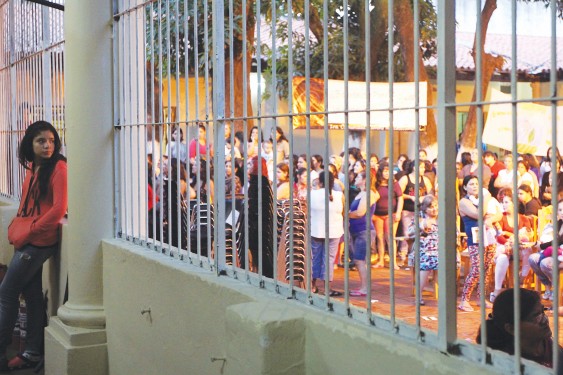 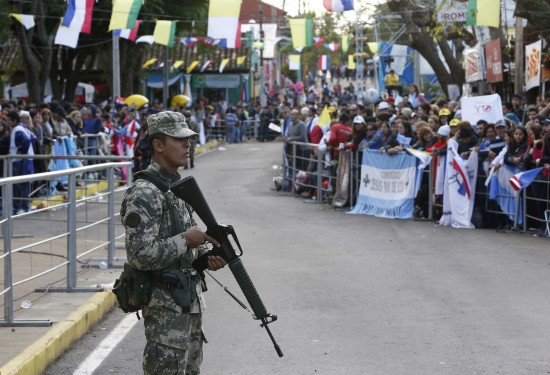 The formality of the meetings gave way quickly, though, to the heart of his trip: visits with residents of a home for the indigent elderly in Ecuador, a prison in Bolivia and a poor settlement in Paraguay. He also made unscheduled stops in Paraguay at a women’s prison and at the St. Rafael Foundation, which cares for poor patients with AIDS and cancer, runs centers for abandoned and abused children and homes for the elderly.

In many ways, the pope’s decision to travel first to Cuba in September before arriving in the United States is the same kind of choice, said Jesuit Father Antonio Spadaro, editor of the influential journal, “La Civilta Cattolica.”

“The two great ‘excluded ones’ on the September trip are Cuba and the prisoners” the pope is scheduled to visit at the Curran-Fromhold Correctional Facility in northeast Philadelphia, Father Spadaro told Catholic News Service.

The U.S. leg of the trip also will include meetings with homeless people in Washington Sept. 24 and with children and immigrant families at a Catholic school in Harlem when he visits New York Sept. 25.

Pope Francis knows that believers who are better off have a much harder time publicly acknowledging just how much their lives are the result of God’s undeserved mercy. When Pope Francis thinks about who he is, being a recipient of God’s mercy is his most important characteristic.

At Bolivia’s notorious Palmasola prison July 10, it was clear prisoners saw him as a powerful advocate who could help pressure the government to speed up the nation’s judicial process, improve the prison conditions and put an end to practices that they said amounted to buying and selling justice.

But the pope stood before them and introduced himself as “a man who has experienced forgiveness. A man who was, and is, saved from his many sins. That is who I am. I don’t have much more to give you or to offer you, but I want to share with you what I do have and what I love: It is Jesus Christ, the mercy of the Father.”

On his last morning in Paraguay, before celebrating a public Mass, Pope Francis traveled to Asuncion’s Banado Norte neighborhood, meeting families who have almost nothing and who see their humble homes repeatedly threatened each year by flooding.

The meeting was not a political rally or a cry for the government to do something. It was a celebration in preparation for Sunday Mass. He encouraged the residents in their faith, but he also allowed them to nourish his own reflection on what it means to believe in God.

The biggest headlines of the trip concerned the crucifix on top of a hammer and sickle, which Bolivian President Evo Morales gave him, and a long, complex, fiery speech Pope Francis gave in Santa Cruz, Bolivia, July 9 to grassroots organizers, including the pope’s beloved “cartoneros” from Buenos Aires. The cartoneros, who live in poor barrios on the edge of the city, go into town each night searching the streets for discarded paper they can collect and recycle.

Surrounded by his friends, who also represented indigenous groups, environmental groups, labor unions and others who live and work with the poor, Pope Francis did, in fact, call for a revolution – one in which human dignity, basic human rights and care for the Earth no longer take a back seat to profits in the world’s economic and political systems.

Pope Francis did not call for an end to capitalism, but for an end to selfishness, exclusion and an attitude that sees the “unproductive” – whether they are unemployed, elderly or the unborn – as disposable.

“If we truly desire positive change,” he said, “we have to humbly accept our interdependence, that is to say, our healthy interdependence. Interaction, however, is not the same as imposition; it is not the subordination of some to serve the interests of others. Colonialism, both old and new, which reduces poor countries to mere providers of raw material and cheap labor, engenders violence, poverty, forced migrations and all the evils which go hand in hand with these, precisely because, by placing the periphery at the service of the center, it denies those countries the right to an integral development.”

Sooner or later, he said, “inequality generates a violence which no police, military or intelligence resources can control.”

Celebrating the last Mass of his trip July 12 in Asuncion, Pope Francis went back to the basics of Christian dialogue, solidarity and inclusion.

“Jesus calls his disciples and sends them out, giving them clear and precise instructions,” the pope said. “He challenges them to take on a whole range of attitudes and ways of acting,” which could strike some people as “exaggerated or even absurd,” tempting some people “to interpret these attitudes symbolically or ‘spiritually.’”

However, the pope said, Jesus is clear. He says, “Take nothing for the journey except a staff; no bread, no bag, no money.”

Jesus teaches his disciples to receive and to give hospitality, the pope said. “Jesus does not send them out as men of influence, landlords, officials armed with rules and regulations. Instead, he makes them see that the Christian journey is about changing hearts.”

Summarizing the lessons he personally illustrated by his actions in South America, the pope told the crowd in Paraguay that Christianity is “about learning to live differently, under a different law, with different rules. It is about turning from the path of selfishness, conflict, division and superiority, and taking instead the path of life, generosity and love. It is about passing from a mentality which domineers, stifles and manipulates to a mentality which welcomes, accepts and cares.”