PROSPECT HEIGHTS — New lives as Catholic priests in the Diocese of Brooklyn await three men set to be ordained Saturday, June 4 at the Co-Cathedral of St. Joseph. The soon-to-be priests have been preparing for their vocations at the Pope St. John XXIII National Seminary in Weston, Massachusetts.

This institution is for priesthood candidates ages 30 and older to pursue “second-career” or “delayed” vocations. Their backgrounds are diverse. One is a history scholar from Vietnam, another is a New York City-born son of Chinese immigrants, and the third lived in Arkansas but has ties to Brooklyn and Queens, and a long career in banking and finance.

They are the first ordination class that Bishop Brennan will ordain for the Diocese of Brooklyn since his installation. 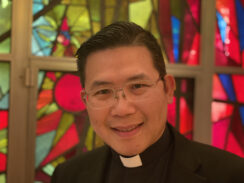 ‘My Priestly Vocation is the Mystery of God’s Love’

Throughout his childhood, he was active in his parish community, which was located in a predominantly Catholic area of the province.

He was baptized shortly after his birth in 1982, received first holy Communion in January 1993, and Confirmation in July 2007, all at Kim Thuong Parish, his home parish.

His family raised two girls and five boys, including younger brother Anh Vu, a mechanical engineer who followed a similar path to priesthood. Anh Vu is studying for the Diocese of Bridgeport where he will be ordained on June 11 by Bishop Frank Caggiano, a former auxiliary in the Diocese of Brooklyn.

Their parents, Joseph Ngon Van Vu and Theresa Xuyen Thi Nguyen, plan to travel to the U.S. for both ordinations.

Father Vu’s journey began as a teenager when his parents sent him away to a college in Ho Chi Minh City, formerly Saigon, so that he could receive a good education. He studied history.

But while there he began to feel callings to the priesthood.

“My priestly vocation is the mystery of God’s love,” he said. “During my time in college in Vietnam, I helped at the Holy Family Parish as an altar server and Catechist. I felt my vocation to the priesthood after spending time with our Lord Jesus in prayers and adoration.”

Father Vu asked his pastor about a vocation to the priesthood.

After he graduated from college, he went to the U.S to continue his vocational discernment.

Bishop Nicholas DiMarzio, now retired, admitted him into the Cathedral Seminary House of Formation in Douglaston.

Father Vu said he wants to be a priest who can “understand, sympathize with, and encourage those of different cultures and languages.”

Father Vu praised the seminary because it nurtured his “strong desire to serve.”

“I believe that our Lord Jesus Christ continues to guide, love, and support me in my vocation,” he said.

Father Vu said his heart swells with “the redemptive mission” that Jesus Christ has entrusted to his disciples: teaching, sanctifying, and governing.

“I will try to proclaim the Word of God to all people with all my efforts,” he said. “For that purpose, I will try to be a good priest in prayer, in celebration of the Eucharist, and in doing sacraments and pastoral ministry.

As a future priest and Jesus’ disciple, I dedicate my life to God and his Church to bring more people to Jesus.” 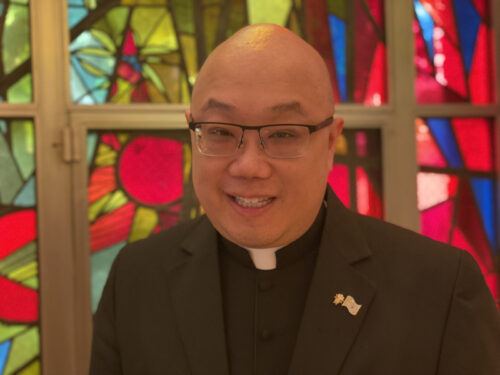 The Diocese of Brooklyn has been served by many priests from China, but Father Andrew Tsui will be its first American-born Chinese priest.

Father Tsui, born in Chinatown to immigrant parents, proudly listed the “great and holy” mentors of his vocational discernment. Included are Bishop Emeritus Nicholas DiMarzio and Msgr. John Vesey — both from the Diocese of Brooklyn, where Father Tsui will be assigned, post ordination.

But Father Tsui, 41, said his earliest and strongest mentors are his late parents — third-generation Catholics, David and Agnes Tsui.

“So it really was the Catholic faith that saved our family,” he said. “And it was on both sides of the family.”

Father Tsui described how his widowed great-grandmother on his mother’s side fled China to India during the political turmoil of the mid-1900s. Facing extreme poverty, her daughters — including Father Tsui’s grandmother — became indentured servants.

A Belgian priest helped Father Tsui’s great-grandmother find a job. The family was baptized Catholic, as was his mother, who was born in India. In the early 1960s, the family moved to Canada.

Meanwhile, Father Tsui’s father was orphaned in Hong Kong, but priests from the Salesian order gave him a home, taught him life skills, and later helped him connect with family members already in the U.S.

“If it wasn’t for that Belgian priest, my mother’s side of the family might not have survived,” Father Tsui said. “And the Salesians took pity on my dad and gave him normalcy.

Father Tsui said his parents met, married, and settled in Chinatown. There they raised their three boys — Father Tsui and his two older brothers.

His father was a groundskeeper for the New York City Housing Authority and his mother worked for a clothing retailer in Lower Manhattan. They joined Transfiguration Parish in Chinatown.

Father Tsui said he was a college student during the Sept. 11, 2001 attacks on the World Trade Center. He was not hurt, but he will never forget that day and the aftermath.

“It hit my neighborhood, it hit my parish,” he said. “My pastor, Father [Raymond] Nobiletti, was one of the first priests on the scene.”

Father Tsui counts the pastor as one of his priestly mentors because of his heroism at Ground Zero and his devotion to the parish, which he led from 1991 to 2018. Father Nobiletti died last year at age 79.

Father Tsui’s own spirituality grew in high school and college as his involvement deepened with the Legion of Mary.

“During that time,” he recalled, “I had a great love for the apostolic work, but also a great desire to grow in the grace.”

He graduated from Baruch College with a degree in education and a minor in sociology. He worked in a certified public accounting firm, but his growing spirituality led him to join a monastic community in France. There, he said, “I lived a very nice, contemplative life.”

After his father died, Father Tsui took a closer look at his own future.

He met Bishop DiMarzio who shared with him the need for Chinese-speaking priests to serve the rapidly growing Asian community in the Diocese of Brooklyn. Bishop DiMarzio arranged for him to spend time with the Chinese congregation at St. Michael’s Parish in Flushing, Queens. The pastor at that time was Msgr. Vesey, a former Maryknoll missionary to China.

Father Tsui said he learned “there’s a certain stigma within the Chinese immigrant community that Christianity is for Westerners.”

Thus, he received “a strong calling to serve the Chinese people” in the Diocese of Brooklyn. He is proud to serve as its first native-born, Chinese-American priest.

But that distinction is also humbling.

“Yes, I’m the first, but I hope I’m not the last,” he said. “I think it’s great because there is representation. Chinese people will say, ‘Hey, there’s a priest who looks like me.’ ”

Father Tsui enjoys fishing, hiking, and especially cooking. His years abroad exposed him to various cuisines, including French. He’s confident in his ability to whip up a savory meal but, he added, once he’s ordained, “I’ll prepare my best meal, which is the Eucharist.” 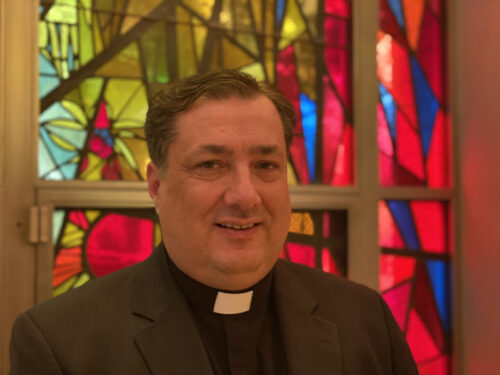 Father Alex Olszewski, 51, has a heart for Catholics whose spiritual growth has stalled. It happened to him while in high school and college, but he was always faithful to attending Mass.

Once he is ordained, the former businessman wants to help people regain their passion for the faith. Hearing their confessions, he added, is an important first step, especially for people who have been away from the Church.

“People are often afraid to go to confession,” Father Olszewski said. “But it’s like going to the doctor or the dentist. Once you finally do it, you feel so good afterward.”

Mass attendance has been declining in recent years, even before the pandemic, but Father Olszewski wants to emphasize catechesis to reverse the trend.

“We’ve lost a couple of generations, we can’t lose another,” he said.

Like many people, Father Olszewski’s faith journey has been a lifelong process.

“There was no event that made me realize what my calling was,” he said. “It has been slow and gradual.”

Father Olszewski, son of Richard and Vivian Olszewski — two Brooklynites — was born in Bangkok, Thailand. His father was stationed there in the U.S. Air Force during the Vietnam War.

The military transferred his father to Little Rock, Arkansas where the future priest spent much of his childhood. He has two brothers and a sister.

He fondly recalled how one day, while in church, his mother encouraged him to be an altar server.

“We were sitting in the front row of the church, and she pointed to a door,” he said. “It was the door to the sacristy where the priests and altar boys prepared for Mass. She told me to not be afraid, walk through the door, and I’d become an altar boy.

During his days as an altar server, he said, an idea entered his mind — to one day become a priest. It stayed there throughout his life, even while he strayed from the Church.

The family returned to New York City where the son attended St. John’s Preparatory School in Astoria, Queens. Later he attended Manhattan College, but eventually transferred to a familiar setting — the University of Arkansas at Little Rock. There he earned a degree in finance. He subsequently worked 15 years in banking, specializing in financing for agricultural operations.

“I had an enjoyable job,” he said, “and could do whatever I wanted: ski, golf, tennis …

That period of my life was also the most empty. Living for yourself is the surest path to an unfulfilled life.”

Father Olszewski said that he took his eyes “off heaven and began looking more at the world,” although he never abandoned weekly attendance at Mass.

“Looking back, I think weekly church attendance was a big factor in my vocation,” he said. “Sunday Mass is like that lifeline that connects the astronaut to the space capsule. Without it, you will drift away.”

His priestly aspirations eventually resurfaced in his 30s but then his mother was diagnosed with cancer, so he quit his job to help take care of her.

“Over the years of her sickness, I spent a lot of time in Sloan Kettering cancer hospital,” he said. “Being around the dying focuses the mind on eternity like nothing else.”

Doctors said she only had a couple of years to live, “but, by the grace of God, her time on earth was extended beyond what was expected.”

When his parents died within a month of each other in 2015, he accelerated his vocational discernment. Still, he noted, the process was difficult; he questioned his worthiness, and whether his vocation was real.

“The answer to both questions is ‘no,’ ” he said. “We’re not worthy, but that’s ok. God calls the imperfect.”

Asked if he was excited about his ordination, Father Olszewski responded without hesitation.

“But I think of what my mother would say: ‘Don’t be afraid, walk through that door, and you’ll become a priest.’ ”