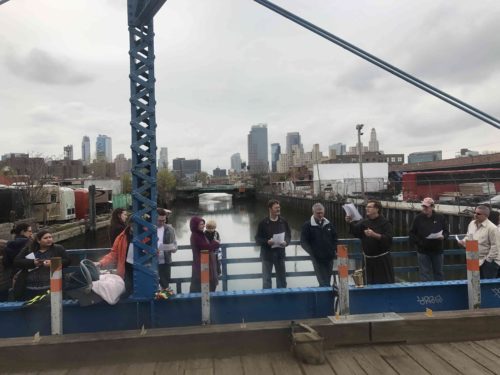 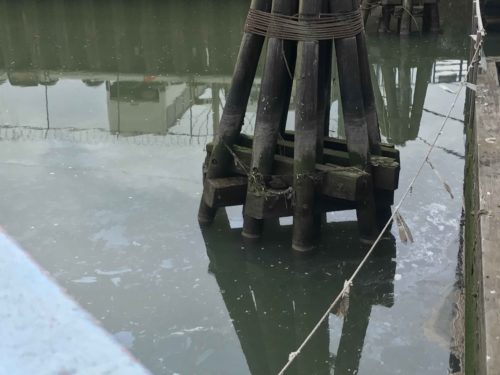 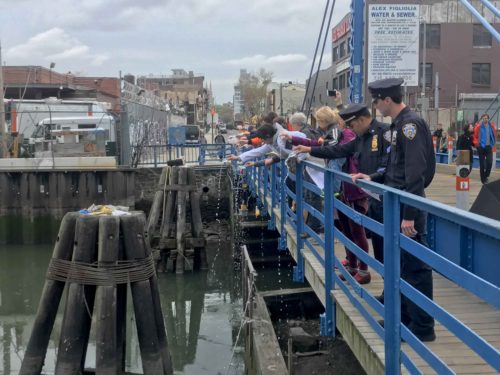 On Earth Day, a small group of people stood on the Carroll Street Bridge above the Gowanus Canal. They prayed, sang and blessed the canal with holy water.

Father Brian Jordan, O.F.M, chaplain at St. Francis College, Downtown Brooklyn, shared his hope that he would soon be able swim in the canal, once dubbed the dirtiest waterway in the country.

The canal has been polluted for about 200 years as industrialization in Brooklyn created a need for waste disposal. Although originally a natural passage, the canal has been deepened to allow for cargo ships to pass through.

At its commercial height, 100 cargo ships would pass in a day. A large part of the problem was that the canal is a dead end and the flow-through water has been paved over, thus trapping coal-tar, blood from local slaughter houses, raw-sewage and other waste.

Though the area is no longer as much of an industrial hub as it once was, the canal remains dirty. In 2013, tests revealed high amounts of fecal matter, since raw- sewage was known to over-flow into the canal, to the extent that E. coli and typhoid bacteria was also found.

The federal and local governments both expressed concerns over the canal and it was designated a super-fund site by the Environmental Protection Agency.

Ann Ruggiero, a parishioner of Our Lady of Peace, Park Slope, said she grew up just up the block and could smell the canal’s odor from her house.

She has seen improvement. The odor disappeared for a couple of years and is not detectable even when standing right above the water. However, the water is still visibly dirty and Ruggiero hopes for more progress. She was among those who blessed the Gowanus.

Father Jordan said the government has started something, but the people of the community must not give up.

Alison Dell, a biology professor at St. Francis College, came to the blessing with a pin identifying her as a member of the Union of Concerned Scientists. She said it is important for members of the scientific and faith communities to come together to tackle environmental problems.

“Praying can go a long way,” said Celina Santin, vice-president of the St. Francis College Environmental Club. She said it’s important to see that nature is still present even in this highly industrialized area of Brooklyn.

Despite its highly toxic environment, the Gowanus Canal has been able to sustain life. Bioengineers identified microbial communities in the white foam in conditions previously thought incompatible with life. These life-forms have adapted to the unique conditions in the canal and some have adapted to consume the pollutants, effectively cleaning it on the microbe level.