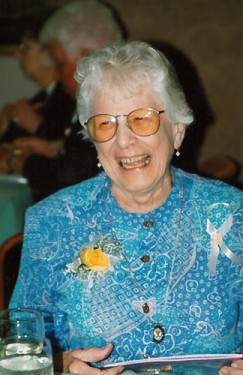 Sister Margaret Williams, C.I.J., a member of the Nursing Sisters of the Sick Poor for 73 years, died on May 11 at Villa St. Joseph, Rockville Centre. She was 92.

She ministered to the sick poor from the Motherhouse on Henry St., Brooklyn, and St. Francis de Sales Convent, Bay Ridge, and as a social worker at Maimonides Hospital, Borough Park.

When a family of one of the sisters was bereft of a mother who died too young, Sister Margaret stepped in to care for the three children so that the father could work and provide for the family.

When the children were older, she returned to her ministry and served as director of personnel with the Nursing Sisters Home Visiting Service.

In 1966, she represented the congregation on the first Sisters Senate in the diocese.

Following her retirement, she volunteered with the Good Shepherd Sisters in Boston, the Dominican Sisters in Caldwell, N.J., and the Holy Child Sisters in Rye, sharing her expertise in the care of the aged Religious.