PROSPECT HEIGHTS — On the feast of Our Lady of Fatima, Bishop Robert Brennan joined the call from bishops around the country and asked the faithful to fast and pray the rosary on May 13 for peace in Ukraine and for respect of human life.

“We pray also for a certain kind of peace,” Bishop Brennan said Friday in a video message at the Co-Cathedral of St. Joseph. “A peace with a great respect for human life, especially in these days as the Supreme Court decision draws near. We pray for respect for life in our nation, for a transformation of hearts and minds and for our commitment to work with women and with families in time of need. Let’s join together in solidarity and in prayer.”

In a reminder to New York Catholics that abortion access will likely go unfettered in the state regardless of federal rulings, the state’s bishops are calling on the faithful to advocate with charity, sensitivity, and clarity, and to reaffirm the Church’s commitment to walking with pregnant mothers.

The call comes in a new statement, “Toward a Pro-Life Future in the Empire State” issued by the Catholic Bishops of New York State on May 12, where they assess the current situation and envision a path forward for a state, which is considered the abortion capital of the world.

In the statement, the bishops argue that the pro-abortion movement’s framing of abortion as an issue of “choice” and “reproductive freedom” ignores “the biological reality of what abortion is: The intentional killing of an innocent child in the womb.”

“Millions of our fellow Americans — even, it must be said, many of our fellow Catholics — have succumbed to this false notion, and we must respond to it in charity and with sensitivity, but with clarity,” they said.

The bishops also used the statement to reject notions that Church leaders are more concerned with the baby in the womb than with the mother and child after the baby is born. To do so, they reaffirmed a pledge made by the late Cardinal John O’Connor of New York, who was a staunch and outspoken leader of the pro-life movement.

“Any woman — regardless of age, religious belief or affiliation, marital status or immigration status — who is pregnant and in need, can come to the Catholic Church and we will give you the services and supports you need to carry your baby to term,” the New York bishops said.

“Furthermore, we will not abandon you and your baby after delivery, but, rather, we will see to it that you have the resources that you and your child both need and deserve,” they continued. “No one will be turned away from this life-affirming care.”

It comes at a time of growing national tensions after a leaked Supreme Court draft opinion that would overturn Roe v. Wade — the landmark 1973 decision that legalized abortion nationwide — and put abortion law solely in the hands of the states.

“As we await a decision on Dobbs v. Jackson Women’s Health Organization, the recently argued Supreme Court case that could potentially overturn Roe, we pray for a positive outcome even as we acknowledge that abortion in New York would continue unfettered, and even be actively promoted as a social good by many elected officials,” the New York bishops said.

Abortion is legal in New York through nine months of pregnancy, and it’s one of the few states to require taxpayers to fund abortion through Medicaid. On Tuesday, May 10, Gov. Kathy Hochul reaffirmed that New York will be a haven for anyone seeking an abortion nationwide, and announced a new $35 million investment to support abortion providers in the Empire State in anticipation that the Supreme Court will overturn Roe.

In the statement, the New York bishops lament the stream of pro-abortion legislation and funding the state has seen in recent years, as well as the lack of funding and promotion of programs to support women who choose to keep their babies.

The bishops also question why they can’t work together with New York lawmakers to reduce the rate of abortions given the reality that the Supreme Court’s decision on Roe won’t affect abortion laws in New York.

“There is common ground to be found, even in a state like New York,” they said, citing the recent state budget provision that expands postpartum Medicaid eligibility.

The bishops also presented a list of 12 aspirational statements of what they hope can be achieved. They envision a New York where:

“All of these goals can come to pass, even in a state like New York, “ the statement added. “Let us not put out trust in mere judges, legislators, governors, or presidents. Rather, let us put our faith in God, for whom nothing is impossible. Politicians can change policies and laws, but only God can convert hearts and minds.”

“So, in this month of Mary, mother of Jesus and mother of us all, let us pray through her intercession for an end to abortion in our lifetime and let us work toward making New York a state where even if abortion is not illegal, it will one day be unthinkable.”

To read the bishops’ full statement, click on the image below 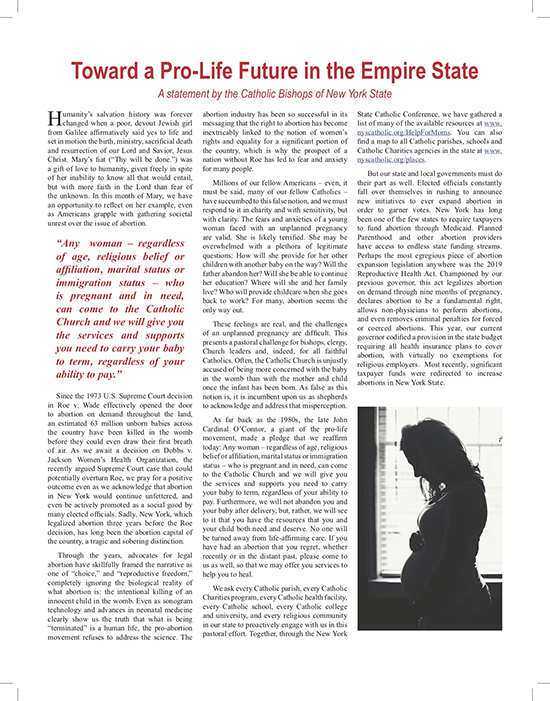