After joyously entering the Church at the Easter Vigil, the question on the minds of many newly initiated Catholics is: What comes next?

Neophytes from nine parishes in Queens came together to reflect on that question during a mystagogy day of retreat, hosted by Queens Deanery 4 at Mary’s Nativity Church, Flushing, April 22.

“The deanery is supposed to be a place where different parishes work together, help each other, share resources,” said Sister Terry Agliardi, R.S.M., pastoral associate at St. Luke Church, Whitestone.

“So we felt this was an opportunity … to bring together new Catholics to see the Church is universal.”

Sister Terry has been planning the day since last fall with a committee of laity, religious sisters and deacons representing each of the parishes.

For Catholics who enter the Church through the Rite of Christian Initiation for Adults (RCIA), mystagogy is a period of formation after receiving the sacraments of initiation. It is an ongoing process of learning the mysteries of the faith, growing closer to Christ and reflecting on the call to mission and ministry in the Church.

Focused on the theme, “The Spirituality of Mission and Ministry,” the afternoon included keynote talks, testimonies, group discussion and Mass, before closing with a dinner of Chinese food, an intentional nod to the majority of neophytes present.

Parishes in the area realize that in recent years, those entering the Church in northeastern Queens are largely Chinese and Korean, explained Sister Terry. Organizers wanted to acknowledge that by serving a Chinese meal.

“This is part of the transformation of people’s thinking, how people need to think about the future,” she said.

“The people in this room are the future of this deanery and we need to acknowledge it, appreciate it, respect it and stand firm with it.”

Keynote talks were offered in each language and focused on the idea of mission and the call of the newly initiated to go forth and proclaim the Good News.

Father Joseph R. Gibino, coordinator of the diocesan secretariat for evangelization and catechesis, and pastor of Holy Trinity, Whitestone, addressed the English-speaking crowd.

“If we’re talking about the mission and ministry of the Church, there is an element of the Easter season we really have to be thinking of – and that is the element of joy,” said Father Gibino.

“We are called to be the peppy, perky people of God, because no one would be interested in the mission and ministry of Jesus if it were truly a hardship.”

Christian love and a joyful attitude are outward signs that someone is filled with the overflowing love of the Holy Spirit, Father Gibino said. And that means beyond being peppy and perky, living the mission and ministry of Jesus in a real and practical way.

Using Scripture, history and anecdotes, Father Gibino encouraged the group to explore unity, truth, goodness and beauty as ways of growing in relationship with God and others.

He offered examples of Jesus’ interactions with His friends, Martha and Mary – being present to them, listening as they laid down their burdens, weeping alongside them and rejoicing with them. All are ways Catholics today can accompany family, friends and neighbors on their path toward God.

Following the keynote, Irene Katsamanis shared her conversion story with the English-speaking group. Born and raised Greek Orthodox, she spent years researching the Roman Catholic tradition before coming to the conclusion that it was the one, true Church.

Four years after entering the Catholic Church at St. Ann parish, she said there is still so much she has to learn. “This isn’t the end of your faith journey,” she told neophytes. “This is the beginning.”

Time was devoted to group reflection and discussion for leaders to gain insights into what new Catholics would like the Church to offer to keep them motivated and moving forward.

“Listening to people sharing – and all these people are newly baptized and we all found the true God at the same time – it reaffirmed my faith,” said John Teng of St. Michael Church, Flushing, who spoke through a translator, his RCIA catechist Rosa Yen.

As new immigrants from China, Teng and his family first heard the name of Jesus from his wife’s aunt and uncle. They learned about the Catholic faith, started attending Mass, and eventually decided to give the RCIA a try.

“For some reason, I don’t know how to explain, but I feel like this is really the true God and I really want to worship Him,” he said. “Especially as a new immigrant, I feel in my heart I need a shoulder to lean on.”

Taking part in the retreat, Teng said, helped him see that more than just receiving the gift of faith, he has to share it too.

“I realized my responsibility as a Catholic for evangelization. We have so many Chinese that don’t know Jesus Christ yet, so I feel like we need to do more and evangelize more,” he said.

Faith formation leaders listened and took notes as attendees expressed interest in: hearing homilies relevant to modern life; finding ways to share their skills and talents, which may not fit the traditional way parishes have done things; and having ministries in their own languages. 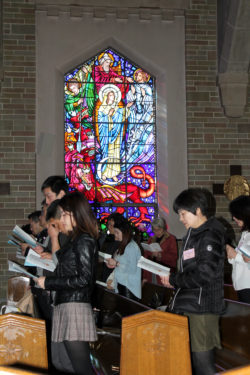 Denise DeRosa, religious education director at St. Mel’s, Flushing, reminded attendees that if they ever need guidance, or have questions, the faith formation team at their home parishes are there to help.

“It was nice to have all the communities together, all the different churches, cultures, languages. That was really beautiful,” said Carla Farina, who received first Eucharist and Confirmation at St. Luke’s Church.

She said she saw that beauty most clearly at Mass, where the four languages spoken by those present were incorporated throughout the liturgy and especially, the music. “That connects us,” she said. “It’s nice to be a part of that.”

Baptized as a baby in Argentina, the young woman said she always wanted to complete her sacraments.

“This last couple of years, I was able to do it, and I had Sister Catherine (Burke, C.S.J.) to help me through the process and answer all of my crazy questions. It was the right time,” she said.

“I still have a lot more questions,” she added. “I think it’s going to be a journey for many years, a lifelong journey. There’s definitely a lot I need to learn.” 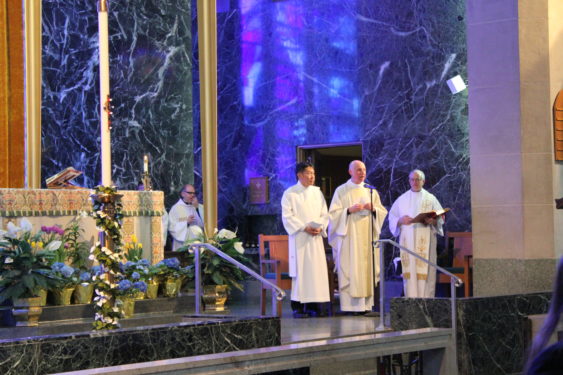 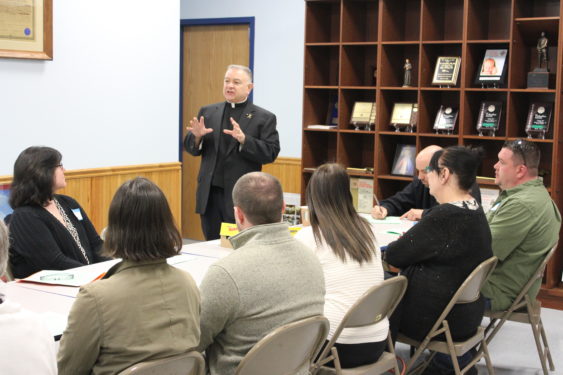 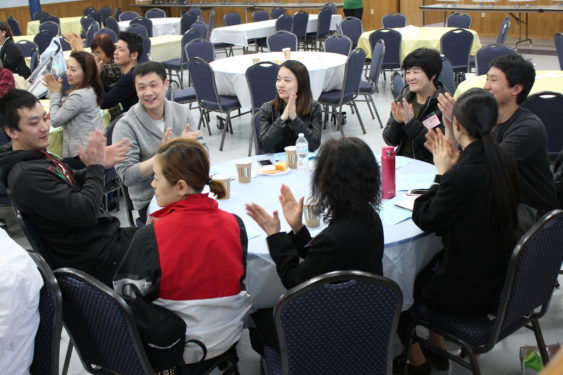 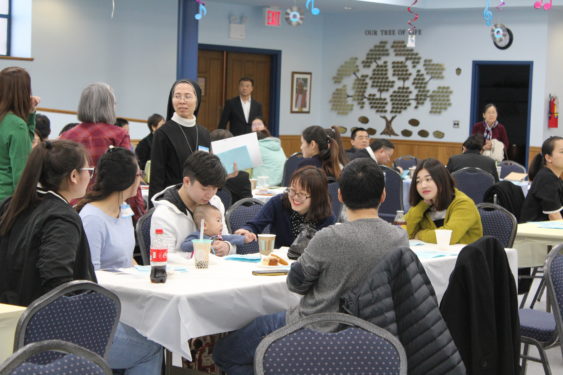 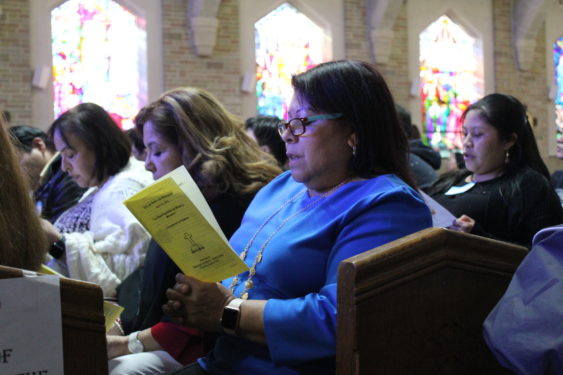 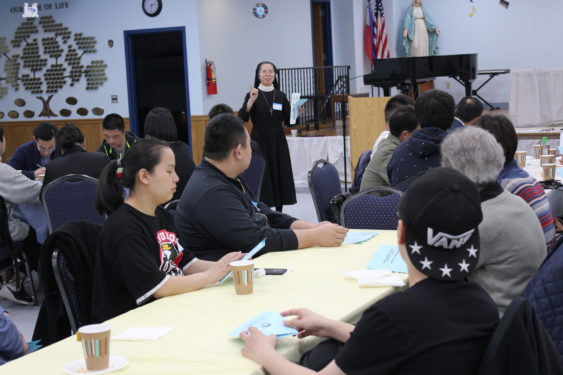 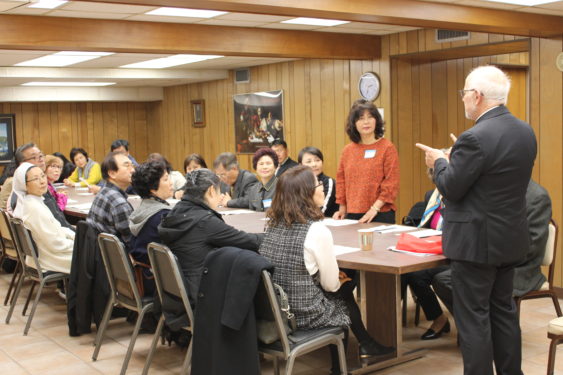