Fresh flowers, fragrant incense and hymns welcomed the first-class relics of Lebanese St. Sharbel Makhlouf as they entered the Holy Doors of Our Lady of Lebanon Maronite Cathedral, Brooklyn Heights.

Subdeacon Norbert Vogl and Subdeacon-Deacon Candidate Peter Frangie carried an ornate wooden box containing the mortal remains of the Eastern Catholic saint in an outdoor procession from the rectory to the church. Msgr. James A. Root, cathedral rector, incensed the relic as it passed through the jubilee doors and up the main aisle before being placed at the foot of the altar.

The relics are on their first U.S. tour to mark the 50th anniversary of the saint’s beatification. At the Brooklyn Heights’ cathedral, the April 9-10 visit was a major highlight of the Year of Mercy and observed with two days of devotions, including several Masses, a healing service, nocturnal adoration and opportunities for the sacrament of reconciliation in Arabic and English.

Maronite Bishop Gregory J. Mansour took a few moments to venerate the relics early Saturday before spending much of the morning hearing confessions for parishioners and visitors alike.

The cathedral also welcomed Dafne Gutierrez, an Arizona mother who offered her testimony of regaining her sight through St. Sharbel’s intercession after praying before his relics in January. She stayed a few days after the relics left to bring her story of healing to families in the parish.

Born Youssef Antoun Makhlouf on May 8, 1828, St. Sharbel was raised in a poor, but devout family in northern Lebanon. Ordained a Maronite Catholic priest on July 23, 1859, he took the name Sharbel, or Charbel, in honor of a second-century martyr. He lived an ascetic life as a hermit for 23 years until his death on Christmas Eve, 1898. When his body was later exhumed, it was found not only to be incorrupt, but also secreting blood and sweat.

Pope Paul VI beatified the monk at the conclusion of the Second Vatican Council, and canonized him on Oct. 9, 1977. His feast day is July 23.

Thousands of graces and miracles have been attributed to the intercession of St. Sharbel, called the Padre Pio of Lebanon by some, and likened by others to St. Therese of Lisieux for his widespread influence though he never left his hermitage. His reputation for holiness has encouraged people of all faiths, ages and ethnicities to seek his assistance in bringing their petitions before God.

“We witness so often the mercy, love and compassion of our Lord and Savior Jesus Christ,” Msgr. Root told nearly 50 people in the congregation at the 10 a.m. Mass April 9. “Our God does love us, and helps us and sustains us … through the lives and the actions of the saints, who are our intercessors.”

Referencing the parable of the weeds among the wheat in the morning’s Gospel, he explained, “Sharbel listened to the Word of God. Sharbel didn’t allow the weeds to hinder him and his love and his faith for Almighty God.”

“Here is a man who never left his hermitage for 23 years,” Msgr. Root said, and yet, he “has touched so many hearts, interceding for them.” 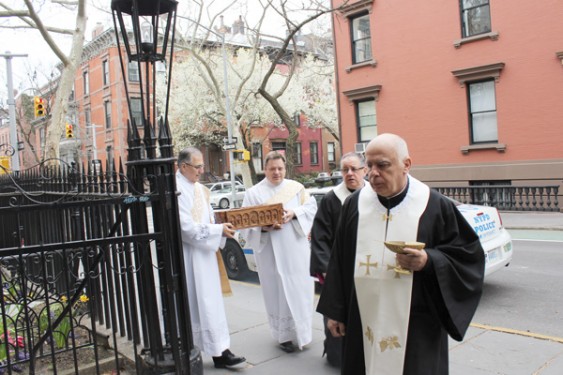 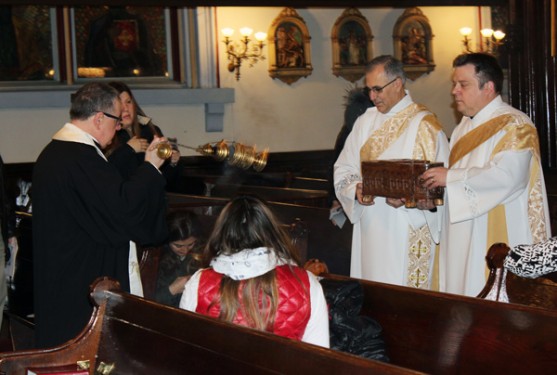 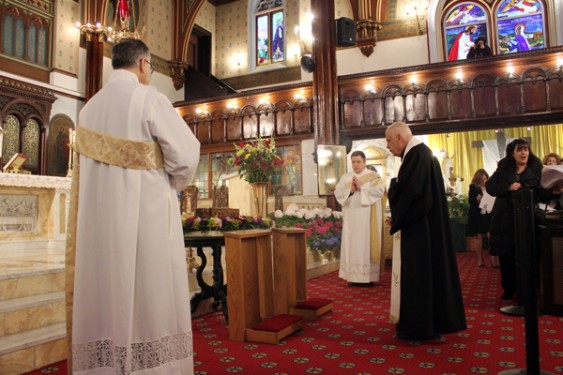 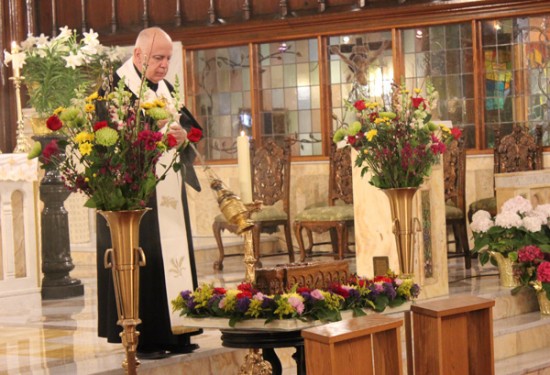 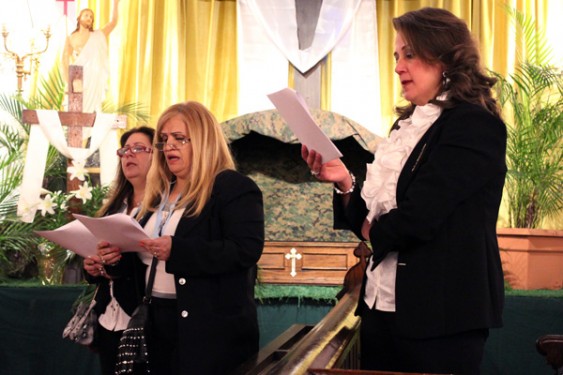 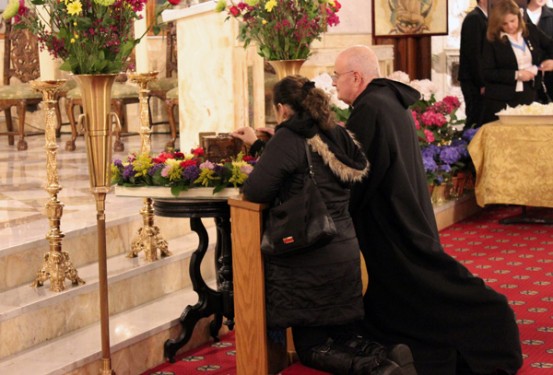 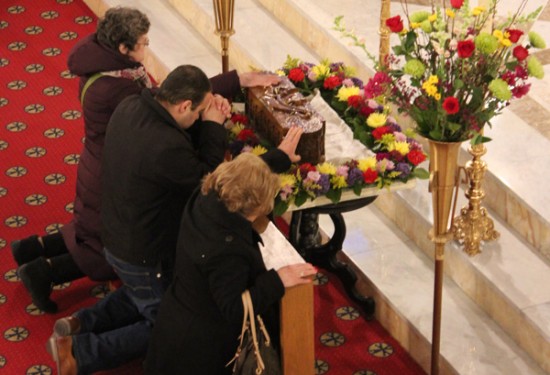 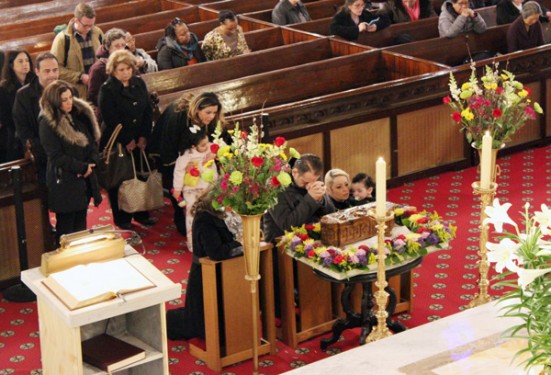 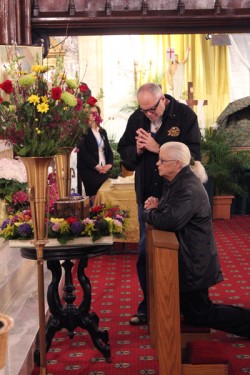 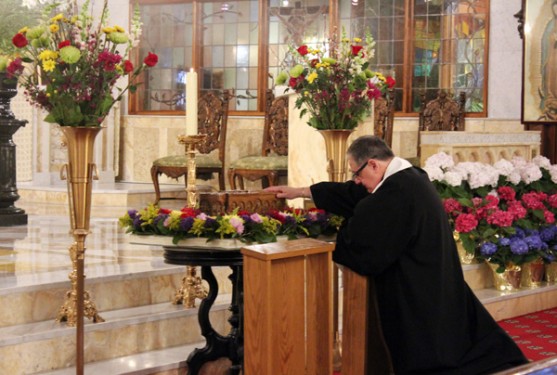 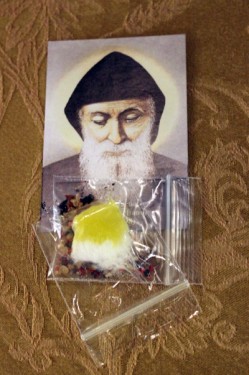 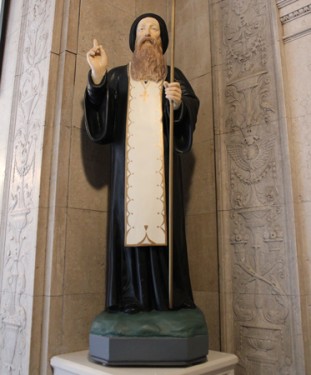 Though Sharbel’s miracles span decades and continents, with Dafne Gutierrez as perhaps the most recent recipient of his good works, the monsignor reminded the faithful that it isn’t all about “signs and wonders.”

“We also must seek out holiness, spirituality, a true metanoia, a true change of heart, a conversion, in order to allow God to work within us and among us,” he said.

Parishioners and visitors from the New York metropolitan area sought out the 19th-century saint at the cathedral. His remains were contained in a hand-carved cedar wood box.

“It is a replica of his casket,” Msgr. Root noted.

Surrounded by fresh flowers, the reliquary rested upon a wooden table as devotees presented themselves, two by two, to offer prayers of petition and thanksgiving.

“You come with a purpose in your hands and your heart, and he touches us in different ways,” said Aida Abundo, a parishioner from St. Teresa, Woodside.

As she venerated the relics, she prayed for her father and mother, ages 94 and 85, respectively, and her sister back home in the Philippines who takes care of them.

“For those of you who are not Lebanese or Middle Eastern,” Msgr. Root explained, “it is very common for us to give blessed incense as well as holy oil with the veneration of relics of our saints.”

Among the crowds, he recognized parishioners but also many new faces, people of all ethnicities who “know Sharbel and are seeking his assistance.”

Sabrina Ridore, Elsie Louis and Evelyn Audouin from Mary, Queen of Heaven parish, Old Mill Basin, read about the visiting relics in The Tablet and decided to attend.

“This is my first time hearing of this saint,” Louis said, but she was moved by his life story and the way he removed himself from the world to grow closer to God.

Audouin was more acquainted with Sharbel, and planned to spend the entire day with him at church. She brought a prayer booklet from St. Sharbel Chapel in Port-au-Prince, Haiti, so she could offer prayers in her native Creole language.

Angela, a single mom from Ascension parish, Elmhurst, first heard about the Lebanese saint last year, and is following his relics on their U.S. tour. She saw them at their previous stop in Connecticut.

“I’ve been learning his story as I go,” she said, “and there’s something in him that calls me to follow his steps … to follow the steps of Jesus in purity and love. That’s what I’m trying to do.”

She knelt before the wooden box shortly after it arrived and tears filled her eyes. She prayed for healing for herself as well as her son and daughter.

“I’ve sinned in many ways and I think I’m finally understanding that God is merciful,” she said. “I’m asking God, through St. Sharbel, to heal me of my wounds, to help my daughter find the light and to turn her life around.”

Thomas Upshur from St. Mary of the Isle parish, Long Beach, L.I., also asked the saint to intercede in the lives of his children.

“I come here today to offer my children to him that they may receive the light of Christ because they’re so far away,” he said.

Because of pressure from the outside world, he said, “they lost sight of Christ. I just want His light to be bright for them again.”