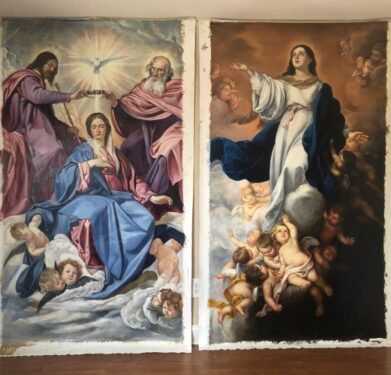 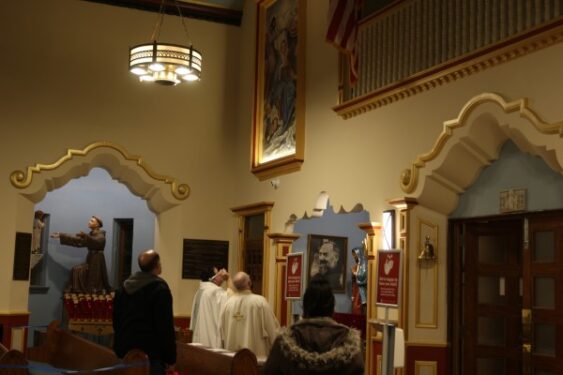 “The Coronation of the Virgin” painting, pictured here, was blessed by Father Vincent Chirichella and Deacon Philip Siani on Dec. 7. (Photos: Erin DeGregorio) 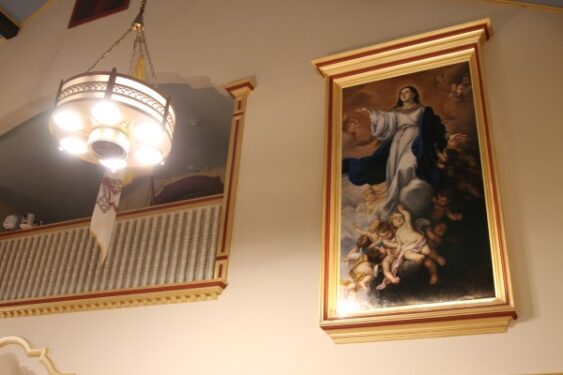 “The Assumption of the Virgin 1670” hangs high above. 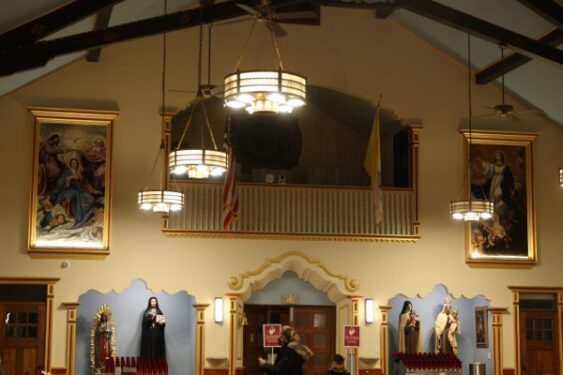 The paintings of the Blessed Virgin Mary are two of the many new additions Our Lady of Grace’s church has invested in, under the vision and leadership of Father Vincent Chirichella.

GRAVESEND — Two beautiful paintings of the Blessed Mother were blessed at Our Lady of Grace (OLG) Church on the eve of the Immaculate Conception. They depict the Assumption and the Coronation of the Blessed Virgin Mary and are now located high above either side of the church’s doors upon exiting.

OLG’s pastor Father Vincent Chirichella said he picked this feast day because of what it means to him and the Catholic faith.

“It is the highest solemnity and honor of the Blessed Virgin Mary … as it’s the biggest Marian feast day of the year,” he said during his homily on Dec. 7. “I chose this night on purpose because it is me telling the Blessed Virgin Mary how much I love her and how thankful I am to her for helping me and helping us take care of this beautiful parish in Gravesend.

“She was human, but she was set apart and chosen by God for a special mission,” Father Chirichella added. “And that mission was to be the mother of Jesus Christ. Because of that honor given to her, we celebrate her, love her, cherish her — just like we love and honor our own mothers.”

A Vision Comes to Life

These paintings were part of Father Chirichella’s vision nearly six years ago when he became OLG’s new pastor. He wanted to make the church more beautiful through renovations, and restorations.

Five hundred thousand dollars was raised to help make the idea become a reality through the diocese’s Generations of Faith Capital Campaign that began about five years ago, as well as through OLG parishioners’ additional donations. The two paintings were part of a larger renovations project at OLG, which included a new grotto, a new baptismal font, and the recently renovated Saints Chapel, which now features at least six restored statues.

Father Chirichella explained that his brother Michael first met artist Adam Cross two years ago while volunteering and feeding the homeless with St. Francis Breadline in Manhattan. When Michael began talking about OLG, Cross told him that he was also a painter who creates religious artwork. Cross was later asked to restore OLG’s reredos that depicts the church’s patroness.

“Somehow God sent that artist to me,” Father Chirichella said during his homily. “Surely, our church is alive, and not even the coronavirus could stop us from rebuilding, renewing, regenerating life here at Our Lady of Grace.”

Speaking with the Artist Himself

Cross began painting in 2005 and received his MFA in painting from the New York Academy of Art in 2014. He said it was the first time in his career that someone had sought out his talents — since he had normally donated or sold his religious artwork to places of worship.

Cross spent the last year working on the massive Blessed Mother paintings project, explaining that the pandemic helped him focus and complete the project on time. His Assumption image was inspired by Bartolome Esteban Murillo’s “The Assumption of the Virgin 1670,” and his Coronation image was inspired by Diego Velázquez’s “The Coronation of the Virgin.”

Unlike other projects that he first paints and later frames, Cross had to sketch and paint the scenes within provided wooden frames. He used the finest oil primes and Belgian linen canvas, which, he said, were expensive but worth it to use. “It just transforms your painting when you’re almost using the same tools the artists did during their time,” Cross noted.

He said that although it was quite the task to recreate such masterpieces, it was a great learning project.

“It’s like you’re there with the master when you’re really studying them,” Cross said. “I get into reading about how the masterpieces were created, the materials the artists used, and I try to make them as historically accurate as possible using the same materials. That, for me, is just so interesting.”

He further explained, “With Velázquez, I researched his medium, looked at the technical analysis of the actual painting from the museum where they x-rayed every layer, found out what pigments he used, and searched to find those types of paints.”

Though he couldn’t be there in person to see his paintings be blessed, Cross was there for the installations on Dec. 4. He told The Tablet that the happiness they’ll bring to others is important to him.

“This is why I went to art school after renewing my relationship with God,” he said. “I had this overwhelming desire to decorate churches and use my gifts to glorify God. To have that opportunity to have my work out there and to bring glory to God is just the greatest feeling for me in the whole world.”

One thought on “New Blessed Virgin Mary Paintings Installed, Blessed at Our Lady of Grace”