St. Joseph’s Co-Cathedral, Prospect Heights, reverberated with the sounds of the 18th century when Mozart’s Requiem was performed as part of a 9/11 remembrance liturgy.

Bishop Nicholas DiMarzio was the main celebrant of the annual liturgy for the 23 members of FDNY Battalion 57 who died on Sept. 11, 2001 in the terrorists’ attacks on the World Trade Center.

The two-and-a-half hour ceremony, concelebrated by Msgr. Kieran Harrington, rector of the co-cathedral, featured a 42-piece orchestra from the Foundation for the Revival of Classical Culture and an 80-voice Schiller Institute New York City Community Chorus. 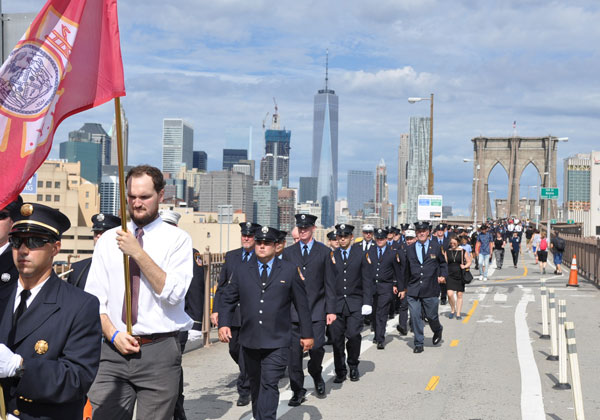 Prior to the Mass, members of the Battalion, which includes five engine companies and one ladder company in Brooklyn, marched from Ground Zero in Manhattan, over the Brooklyn Bridge, to St. Joseph’s Co-Cathedral, making stops at several firehouses along the way.

They carried FDNY flags, one for each of their fallen members. For the firefighters, the journey to Brooklyn served to symbolize to return home of their fallen comrades, said Firefighter Thomas Callahan, who delivered opening remarks at the church. Once the procession reached St. Joseph’s, each name was read aloud as the flags were brought one-by-one into the church.

“We come to remember those who gave their lives for others, just as Jesus did for us,” said Bishop DiMarzio in his homily. “There is no greater love.”

Retired Fire Commissioner Sal Cassano said that he had often wanted to attend this annual liturgy for the members of Battalion 57 but for various reasons could never make it.

“Something drew me here today and I feel so honored to be here,” he said.

He called the Mass “a wonderful experience,” and said that it is a sign of what makes the country so great, that in places all across the nation these types of remembrances go on not only for the people who died during the attacks on America, but also for those who continue to die from illnesses suffered during the clean-up of the sites.

Attorney Ron Russo of Brooklyn said the liturgy was “a very moving experience.”

“The pain is still so raw,” he said. “You can still feel the pain of the families who lost loved ones. I only hope that they can find some comfort and consolation from this.” 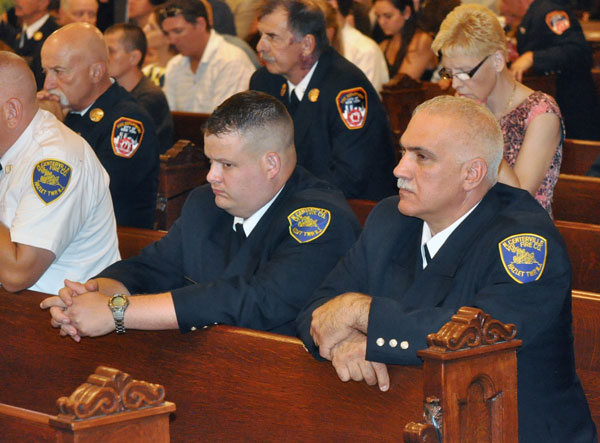 Mozart’s Requiem, rarely sung as part of a Mass, was performed in January, 1964, at Boston’s Cathedral of the Holy Cross, at the request of Jacqueline Kennedy, in memory of her husband, President John F. Kennedy, who had been slain two months earlier.

3 thoughts on “Mozart Adds to Local Sounds of Remembrance”