An Egyptian artist specializing in Byzantine-era iconography, Fayez is visiting Brooklyn for the first time this summer. His twin brother, Father Francis Fayez, is the pastor of Resurrection Coptic Catholic Church, Park Slope.

The artist will exhibit his vast array of artwork in the chapel of St. Thomas Aquinas Church, Park Slope, Aug. 19.

Surrounded by several of his vibrantly colored pieces inside the chapel on a recent morning, he spoke about his calling as an iconographer, a Greek word that literally means “image writer.”

“I write icons to portray the Word of God to people interested in being closer to God, whether they’re educated, uneducated or just curious,” he explained through a translator. “This is an art of liturgical education, like prayer and Mass.”

Ayman began writing icons in 1987, and honed his skills under the direction of French, Italian and Greek artists. While he has studied the techniques and methods of various schools, he specializes in the Byzantine era because he feels it offers “a more realistic portrayal” of the figures as well as “a more sacred and spiritual feel.”

Unlike other art forms, it is understood in iconography that the artist is not the creator of the artwork, but rather the channel through which the art unfolds.

“In this way, the artist becomes the medium, and the image and icons created come from the Holy Word, rather than from the imagination of the artist,” Fayez said.

His body of work includes images of Christ, the Blessed Mother and narrative scenes from the Bible on canvas and wood. Each work is steeped in rich symbolism, which distinguishes this art form, beginning with the materials and processes used, to the final icon itself.

Prayer, Fayez said, is the starting point for each piece. He reflects on the Biblical chapter or verse he plans to portray, and remains in prayer as he stretches plain fabric, which represents Christ’s garb, across a wooden frame. 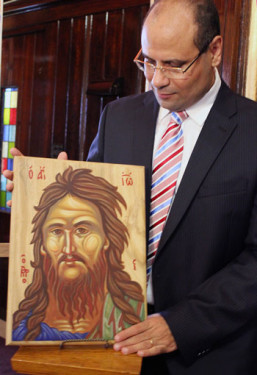 Egyptian iconographer Ayman Fayez with his icon of St. John the Baptist. 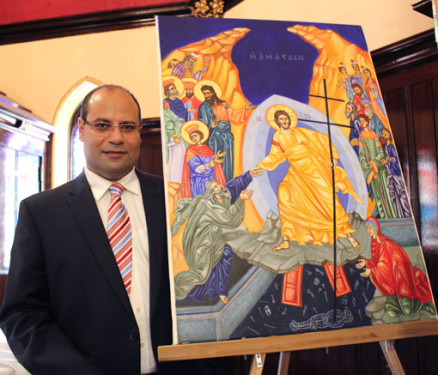 Fayez with his icon of Christ's Resurrection. 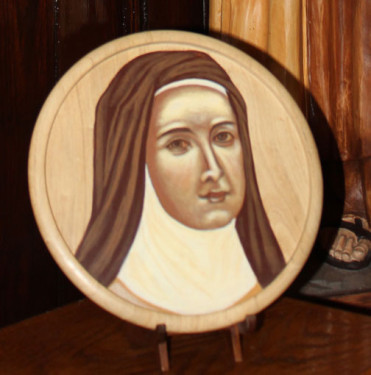 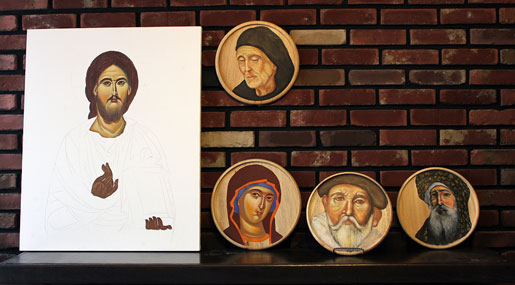 Some of Fayez' wooden portrait-style icons. 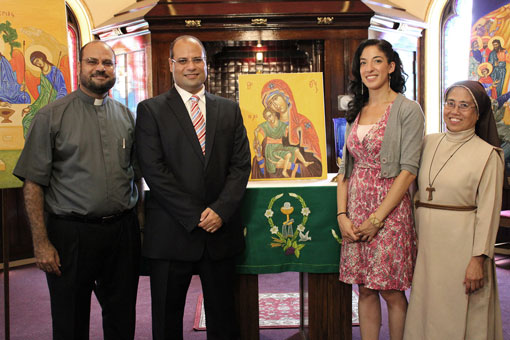 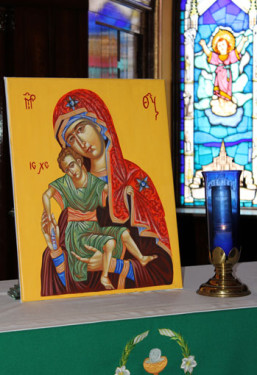 Fayez' icon of the Blessed Mother and Christ Child. 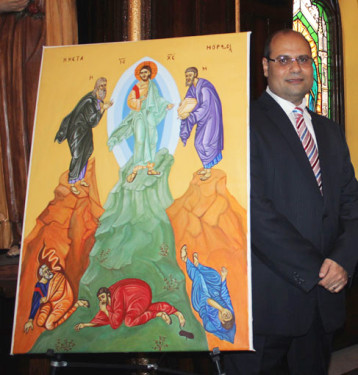 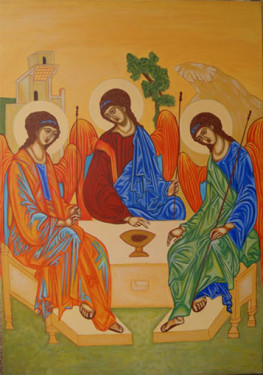 Remaining true to traditional methods, he uses all-natural egg tempera paint – a mixture of finely ground pigments, egg yolk and water – to create “earthy” colors that “portray God’s world as it is,” he said.

Colors are applied over a sketch with the darkest hues first, followed by lighter ones. The progression may seem counterintuitive, but a divine correlation exists.

“It’s like the story of creation,” Fayez explains. “Everything started from nothing, darkness, and slowly built up and then the light emerges.”

Much in the same way, the early Church had no means to teach about Jesus Christ and the Good News except through simple symbols, such as a fish, grapes or a dove, drawn on the walls of catacombs, where Christians hid to avoid Roman persecution.

Fayez said that they gradually built up “a sort of language known to followers and believers.” Over time, those “symbols developed to be clearer pictures of what they’re trying to depict. So rather than the fish, the actual image of Jesus is created.”

Other symbolism is present in the artist’s use of shapes, colors and lines – all of which aim to provide the viewer with “a window to see God.”

“If the symbolism is understood in the icons,” Fayez said, “it can draw the worshipper to prayer and open a dialogue between our Lord and the worshipper.”

Fayez said that he feels he has entered into a deeper dialogue with God through this ministry, and hopes his works draw others to prayer.

“This is my way of spreading the Word,” he said. “John the Baptist said, ‘As I decrease, Our Lord increases.’ The same goes with the art of iconography. As the image comes to life, the artist takes a step back and the image is what speaks.”

Father Fayez is extremely proud of his brother. “He has a mission,” he said. “I love that he can translate the gospel for people with pictures.”

When he is not writing icons, Fayez works as a cinematographer, film director and editor for television and movies in his native Egypt.

While Fayez’s canvas pieces largely portray major figures from the Scriptures, some of his small icons on wood feature more modern figures in the faith, including Saints Therese of Lisieux, Vincent de Paul and John Bosco.

“One of the qualities of iconography is that it can move through time; it’s not just stationary and stable,” he said. “It always speaks to the people, regardless of what time period it is.”

Fayez hopes that his work will also speak to the people of Brooklyn when it goes on display next Wednesday. Visitors are welcome to stop by St. Thomas Aquinas’ chapel throughout the day.