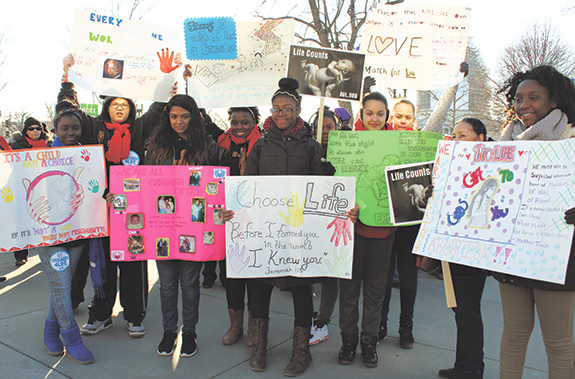 The youth of the Diocese of Brooklyn were well represented at the March for Life 2015 in Washington, D.C. Teens from throughout Brooklyn and Queens boarded buses at the crack of dawn to show the nation that they love all of life, including God’s children who live in the womb of their mothers. Above, the Our Lady of Guadalupe Youth Group from St. Gerard Majella, Hollis, hold up their handmade signs in the country’s capital. Most of these young people are either confirmation candidates or are preparing to go to World Youth Day 2016 in Poland.

Below, students from Christ the King R.H.S., Middle Village, are energized as they meet at their school to embark on a five-hour bus ride for a day pilgrimage to Washington, D.C. The joined the annual protest march that marks the anniversary of the U.S. Supreme Court’s 1973 decision establishing abortion rights in the landmark case of Roe v. Wade.