CROWN HEIGHTS — Yes, the Sangster-Jack family are organ donors. And thanks to them, St. Gregory the Great’s pipe dreams have come true.

The family donated $130,000 to purchase new organ pipes for the Crown Heights parish, a gift made in the memory of Rona Sangster Jack, who died last year. Jack was a secretary at the parish and its school for over 50 years, and one of her sons, Gregory Jack, is a longtime organist at St. Gregory the Great.

On Oct. 6, Father Frank Black, the pastor, blessed the new pipes at a Mass, and the parish honored Jack, the organist, for his 40 years of playing the instrument at the church.

Jack’s family thought that buying the pipes — which produce a fuller sound —would be a “fitting tribute” to their mom.

“She was always extremely supportive of the arts and of my work in the music ministry, and she would go with me to concerts on occasion,” Jack said.

“When Rona was alive, she spent her life trying to serve the Catholic Church,” Father Black said in his homily.

“This family who loves God so much allows us to be able to spend time praying more intently, and the music that inspires our worship is even more powerful because of the dedication and the gift of these beautiful new pipes,” he said. “Their gift enables others to worship and live their faith for generations to come.”

Jack grew up in Crown Heights and East Flatbush. He was named after the parish’s namesake. When he was 6, he started taking piano lessons. One of his first teachers was a longtime organist at a local Baptist church, where he was introduced to organ worship music.

When Jack was 17 and a senior at Xaverian H.S., Bay Ridge, he was asked to fill in as a temporary organist for Sunday Masses at St. Gregory the Great.

“Forty years later, it was definitely not a temporary gig,” Jack laughed.

Those years of service were recognized publicly with the Oct. 6 Mass. Jack’s aunt, Janet Paul, who attended the Mass, said she was “moved to tears” by the music. 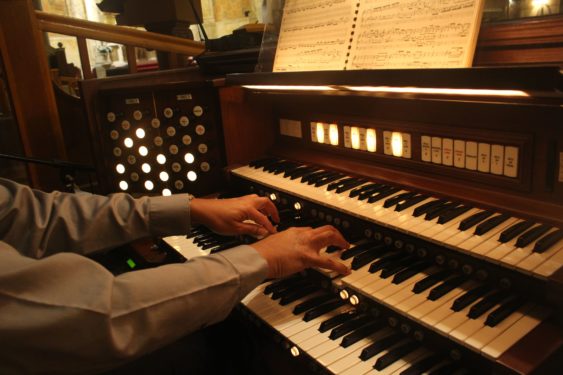 “My prayer is one of thanks to God for making the experience so wonderful and making His presence known through the glorious voices of the choir and the instruments of piano and organ,” Paul said. “It made me feel uplifted and ready to spread the joy I felt with everyone I would come in contact with for the rest of the day.”

Jack — who graduated from Princeton University with a degree in civil engineering and now works as a senior project manager for the Long Island Rail Road — said he views his role as an organist as a ministry and prefers the title of “pastoral musician.”

“The reason is because it’s not music for music’s sake, it’s music in service of worship,” he said.

“I take it very seriously that when I’m here on weekend Masses, I am here to help the whole community to come together in worship.

“It’s not about myself — I don’t do anything with an expectation of something coming back to me. It is for the benefit of the community in our prayers and worship of God. To me, this church is my whole family.”