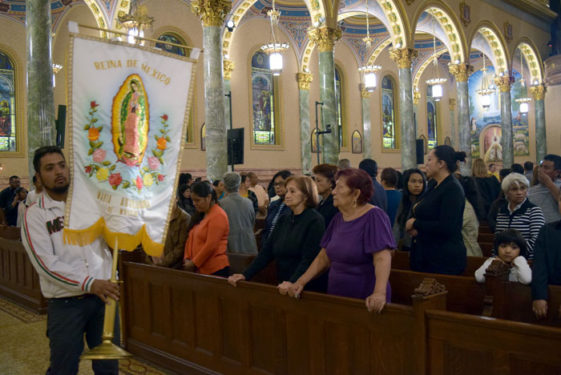 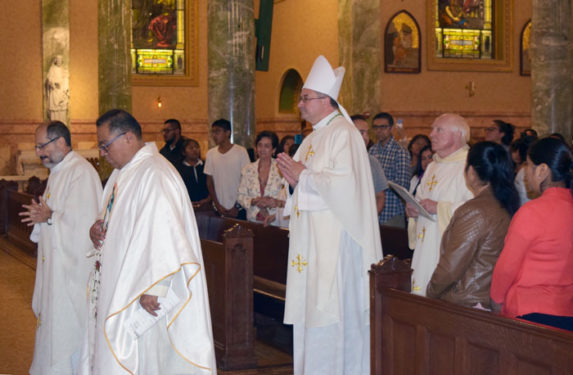 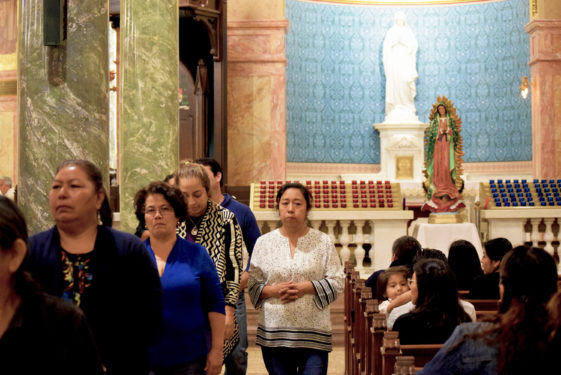 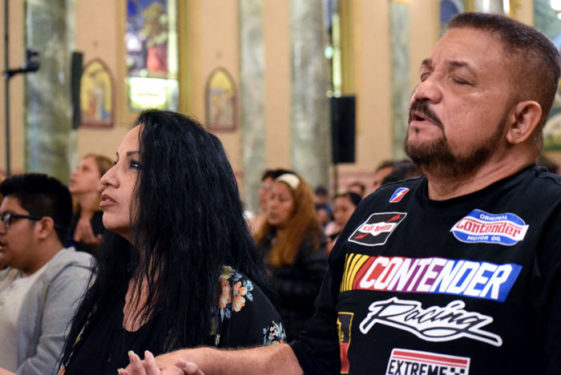 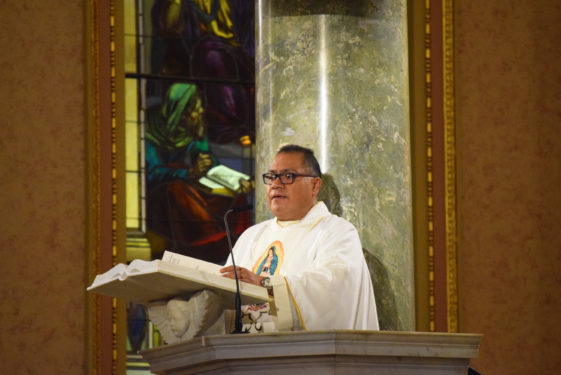 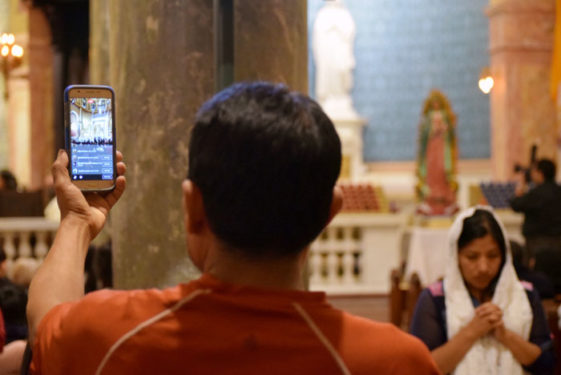 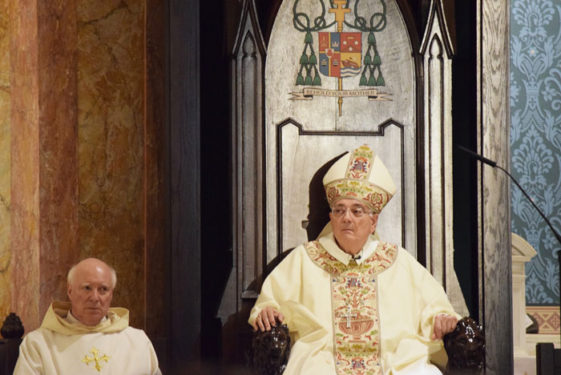 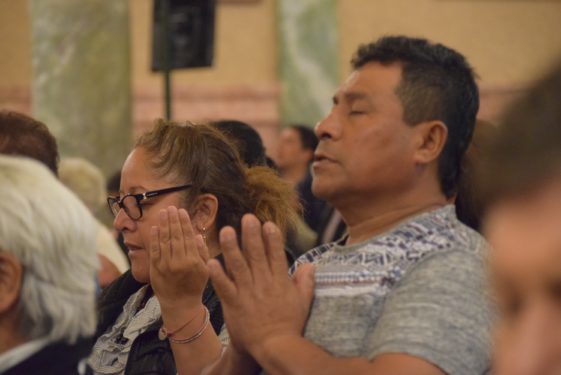 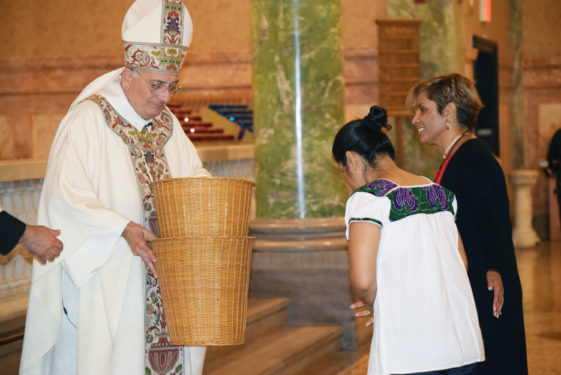 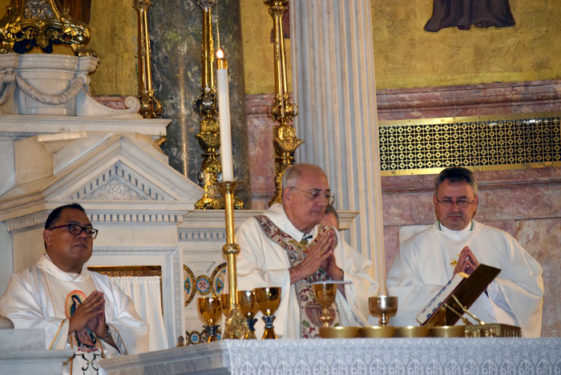 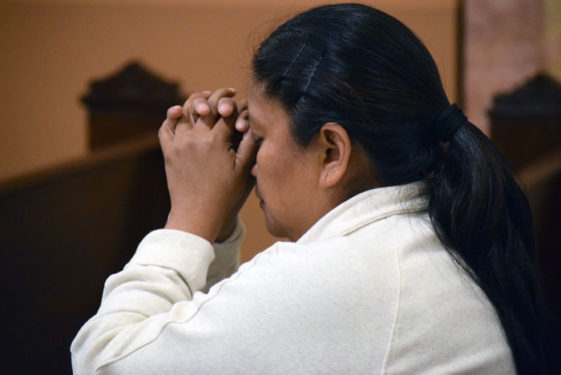 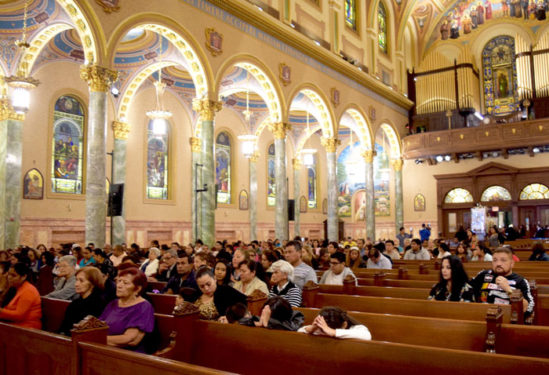 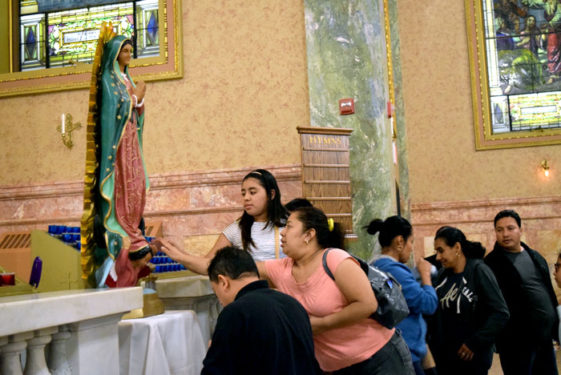 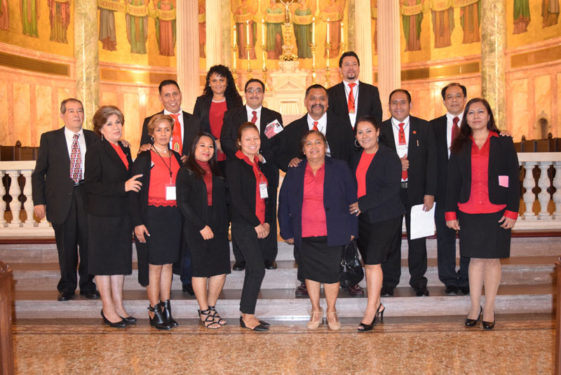 During a Friday evening Spanish Mass dedicated to praying for those affected by two major earthquakes in Mexico, Bishop Nicholas DiMarzio recalled an ancient paradox that juxtaposed the source of evil, natural religion and natural disasters.

But Bishop DiMarzio’s choice to ask a rhetorical question based on what a pagan philosopher penned before Christ was born answered itself by the bishop’s closing statement: “We recognize that the only answer to the problem of evil is to look at the cross of Jesus. Only by His suffering did He redeem us. Only by our suffering, joined to Christ’s suffering, can we understand natural evil.”

With a death toll of more than 360 lives lost and many more still missing from the earthquakes in the southern Mexican states of Oaxaca and Puebla, the Brooklyn Diocese held a Mass of Solidarity and Unity for Mexico Sept. 29 at the Co-Cathedral of St. Joseph, Prospect Heights.

Attending were prayer groups from St. John the Evangelist, St. Rocco, Sunset Park; St. Patrick’s, Long Island City and Blessed Sacrament, Jackson Heights, amongst others. More than 20 priests joined Bishop DiMarzio at the altar as members from the Latin-American community came together to pray.

“Pray, pray and then pray more and keep on praying,” said Lillian Rivera-Andujar, who attends St. Catharine of Alexandria, Borough Park, “because that’s what keeps us going. You know there’s nothing in this world without Him. God is one and only. We are one family gathered in one because we are all God’s children.”

Even though Andujar is originally from Puerto Rico, she attended the Mass with her husband to show solidarity with the entire community that has been affected, including her own family.

“You know we have a lot of neighbors in the neighborhood from Puebla and Oaxaca,” she added. “It’s very sad. Puerto Rico is like that too, my sister is over there. They seem to be ok, regardless of the situation, it’s very hard. No water, no food, no electricity, but we keep them in prayer.”

Mexico took the brunt of earthquakes that at one point reached an intensity of 8.1 seismic waves – which on average, occurs only once a year on Earth, according to data from the U.S. Geological Survey.

While central Mexico is not foreign to earthquakes, such as the recent 4.3 magnitude on Oct. 2, it was the timing of two strong quakes occurring at close proximity tied with the area’s predominantly vulnerable building types that shook it to its core. On Sept. 7, Oaxaca experienced the 8.1 quake and two weeks later, north of the state, the seismic waves traveled into and throughout Puebla with magnitude 6.1.

“One of my brothers was actually working when it happened so it was devastating not getting a hold of him for hours,” said Edith Areizaga, a representative from the Mexican Ministry and parishioner at St. Brendan in Midwood. “Finally he walked into the house and that was when I was finally relieved, he’s ok. He only suffered injury to his knees, but he’s fine, everything else is just materials. He had to walk back home, but transportation was shut off. It took three hours for him to get home.”

Areizaga relied on the power of social media to communicate with her siblings in Mexico City since phone lines were inoperable. She said her heart was torn when watching all the devastation on TV, but the fact that people came together in the middle of such a tragedy helped ease her mind.

“I feel like this is our version of coming together in unity with our beloved people in our native country,” she added.

“We’re at a time when we need to evangelize,” said Father Jorge Ortiz-Garay, director of the diocese’s Mexican Ministry and administrator at St. Brigid parish, Bushwick, “evangelize here our Diocese so we can help and we can show this love and solidarity and unity”

Father Ortiz-Garay highlighted the importance of faith during his homily which coincidentally took place on the feast of the archangels. He asked the congregants to call upon Raphael and Gabriel and invite God into their hearts. Allowing God into their hearts would allow them to spiritually embrace their brothers and sisters around the world who are in need of the power of a unified community. He also asked for the intercession of the patroness of Mexico – Our Lady of Guadalupe.

After Mass, families gathered around the statue of Our Lady of Guadalupe, placed in the front of the church.

For Laura Ramirez, a parishioner at Blessed Sacrament, Jackson Heights, just being able to pray in a church itself was a blessing because she knows how the devastation has affected where 89 percent of her family is from in Mexico.

“They don’t have a place to worship,” said Ramirez. “The church got damaged and for the safety of the people, it’s going to be closed for a full year.”

“Something that we know and something that identifies us as Mexicans especially as people from Puebla is that we don’t look to see if you’re our cousin or neighbor, we come together,” she said. “We can’t be there physically but I know God will give them the strength and wisdom to understand the circumstances. Mexicans are relying on the brotherhood of others.”