With the help of music, prayer and soup, members of the Haitian community celebrated their independence day, Jan. 1, at St. Jerome Church in East Flatbush.

Father Saint Charles Borno, who coordinates ministry to Haitians and Haitian-Americans in the Brooklyn Diocese, explained, “It is important for the people because it’s a way to show their nationalistic way of expressing Haiti as part of our lives even if we are living in other places, but we still love the country and we want to share that moment with other Haitians and anybody else who can come.”

The annual Independence Day Mass, which is held at a different location every year, celebrates an uprising in Haiti that helped the country to gain independence from France 215 years ago.

Bishop Nicholas DiMarzio celebrated the Mass, and retired Auxiliary Bishop Guy Sansaricq, who was born in Haiti, was among the concelebrants. Many Haitian-born Catholics were in attendance. The homily was delivered by Deacon Jean Rameau of Holy Family parish, Canarsie.

The Mass was celebrated in French Creole and French, and the standing-room-only congregation sang the “Te Deum” in Latin.

“At the end of the Mass they [the Haitian people] sing the ‘Te Deum’ which is very beautiful in Latin, which they know by heart, so they have a lot of deep religious tradition in Haiti that they bring with them to our diocese,” Bishop DiMarzio said. 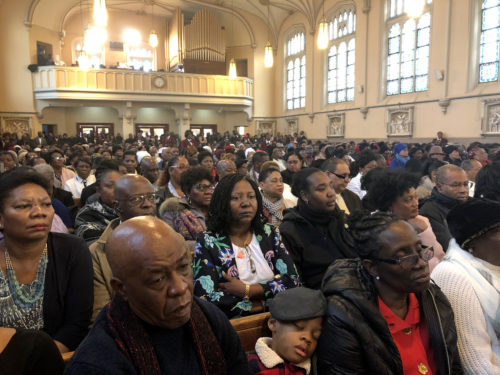 Following Mass, congregants shared soup joumou, a savory pumpkin soup that symbolized the time when slaves were required to make this special dish for their masters, but not allowed to eat it themselves. It wasn’t until slaves gained their freedom that eating the soup was allowed.

“The first thing that the slaves did now that they are free, they want to enjoy that same food that the masters would not allow them to have,” Father Borno said.

More than 200 years later, Haitians continue to consume pumpkin soup on Haiti’s Independence Day as a way to recognize and celebrate their freedom.