These four words embody the ideals of the LOVE, HALLIE Foundation, a nonprofit organization which empowers young people to get involved in causes they care about. The foundation is inspired by the life of Hallie Geier.

Though Hallie passed away at the age of 11, she accomplished so much in her short life. She left behind more than 1000 writings detailing her positivity and hopes, as well as her love for animals and people. She volunteered at soup kitchens and senior centers.

For the past two years, I had the honor of serving on LOVE, HALLIE’s Advisory Board and as the Chair of the youth action division, Hallie’s Angels.

By working with this organization, my eyes have opened to the importance of collaboration, and particularly, to the impact my peers and I can make when we are given support, tools and resources.

I can name many reasons why growing up in Sunnyside, Queens was a gift in my life. When I was seven years old, I started theatre classes with a nonprofit theatre company called Unity Stage. It was there where I met the Geier family. M.J. Geier was one of my directors at the time. A few years later, she introduced me to Ticking Clock Productions, her film company which promotes social action. From putting in countless hours of work for a show to creating content with the purpose of social good, love stands at the core of everything Unity Stage and Ticking Clock do.

Even though Hallie lived in Sunnyside, she even saved $398 of her lunch money to help kids across the world in sub-Saharan Africa. In Hallie’s writings, she discusses the importance of peacemaking and taking action. She writes about people being nice to one another and doing something special.

When I was 15 years old, I was asked to re-spark Hallie’s Angels. M.J. ran the youth division when she was 15 and I learned much from her and two other mentors, Joey and Cohlie, about their experience in Hallie’s Angels when they were my age. Though I knew it would be challenging at times, M.J., Joey, and Cohlie, among many others, inspired me to accept the challenge and embrace beginnings in my new role.

During the time when Hallie’s Angels first took off, I began serving as the youngest member of LOVE, HALLIE’s Advisory Board. I was very nervous when I walked into the first meeting, surrounded by adults who were individually highly successful in their fields. Yet, once the meeting began, I was shocked by how welcoming everyone was. It was here that I saw empathy at work.

Since that initial day, I have always been treated as an equal, despite the age difference. My opinion matters just as much as the opinions of those older than me. Serving on the Advisory Board has provided me with a model of what a working atmosphere should be like-an atmosphere that fosters taking risks and making mistakes along the way. I knew that this was the type of atmosphere I wanted Hallie’s Angels to strive to be like. 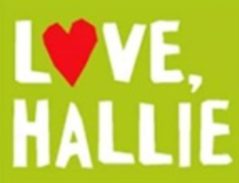 Taking action is a quintessential aspect of Hallie’s Angels. We are continually growing and in the past two years alone, we have partnered with incredible organizations and met passionate peers at action events along the way.

Some of these events include making sandwiches for people without homes with the Girl Scouts and participating in the Kids Kindness March in New York City. We are currently working on a book drive to benefit those who do not have equal access to education. As of early April, we have collected close to 1,500 books!

If I could take away one thing from working with LOVE, HALLIE Foundation, it would be this: Young people truly have the capacity to get meaningfully involved in any cause they choose if they are provided the tools and resources to do so.

Martin is a parishioner at St. Sebastian, Woodside.