MANHATTAN — Tucked away on West 23rd Street in Manhattan is a guesthouse that offers Mass at 7 a.m. and a rosary group at 3 p.m. on most days.

The Leo House is one of several Christian “hotels” in New York City. Michael Coneys, its president, said the guesthouse gets about 40,000 customers a year from tourists to business travelers to those visiting sick friends or family.

The guesthouse harkens back to medieval Europe, where church buildings were among the safest places to stay for travelers, especially for families, Coneys said. He links The Leo House’s ministry to St. Benedict, whose Rule made hospitality a basic function of monastic life.

The Leo House, like many Christian lodgings across New York and the world, accepts all guests regardless of their religion or lack thereof.

Coneys said the guesthouse has “all the amenities of the Roman Catholic Church,” at the time he spoke of following the example of the Good Samaritan.

“The Good Samaritan didn’t care about whether the man he was treating was his own kind,”  Coneys said. “We don’t either.”

The ministries of hospitality are located all around the world, and hundreds of them are in the United States. They offer affordable accommodations at convents, monasteries, sanctuaries, hotels, parish houses, campgrounds and hostels.

The secret is starting to get out. For example, Christian lodges draw 5.6 million tourists in Italy each year, according to the country’s National Institution of Statistics, including almost 60 percent from foreign countries.

One big drawing card: the price. At The Leo House, a standard single room costs $189 per night. That’s similar to prices at other hotels in the Chelsea neighborhood, except that as a not-for-profit organization, The Leo House doesn’t charge a sales tax.

The Leo House also offers steep discounts. Those visiting loved ones in hospitals or nursing homes can stay for $99 per night. Clergy and religious can book a room for $94 per night. And active military, police, fire and EMT personnel receive a 20 percent discount.

On staff, The Leo House has four nuns from the Congregation of Sisters of St. Agnes, the order that has helped run the guesthouse since its founding in 1889. One is Sister Marilyn Ellickson, C.S.A., the manager of fundraising and development.

“The mission of the Leo House is hospitality, and it is carried out because everyone is invited to stay here,” Sister Marilyn said. “We’ve had guests from all over the world, every religion, and people go away happy. They’re glad and they plan to come back.”

Jack and Marcia Kelly, who live on Manhattan’s Upper West Side, are one example of repeat customers to Christian guesthouses.

They have visited hundreds of such inns across the United States, and wrote a guidebook called “Sanctuaries” about the lodgings. The Kellys started a few decades ago when they made a cross-country trip to California to visit one of Jack’s friends.

On that trip, the Kellys stayed at numerous monasteries, abbeys and retreat houses, including Gethsemani Abbey in Kentucky, which is famous for being the monastery where Thomas Merton lived.  Now, the couple seeks seclusion and peace from coast to coast.

“It’s like how some people go to church every week. We revisit some of our favorite places if they’re nearby where we’re going,” Jack Kelly said.

The lodgings offer a place to “just take a break and go somewhere where it’s just you and your prayers or thoughts and figure things out,” he said.

In Manhattan, other Christian lodgings include The Menno House in Gramercy Park, a ministry of the Manhattan Mennonite Fellowship. It has three rooms available and charges per person, at a rate of  $90 per night for one person during peak season and an additional $40 for each person after that. The Evangelical Lutheran Church’s Seafarers International House in Union Square has rooms for as low as $94 per night for one person.

At The Leo House, Coneys said the rates cover the costs of operations and noted that grants from private charities and an annual gala each December help pay the bills.

Emily Drooby of Currents News contributed to this report. 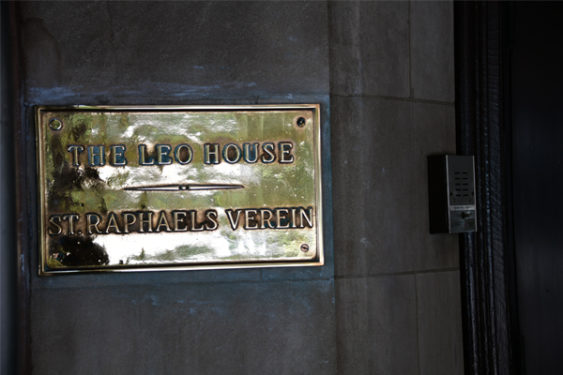 The Leo House has been operating at its location in the Chelsea neighborhood of Manhattan since 1926. It was located at 6 State Street in lower Manhattan from 1889-1926 (Photo: Andrew Pugliese). 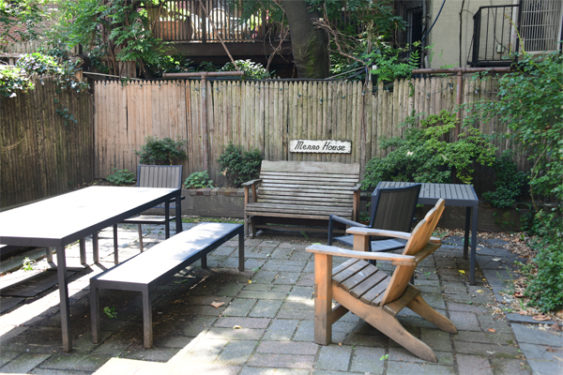 The Menno House, operated by the Manhattan Mennonite Fellowship, opened in Gramercy Park in 1957. It has three guest rooms opened to all travelers (Photo: Andrew Pugliese). 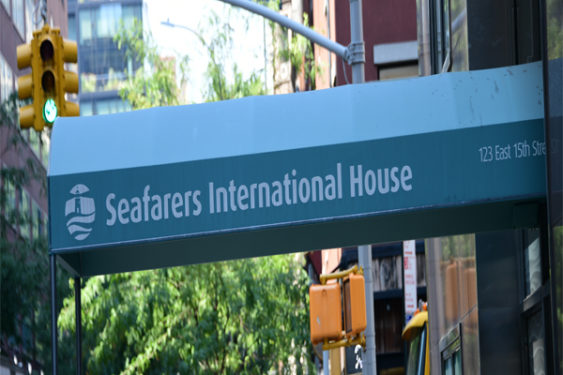 Seafarers International House near Union Square traces its history back to the 19th century. The current guesthouse, a ministry of the Evangelical Lutheran Church, has been open since 1964 (Photo: Andrew Pugliese). 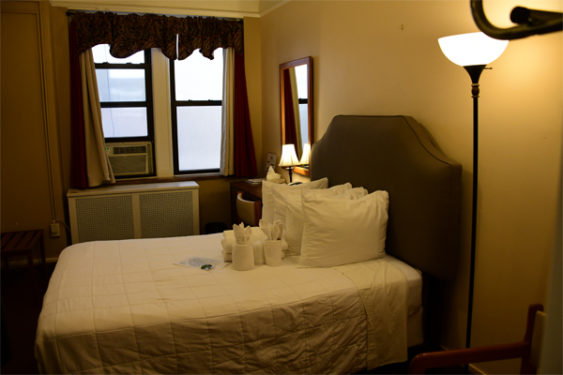 At the Leo House, a standard single room with half bathroom costs $189 per night. The largest suites can accommodate a family of six, and costs $409 (Photo: Andrew Pugliese). 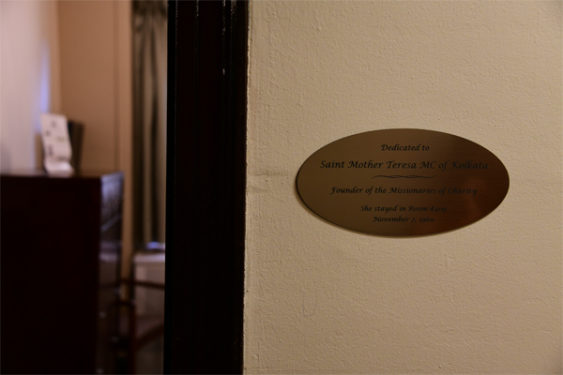 St. Teresa of Calcutta at The Leo House

St. Teresa of Calcutta at The Leo House

In the fall of 1960, Mother Teresa — founder of the Missionaries of Charity — spent a night in Room 409 at The Leo House (Photo: Andrew Pugliese). 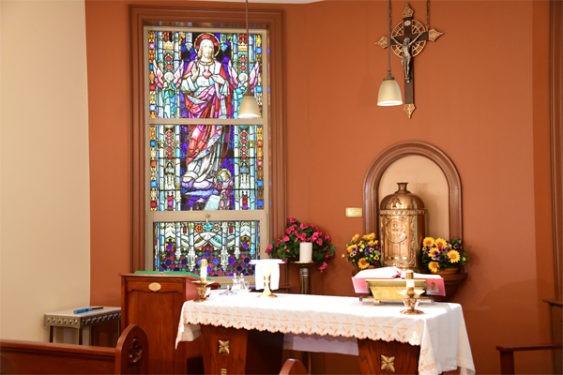 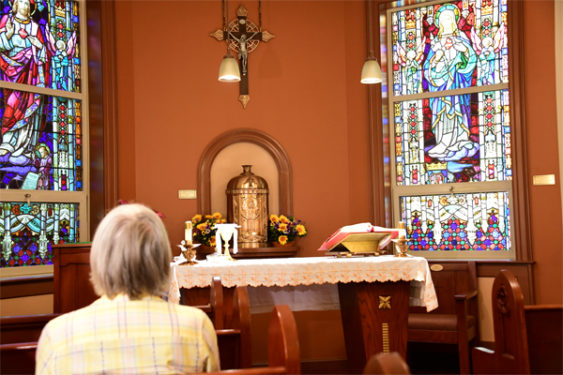 Leo House Development Manager Sister Marilyn Ellickson, C.S.A has been on staff since 2007. She can be found in the chapel each morning mass is offered, as well as at the Rosary group that meets at 3 p.m. (Photo: Andrew Pugliese). 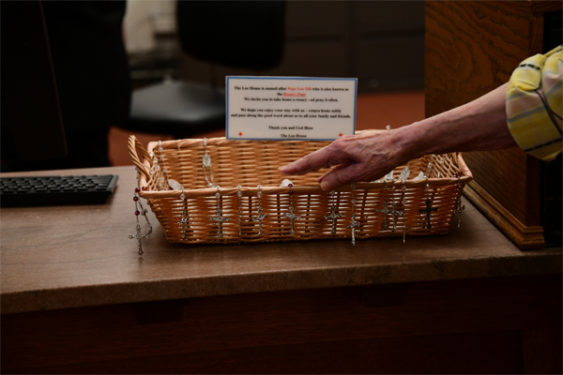 A group meets nearly every afternoon at the Leo House to pray the Rosary. Rosary can be found at the front desk where Michael — the group's leader — works (Photo: Andrew Pugliese). 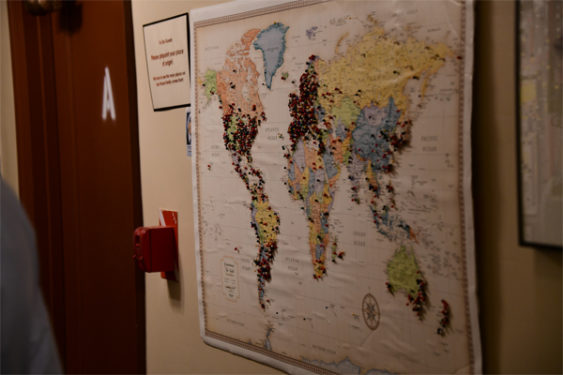 Christian Inn Known Around the World

Christian Inn Known Around the World

A map hangs outside the Leo House dining room and guests are encouraged to mark their hometown with a push pin. The Catholic guesthouse is known on six of seven continents, and even above the Arctic Circle (Photo: Andrew Pugliese).