The cover photo on his Facebook page shows priests lying prostrate on their ordination day, and a brief bio that reads: “I live a vowed life. Ordained 21 May 1994, Roman Catholic Diocese of Brooklyn.”

But Christopher Lee Coleman, 62, is not a priest of the Brooklyn Diocese – or any Roman Catholic diocese. He hasn’t been since 2014.

On Facebook, he actively raises funds for a religious association that looks like a Catholic Benedictine monastery, but this “monastery” is not sanctioned by the Roman Catholic Church and has been known to present itself in a questionable manner.

In recent weeks, Coleman asked followers on social media to join him in a novena for the anniversary of his ordination as a transitional deacon – a misleading request from a man who opted to accept dispensation from the priesthood after a years-old allegation of sexual misconduct with a minor surfaced.

Last month, the Diocese of Brooklyn issued an alert about Coleman when it became aware of his latest postings on social media.

Part of the reason the diocese is concerned, the chancellor explained, is that even though Coleman is no longer a priest, “he presents himself as a priest at times, dressed in a collar, often with black clothing.”

As recently as last fall, he was seen wearing black, meeting with former parishioners and even attending funerals in the Bedford-Stuyvesant community where he used to minister as a diocesan priest, and where he continues to have supporters.

And Coleman’s public Amazon wish list includes a tab-collar clergy shirt – added in October of 2017, more than three years after he left active ministry with the diocese.

Msgr. Hernandez said that Coleman’s social media presence “may lead people – or mislead people – to think that he’s still in ministry. … and we wanted to make sure that people were not mislead by his actions, that they understood he was no longer a priest.”

“Part of the pattern of Christopher Coleman is that he’s very good at deceiving and that’s the information that he’s posted to people that he feels are his supporters, and it’s inaccurate,” Msgr. Hernandez said.

On LinkedIn, Coleman, who has a doctorate in sociology, identifies himself as a “Counselor/Sociologist/Theologian, Parish Priest, 1994 – Present.” He also lists himself as a “Hermit and Counselor” at a place called The Hermitage of Peace.

More details about this “hermitage” can be found on Coleman’s Facebook page, where he claims to manage the organization, which also has its own page describing it as a “ministry of prayer and counseling,” based in Ashford, Conn.

A link to the organization’s website, hermitageofpeace.com, takes people to a site where an unsigned post from Dec. 6, 2018 reads: “On 8 December 1993 I was Ordained a Deacon on the way to the Ordination as a Priest. The second Ordination was 21 May 1994. I have lived my ministry as a Servant-Leader. This is who I am as the Hermit of Peace.

“Please keep me in your thoughts and prayers that I will always remain faithful to my Vows, that I always grow in Sanctity and that I will be Peace and Love!”

In 2017 and 2018, Coleman organized at least seven online fundraisers for Our Lady of Mount Caritas – four on Facebook and three via GoFundMe, and has raised over $4,000 from more than a dozen donors. Two fundraisers are still ongoing. According to Coleman’s fundraising pages, Our Lady of Mount Caritas is “a religious organization,” and the monies are being used for the monastery’s operating expenses and to continue its ministry of prayer and service.

Coleman’s most recent actions did not seem to surprise Msgr. Hernandez, who said that Coleman had been in limited ministry for several years before he was laicized.

“Throughout his public ministry, the Diocese of Brooklyn had to address a number of issues with him that were problematic,” Msgr. Hernandez noted.

According to the chancellor, “Coleman was problematic throughout his priesthood because he manifested a disregard for legitimate ecclesiastical authority, often disobeying his pastors.”

Then in the fall of 2009, the Diocese of Brooklyn received an allegation of sexual misconduct against Coleman through its independent reporting line, 1-888-634-4499.

According to Adriana Rodriguez, diocesan director of communications and press secretary, the caller alleged that Coleman engaged in an inappropriate relationship with him in the late 1980s when he was a minor and Coleman was his public high school teacher.

This was alleged to have happened before Coleman entered the Brooklyn Diocesan seminary.

“The report went to the district attorney’s office and to my knowledge, they did not take up the case,” Msgr. Hernandez told The Tablet.

In October of 2010, after an extensive investigation, the diocesan review board determined the allegation credible and recommended Coleman be removed from active ministry. According to Rodriguez, Coleman’s computer was seized as part of the investigation and investigators found questionable photos of young people who could have been minors. The information was shared with law enforcement authorities.

“Once the review board comes and says the allegation is credible, then he’s placed on administrative leave. He’s not to have an ecclesiastical residence, he’s not to present himself as a priest,” Msgr. Hernandez said.

In January of 2011, Coleman was placed on administrative leave. There was no public record of this until The Tablet ran a story in November of 2017 naming Coleman among 13 priest-abusers who had been laicized.

According to the diocesan alert from last year, “with the release of the Independent Reconciliation and Compensation Program, a new allegation against a minor has surfaced which was also found to be credible.” No further information was available at press time. 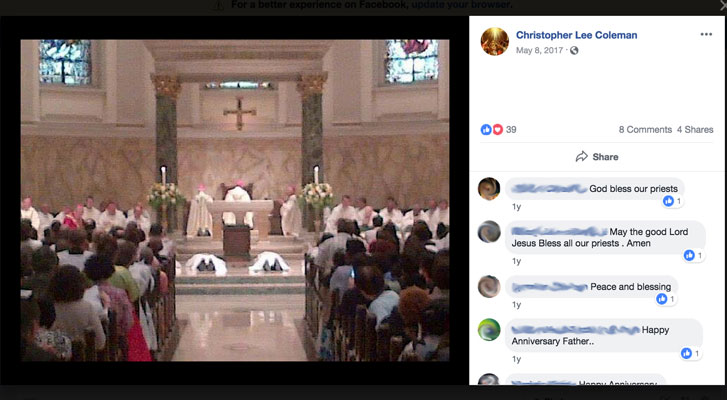 The diocese used the original allegation of sexual misconduct with a minor from 2009 and the images from Coleman’s computer as part of a petition to the Congregation for the Doctrine of the Faith (CDF) – the Vatican office that processes cases involving allegations of sexual abuse toward minors – for Coleman’s dismissal from the clerical state.

“We asked him to seek laicization voluntarily. At first, he refused,” Msgr. Hernandez said. “He got a canon lawyer who represented him.

“When he was informed that he would go through a canonical process, he chose not to follow through the process and basically, asked for the favor of being dispensed from the clerical state.”

To clarify, dispensed means that the person has asked to leave the priesthood and was granted his request, whereas dismissal is a penalty that has been imposed upon the person.

After some back and forth with Coleman, the diocese submitted the petition to the CDF in 2012 and the Vatican responded by dispensing Coleman in 2013. Coleman finalized the decision by signing and dating the decree of dispensation on March 6, 2014. “By signing this, [Coleman] acknowledged the laicization process,” Msgr. Hernandez noted.

At the same time, his office was also working to investigate and respond to public allegations against other priests.

When contacted in regard to this story, Coleman declined to be interviewed. In his response, he still identified himself as a priest: “Thank you for your offer but I will let my Lord and my Lady take care of all of these things. I will stay in prayer. Peace and love, Fr. Chris.”

The Tablet reached out to several people who have contributed to Coleman’s fundraising campaigns and posted comments on his Facebook page, but no one wished to be interviewed.

While Coleman’s current actions are not believed to be illegal under local or canon law, the Brooklyn Diocese wants to protect the faithful and ensure that they understand who and what Coleman is – and is not.

“I think he is misleading people to believe he is a priest in active ministry,” Msgr. Hernandez said.

The diocese is aware that he has made overtures to churches that are outside of the Catholic communion. Our Lady of Mount Caritas, with which he has been linked, is part of the North American Old Roman Catholic Archdiocese of New York-Pennsylvania, which is not in communion with the Roman Catholic Church.

“What he’s doing now is inconsistent with his decision to seek a dispensation from the clerical state,” Msgr. Hernandez said. However, he said that if Coleman “chooses to leave the Catholic faith and become Protestant, we have nothing to say about that.”

While the diocese says it does not monitor former priests who have been laicized, the chancellor’s office affirmed that it does take action if it “becomes aware of a situation that could become problematic,” such as a priest who has been laicized but potentially misrepresents himself as a Catholic priest in good standing.

3 thoughts on “Laicized B’klyn Priest Still Cause for Concern”