CORONA — How many times would an organist have to play the traditional “Bridal Chorus” ballad during the beginning of a wedding?

For those in attendance for the ceremony outside Our Lady of Sorrows Church in Corona, Queens, on July 17, the answer was unequivocally simple: as many times it takes to let nearly 30 brides walk down the church aisle.

Wrapped around the sidewalk in a single-file, socially distant line around 11 a.m., brides of all ages stood next to their sponsors, ring bearers, and flower girls awaiting their turn to go inside the church. Any sign of emotion on the brides was masked by the summer sunlight that sparkled off their white, laced gowns, crystal crowns, and marshmallow-colored bouquets.

After hours of church organs playing inside and cars honking outside, the seriousness of the liturgical celebration was about to begin: the moment when months of marriage preparation would be solidified at the altar through the sacrament of holy matrimony.

A total of 28 brides walked down the aisle to meet their grooms waiting at the altar. Each time that occurred, the altar servers would ring a bell to symbolize the importance of their unity. One by one, vows and intentions were repeated in Spanish as the bride and groom verbally declared their intention to love and respect one another.

Father Rodriguez’s homily summarized the significance of their public declaration. He reminded the couples, about the importance of their relationship with God, of the value of the sanctity of marriage, and how each of their sacrifices for one another and their families was a reflection of how Christ made the perfect and ultimate sacrifice by giving his life to his bride, the Church.

By the time the clock struck 3 p.m., every couple became officially “joined together” in the eyes of the Church. The traditional ceremony continued with the Eucharistic celebration, and by 6 p.m. it was time for the newly-married to be on full display once more. Couples lined up outside for a street procession, not only as an opportunity for them to witness their faith but for the community-at-large to see it too.

As for Hugo Morales Melquiades and Socorro Feliciana Olmedo, they were like many couples that day, renewing their vows, having already been together for quite some time and raising families.

During their 22-year relationship, the two had their eldest son Joel during their first year, and then later came his two teen siblings Edith, 13, and Elizabeth, 11.

Bride Socorro expressed how happy and emotional she was.

“It’s a dream come true that after 22 years, we’re able to be united together,” she said.

“Thanks to God we were able to be happy and together for that long,” he said.

But it was their eldest son who shared the newfound deeper meaning of his parent’s relationship.

“Now they’re connected not only in a physical level but now more on an emotional and spiritual level,” Joel said, “in a way that even when they die, or something bad happens, they’ll be together in the afterlife.”

As the evening drew near and the big reception took place in the church’s backyard, it would be amiss to not mention a group of unsung heroes who worked in the background to make the holy sacrament possible for the couples.

The “Pastoral Familiar,” or the Family Ministry Team, were the organizers of the event, composed of 12 married couples who shared their time and talents with the couples-in-formation, helping them prepare for the sacrament through monthly discussions, sessions, and even homework.

Pablo Cisneros serves in the ministry. When it comes to talking to the couples about real-life topics like natural family planning, contraception, and the importance of communication, he said that “there’s never enough time” to talk about everything.

“I feel blessed when someone comes up to me saying ‘thank you,’ because I say it’s all God working through me.”

Cisneros spoke about the ministry’s work with a sense of passion and undeniable purpose. When he sees the fruits of his labor during big events such as the Mass Weddings, he can’t help but see his wife happy and smiling down at him.

Pablo and Maria served together at the parish for years, until she passed in 2015. Next month would have marked 22 years of marital bliss. Pablo says he does it all in loving memory of Maria — a true testimony of their vows of “till death do us part.”

“I can’t stop,” he said. “I know she is happy in heaven. She gives me the motivation to continue.” 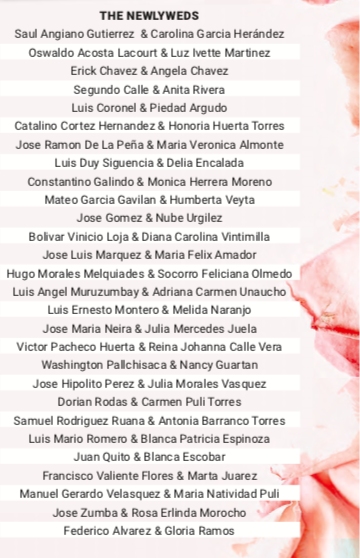