On the second anniversary of the earthquake that devastated Haiti, hundreds of Haitian faithful from throughout the diocese gathered in Holy Family parish, Canarsie, for a commemorative Mass celebrated by Father Gerard Dumont.

Though the occasion was a somber one, the church was filled with songs of praise to God.

During his homily, Father Jean Moise Delva, director of the diocesan Haitian apostolate, reminded the congregation that Catholics are a people of hope because Jesus destroyed death. Without the assurance of the resurrection, he said, faith would be in vain.

“Death is not the end but a life-changer,” he assured them.

Father Delva told the congregation that Jesus is with them in their suffering and they need to draw on his strength.

“If you still cry for your loved ones, ask the Lord to wipe away the tears from your eyes,” he said.

Marie Decolline, parishioner of St. Catherine of Genoa, Flatbush, attended the Mass with a heavy heart remembering the friends she lost in the earthquake.

She said it is depressing that two years later people are still suffering in her native land. However, she shares Father Delva’s commitment to hope.

“God is good and one day hopefully everything will be ok,” she said.

Councilmember Mathieu Eugene, the first Haitian to be elected to the New York City Council, told the congregation that Haiti continues be in need of their prayer because God can help bring relief to the nation.

“It’s two years after the earthquake and people are living in tents and are in need of basic necessities of food, shelter and medicine,” he said.  “And we have to come together to help.”

“It is an honor to be back here,” he addressed the pastor. “I would like to thank you for your unwavering commitment to the Haitian community.”

Father Amann has supported parish ministry to the unique needs of a community of people united by tragedy. He said he was pleased to be host to people who look to God to help them through their suffering.

Holy Family parish has welcomed many Haitians over the past two years. Parish sacristan Hughes Rabel said attendance for Haitian Masses are about double of what they were before the earthquake and there are many Masses said for the intentions of the suffering and the dead.

Father Delva said an increase in Mass attendance in the Haitian community can be seen throughout the diocese because the Haitian Catholic community has put their trust in God.

“You can see their acceptance and renewal of faith,” he said. “They know He is still with them through their tragedy.”

Father Souvenir Jean Paul, S.M., chaplain of Kings County Hospital and a Haitian native, said it is important for him to feel the camaraderie of the Haitian community.

“It’s an occasion to be together and continue to pray for those who lost their lives and those who are still living,” he said.

Marie Joseph, a parishioner of Holy Family, said she came to be in spiritual unity with all the Haitians who died during the earthquake.

“A lot of Haitians lost their lives,” she said. “This is a very important time to remember them.”

Father Jean Paul said his family in Haiti is still trying to save enough money to rebuild their home, which was destroyed in the earthquake. Whenever he sees his Haitian brothers and sisters cry in suffering, he said, his heart breaks.

“My prayer to God is to spare Haiti from another storm like this. It would be the end for Haiti,” he said.

Father Jean Paul said the greatest challenge to Haiti now is the lack of collaboration between the nation’s leaders. He said he is thankful for Auxiliary

Bishop Guy Sansaricq and the Haitian National Apostolate he leads because they have a potential to be an influential force. However, this is going to be difficult because of the disorganization on the island nation.

Bishop Sansaricq was unable to attend the Eucharistic celebration because he was leading a retreat in Haiti.

Father Jean Paul also expressed thanks to Bishop Nicholas DiMarzio who has been an invaluable help to the Haitian people.

At the end of the Mass, Father Delva declared Bishop DiMarzio an honorary Haitian for all the efforts he led to bring relief to the devastated country. 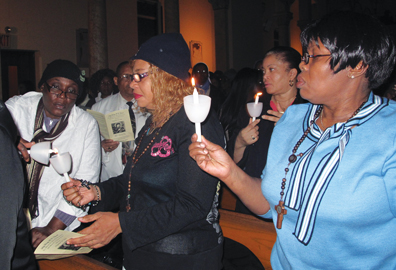 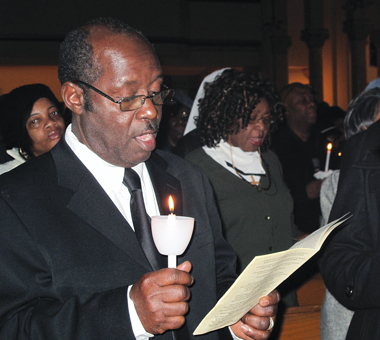