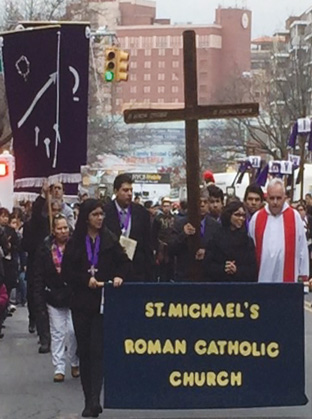 The observance of Good Friday in the streets of downtown Flushing was an awesome sight to see, and it served as a demonstration of faith in today’s world, which is rife with violence, fear, injustice, poverty and economic instability with the survival of humanity at stake.

Participating in the procession, I was reminded of a talk at the 51st Eucharistic Congress in Cebu, Philippines, given by His Eminence Orlando Cardinal Quevedo, O.M.I. DD., on the “Eucharist makes the Church, the Church makes the Eucharist,” under the theme of Seeing-Loving-Living.

I feel the same theme applies for the Good Friday outdoor Stations of the Cross at St. Michael Church in Flushing. For many years, the parish has been re-enacting publicly the Passion of our Lord on Good Friday. Volunteers from the different parish ministries prepare for this day.

Father John Vesey, St. Michael’s pastor, is very involved in this event. According to Father Vesey, Pope Francis has been encouraging the universal Church to return to enliven its faith practices through popular devotions. If likened to a fabric, the parish of St. Michael is made up of a tapestry of parishioners, rich in cultures and traditions. 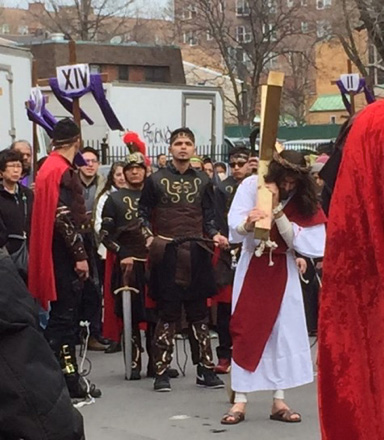 This year, Father Vesey addressed the needs and challenges of families today, and that was reflected for each of the stations.

Prayers were offered in English, Chinese, Spanish and Tagalog, together with the hymns. The route was about a mile and a half, and the threat of darkening clouds did not hinder the pilgrims. Everyone came prepared and if not, they withstood the rain.

Everyone saw the rain as a Good Friday blessing, even Father Vesey who got soaked in the heavy downpour. A kind pilgrim offered him a poncho.

After that heavy downpour, as the group turned from Ash Ave to Parsons Blvd., the sky opened up and the sun shone brightly. As the stations progressed on, humanity was once again reminded of the gift of life received for the sacrifice of a man named Jesus. 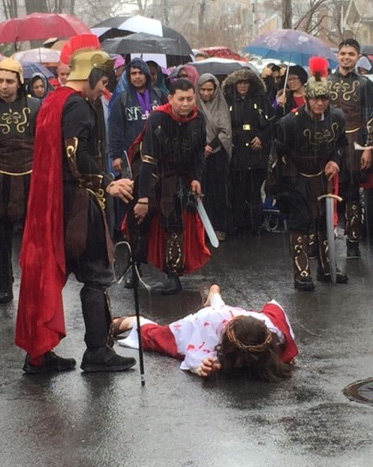 Pilgrims were reminded of the kind of suffering He endured in comparison to the present situation of our lives.

The symbol of the cross during Jesus’ time is a death unexpected of the messiah for whom the Jewish people longed. Even death on a cross is unimaginable for any human being. Would you say this is love?

What is love? There are many definitions of it, but none more powerful than agape love, the kind of love of God for humanity.

As Christians, we can demonstrate filial love, a brotherly and sisterly love toward one another. With the world in crisis, let this love rule among us. This is the power of God living in each one of us.

Christ has already given humanity a gift; the gift of His self-giving death on the Cross. “When hope awakens to the universe of grace, all existence is laid open to the transforming power of the gift disclosed in the Cross of Jesus” (“Eschatology and Hope” by Anthony Kelly).

Figueroa-Lascano is a parishioner at St. Michael Church, Flushing. 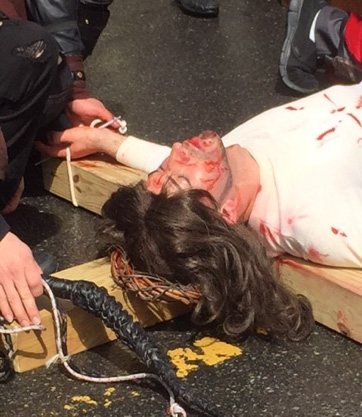 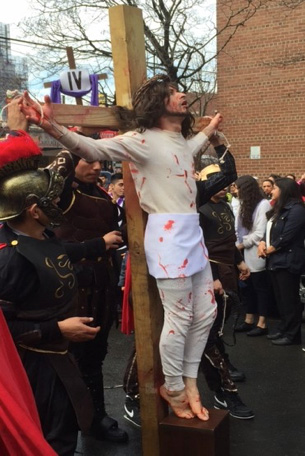