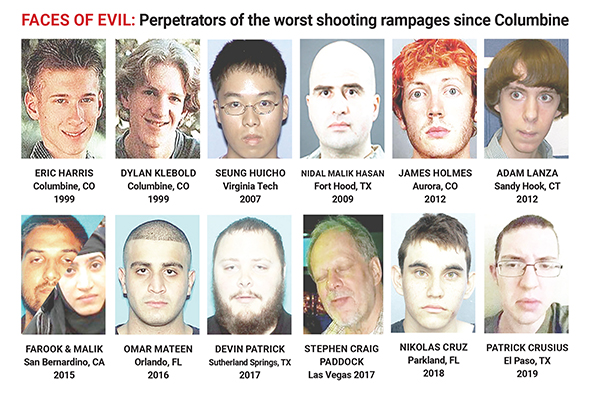 MANHATTAN — In the wake of the back-to-back gun massacres in Texas and Ohio, President Donald Trump insisted, “Mental illness and hatred pull the trigger, not the gun.”

Still, Trump has pledged that when lawmakers return from their August recess, he will support efforts to pass new legislation for background checks for gun buyers in response to mounting pressure to respond to America’s growing gun violence.

Since 1999, when two gunmen entered Columbine H.S. in Colorado and killed 12 students and one teacher, gun massacres in the United States have continually surpassed mass shootings in the rest of the world.

According to a study from Harvard University’s School of Public Health, since 2011, public shootings in the U.S. have tripled in their frequency. More than three-quarters of the guns used in the rampages were acquired legally.

The most recent data from the U.S. Centers for Disease and Control show that in 2017 there were 39,773 gun-related deaths in the country, and according to the American Journal of Medicine, “Americans are 10 times more likely to die as a result of a firearm compared with residents of these other high-income countries.”

Brooks Singer, a former federal investigator and a lecturer in sociology at the Catholic University of America, told The Tablet that the key to understanding that data comes down to one word: “culture.”

Singer noted that the Second Amendment gives Americans the right to bear arms, whereas “in other places it’s not a right, just a privilege.”

“There are other factors — family situations, friends, the schools, videogames, etc. — that must be studied to understand ‘what is the vision of the guns and gun culture’ that they have that contributes to this?’” he said.

Douglas Gentile, a psychology professor at Iowa State University, told Catholic News Service that “violence is multi-causal. We need a multi-causal approach to solving it. To try to blame one thing is silly.”

Gentile said that “Columbine had illness, uninvolved parents, the shooter had access to weapons, he was bullied — that’s a big risk factor — and lots of violent videogames. Was that the thing that did it? It increased the odds, sure, but lots of other things increased the odds.”

Among other contributing causes, one study by the Fuller Youth Institute concluded that “there is now enough evidence to comfortably say that playing first-person shooters [videogames] can be a hindrance to the formation and wellbeing of today’s young people.”

Meanwhile, researchers from the Open Nursing Journal have found an increased link between online cyberbullying and a rise in school violence.

Another study in the Journal of Aggression and Violent Behavior distinguished between “traumatized shooters” who “come from dysfunctional homes and have had exposure to both substance abuse and criminal behaviors,” and “psychotic shooters” who come from “intact families, but may suffer from schizophrenia, conduct disorder, oppositional defiant disorder, or another mental illness,” highlighting that shooters are often shaped by either their home environments or mental health.

In an interview with The Tablet, Therese Lysaught — a professor at the Neiswanger Institute for Bioethics & Health Care Leadership at Loyola University Chicago and author of the book, “Catholic Bioethics and Social Justice” — noted that deaths from gun violence in the United States is roughly equivalent to  deaths from breast cancer.

Such measures are being pushed alongside improved mental health initiatives and “an honest assessment of the toll of violent images and experiences which inundate people, particularly our youth.”

In the wake of the shootings in Dayton, Ohio and El Paso, Texas, Cardinal Daniel DiNardo of the Archdiocese of Galveston-Houston, president of the USCCB, issued in a statement that all relevant USCCB committees should “outline a reinvigorated policy agenda and pastoral campaign to address ways we can help fight this social disease that has infected our nation.”

Looking ahead, Cardinal DiNardo said, “We can never again believe that mass shootings are an isolated exception. They are an epidemic against life that we must, in justice, face. God’s mercy and wisdom compel us to move toward preventative action.”

Sister Mary Gianna Thornby, a survivor of the Columbine massacre who went on to enter religious life following the shooting, recently told Currents News that the ultimate hope for the despair of gun violence can be found only in God’s mercy, and she encouraged other survivors not to lose hope.

“It’s so difficult to see other young people going through what we do,” she said. “Like the two boys who did the shooting at my high school. It’s hard to see people responding out of the anger, and the hatred and the unforgiveness when God offers us a full and abundant life in Him. He can make something so beautiful even out of the great tragedies of our life,” she concluded.