PROSPECT HEIGHTS — Former New York Governor Andrew Cuomo, who resigned in disgrace in August when faced with numerous accusations of sexual harassment, has been criminally charged with forcibly touching a female aide during an alleged incident in the governor’s mansion in Albany in December 2020.

The misdemeanor complaint, filed by the Albany County Sheriff’s Office on Oct. 28, charges Cuomo “intentionally and for no legitimate purpose” forcibly touched the victim.

If found guilty of the misdemeanor charge, Cuomo could face up to a year in prison.

The victim is not named in the complaint but the document matches an allegation made against Cuomo by Brittany Commisso, a 33-year-old former executive assistant who went public with her accusation in August.

Commisso’s attorney, Brian Premo, told the Albany Times Union, in a statement Thursday, that his client “was informed about this recent filing through media.”

He later said that Commisso “has been and will remain a resolute cooperating victim in pursuit of blind justice.”

According to the criminal complaint filed by the sheriff’s office, the evidence against Cuomo includes New York State Police Blackberry PIN messages, cell phone records, and a text message from Cuomo’s cell phone.

Click on the image below to read in full 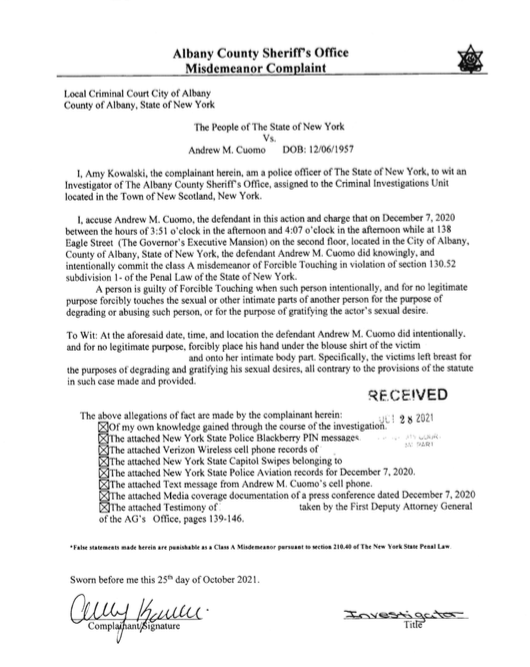 Cuomo’s attorney, Rita Glavin, said in a statement that he “has never assaulted anyone.” She also claimed that the criminal complaint by the sheriff’s office was politically motivated: “This is not professional law enforcement. This is politics.”