On the day when the nation pauses to reflect on the life, witness and ministry of the Rev. Dr. Martin Luther King Jr., Catholics in Brooklyn and Queens gathered to celebrate the Baptist preacher’s life, and keep his dream alive amid the challenges in today’s world.

The diocesan Vicariate of Black Catholic Concerns sponsors the annual praise and prayer service in honor of Dr. King, which was held at Our Lady of Victory Church, Bedford Stuyvesant, Jan. 16. This year, Dr. King would have been 88.

Father Alonzo Q. Cox, diocesan coordinator of ministry to African-American Catholics, and pastor of Our Lady of Victory, a worship site of St. Martin de Porres parish, led the service.

“It is with great joy that we gather here today as we continue to pray for peace, for unity and for equality,” said Father Cox.

Rosanne Barber from St. Gregory the Great parish, Crown Heights, and Barbara Henry from Our Lady of Mercy Church in Brownsville, led the congregation in prayers of praise and trust in the Lord from the Psalms.

The Beatitudes of Jesus, recounted in St. Mark’s Gospel were proclaimed for all to hear by Father Daniel O. Kingsley, parochial vicar.

But the hymn that drew the most attention was the one sung by the event’s guest speaker, transitional Deacon Kareem R. Smith from the New York Archdiocese.

Taking the pulpit, Deacon Smith, who will be ordained for the priesthood in May, began by singing the words, “Steer the Way to Jesus.”

He started his talk by questioning how he, a boy from the Bronx, who was born after Dr. King’s assassination, could speak about “a man who has changed the course of history by his determination to stand up for the truth, what is just.”

Further, the former president of the National Black Catholic Seminarians Association, suggested that he might be too young to understand what his ancestors endured.

“You see, being born in August of 1989, my young eyes never had the opportunity to see the separate drinking fountains for whites and blacks, colored balconies in movie theaters,” he said.

And yet, there is reason to celebrate, he explained, because of courageous men and women like Dr. King who paid the price for the freedoms he and others now enjoy.

“I thought as a very young man that freedom was just that: free. Then I discovered that nothing in life is free. The salvation that I so freely enjoy cost my Savior, Jesus Christ, His life. Standing up for justice cost Dr. King his life.”

To understand the price of freedom in today’s world, he pointed to cost of peace in Afghanistan, the social restrictions on women in Iraq and American soldiers who return from overseas deployments with physical and emotional trauma.

“Dr. King risked his life to combat social injustice and to advance the welfare of others,” he noted. “Although pieces of his dream have become reality, truth be told, the 21st century continues to be a challenging time” in America.

As proof, he offered up the names of Trayvon Martin, Eric Garner, Michael Brown, Tanisha Anderson, Akai Gurley, Tamar Rice and Freddie Gray. He also decried the issues of poverty and inadequate access to education and healthcare.

“The old Negro spiritual says, ‘We shall overcome someday.’ Well, I’m waiting on that someday,” he told the congregation. “Our work is not done.”

“If America is going to continue to move forward, it is going to take the efforts of countless everyday people like you and me,” he added.

“It’s important to keep up the work because we’re not there yet,” she said. “The struggle’s still on.”

She said that she “never knew prejudice” before coming to the U.S. from Haiti, and it was here that she learned what it is to be judged for the color of her skin.

“In this day and time, you would think that prejudice is over, that we’re all one, we’re equal. But that’s not always the case. People still regard you in a certain way and it breaks your heart.

“We preach about Jesus, about love,” she said. “In some places, the love is just not in everyone’s heart.”

Louis said she was grateful to spread some love through song at the prayer service, and hoped the message of the day “would reach the hearts that need it.” 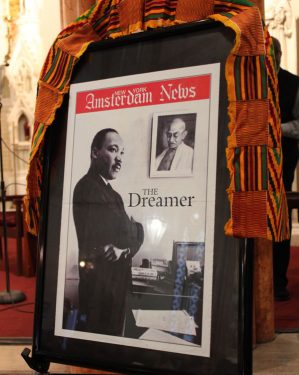 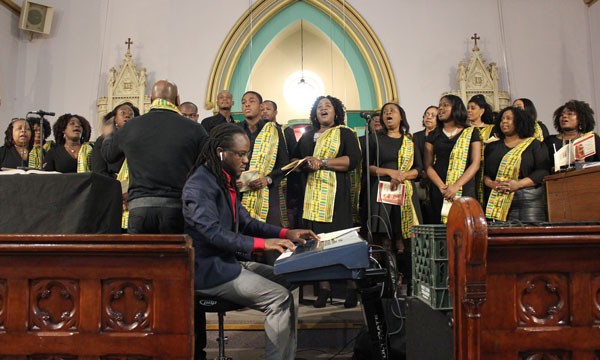 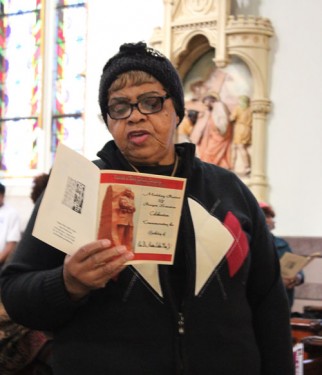 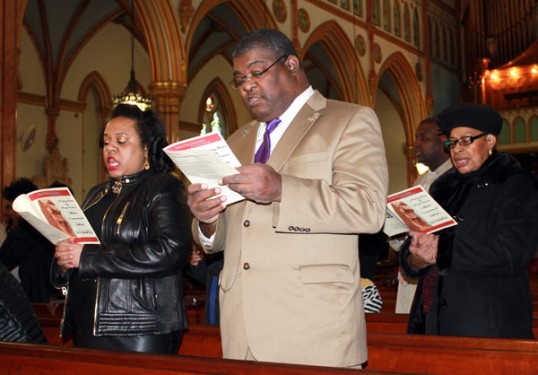 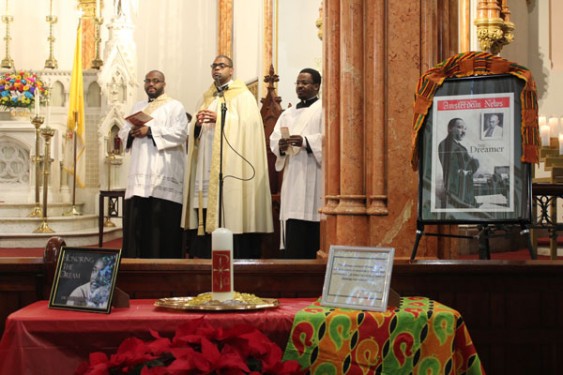 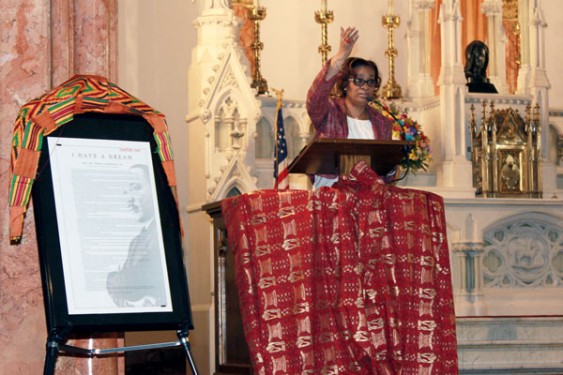 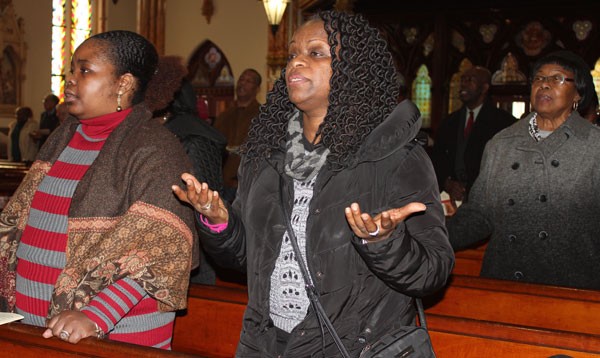 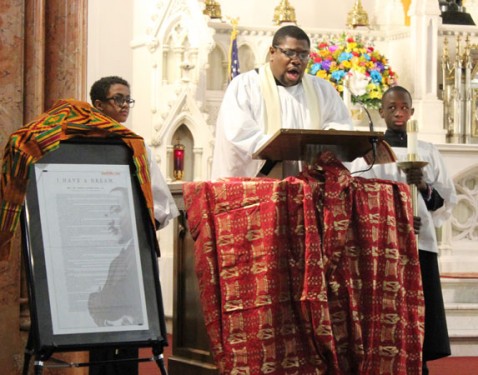 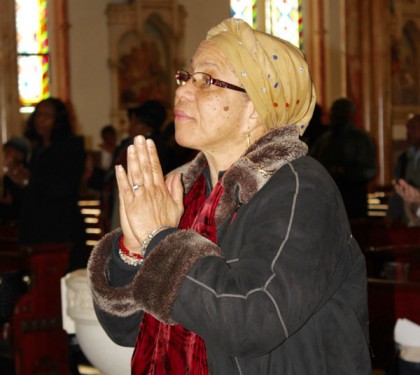 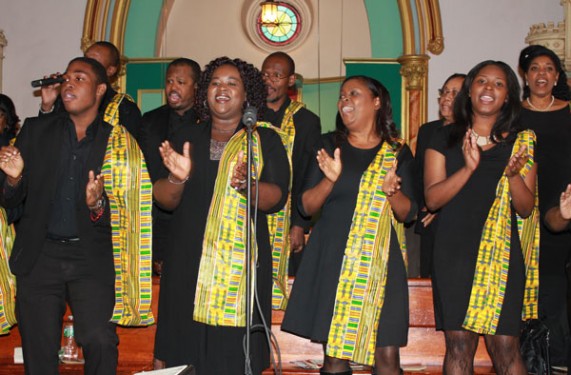 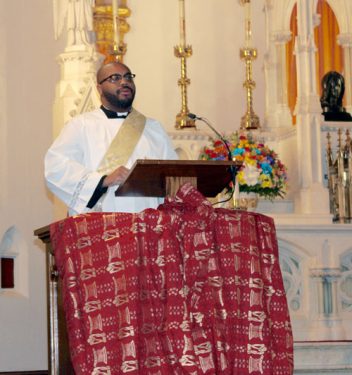 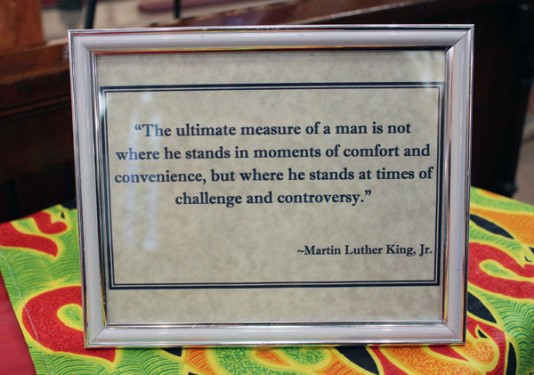