MARINE PARK —  On Oct. 5, Gov. Cuomo announced all New York City schools within nine hotspot ZIP codes will physically close and pivot to remote learning on Oct. 6. This came after New York Mayor Bill de Blasio announced a proposal on Oct. 4 to shut down schools and non-essential businesses within the areas with high positivity rates.

During his press conference on Oct. 5 — a few hours after Gov. Cuomo’s press conference — Mayor de Blasio said the physical closures of schools could last two weeks minimum (with positivity rates under three percent for seven consecutive days) or as many as four weeks (whereby the last day of the four weeks positivity rates are under three percent). 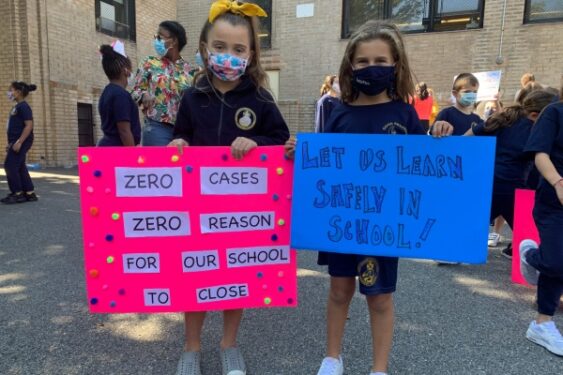 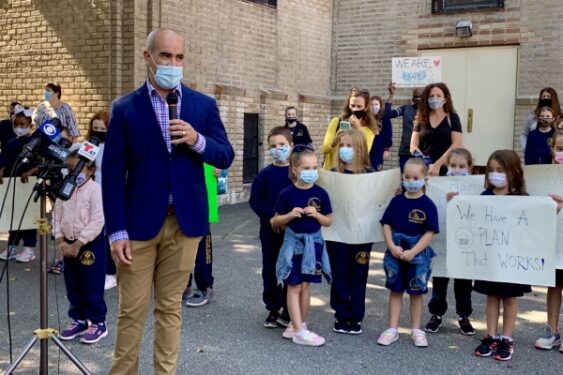 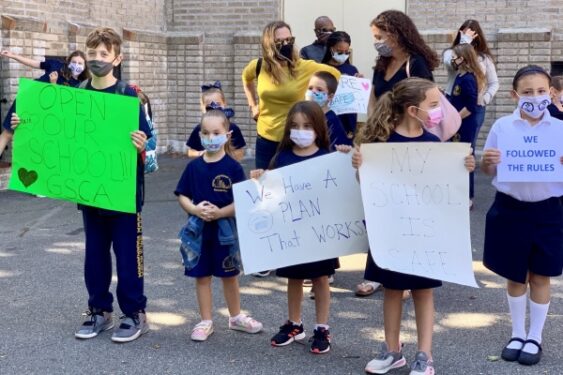 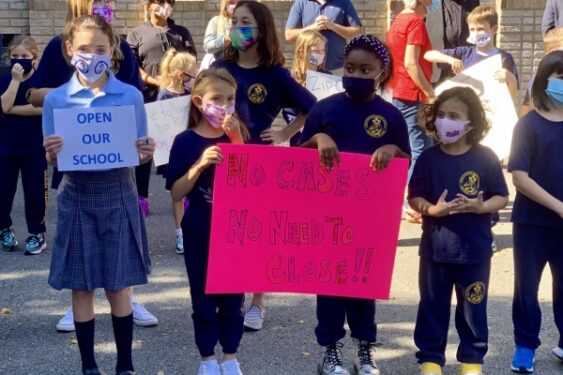 Good Shepherd Catholic Academy Principal John O’Brien said he was upset by Gov. Cuomo’s decision, considering the fact that the academy was doing so well since reopening on Sept. 9.

“We had everything in place. The faculty, staff, and students have been doing such a great job of adjusting to the new routine, and we haven’t had one incident of any of our children or staff members being sick, thank God,” O’Brien said, noting that the academy reopened under a hybrid learning model. “So, the news that we had to close was certainly disappointing and devastating to myself, our staff, and all of our families.”

By noon that same day, Good Shepherd parents and students came together in the schoolyard with handmade signs poised in the air and with their voices ready to be heard. Parent David Evans, who organized the parent-led protest, mentioned how each school has a state-required health and safety plan already in place.

“Our plan is working — we’re not against lockdowns,” he said. “Our plan has lockdowns in place, and we would be at peace if the lockdown was [in effect] because we had an issue here. We currently don’t, so we hope that we can reopen soon.”

Once confirmation came that the academy would be temporarily closed, Katie Biscione — who has four children enrolled in Good Shepherd — said the after school pick-up on Oct. 5 was difficult.

“My son came out of school crying when he heard the news, and my daughter was home yesterday [because it] was her day to learn remotely at home. She was sobbing into the palms of her hands,” Biscione said. “I said, ‘This time, we’re not doing this without a fight’ because there’s really no reason for the shutdown. If there were cases, if there was concern, then we would all be genuinely concerned. But, right now, we all feel safe. So it was very difficult, explaining that to them.”

Michelle Lambrakis, who is a newly enrolled parent at St. Mark’s Catholic Academy in Sheepshead Bay, came to the protest in support of all schools. She decided to take her children out of the New York City public school system six weeks ago, so that they “could have a full education.”

“ZIP codes are made for mail. They’re not made for distinguishing who should be in school and who should not be in school,” Lambrakis said during the rally. “It’s an emotional trainwreck … and it needs to end.”

Click here to read the statement from the Diocese of Brooklyn 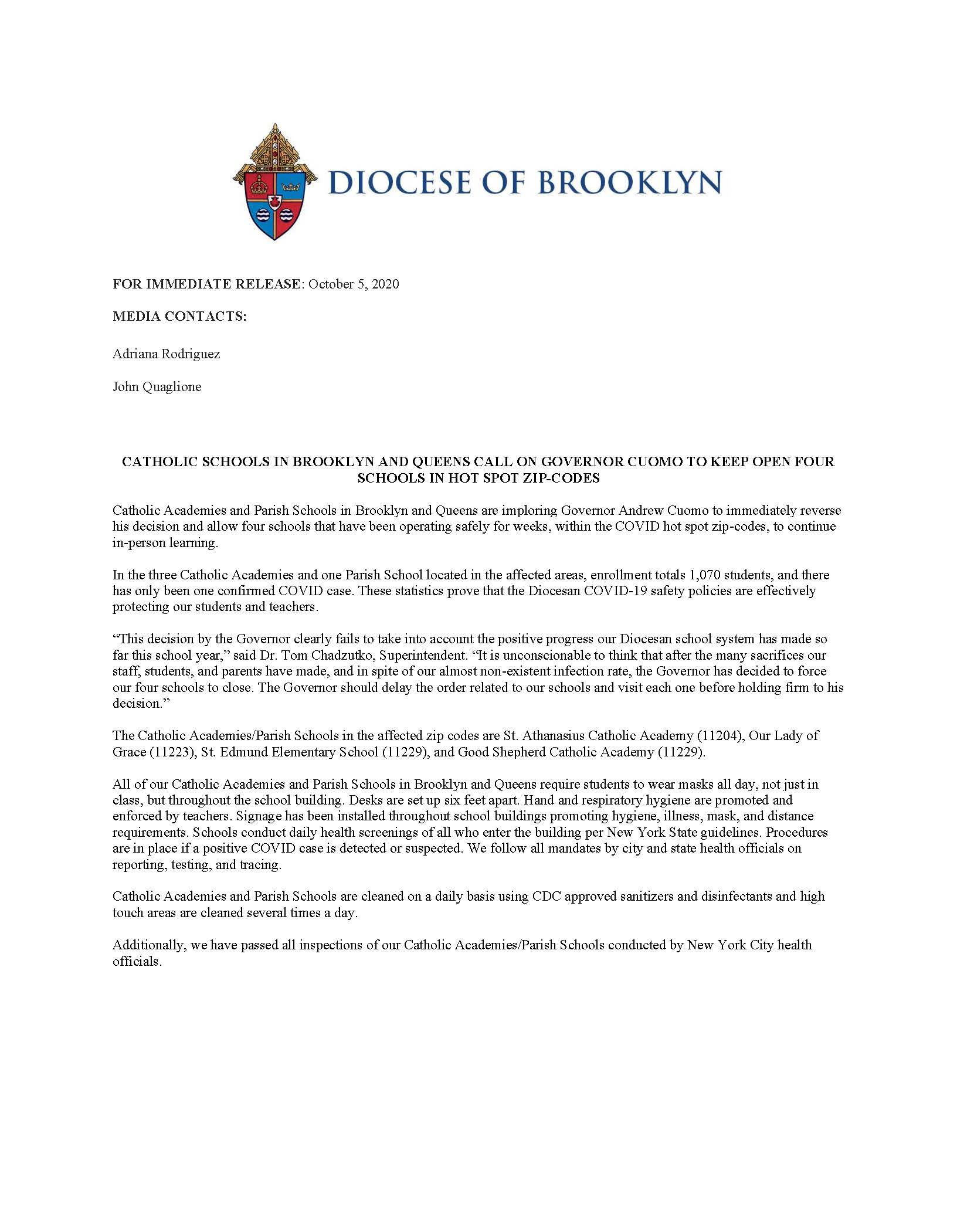 The Diocese Takes a Stand

Joan McMaster, associate superintendent for Principal and Teacher Personnel in the Diocese of Brooklyn, also attended the protest.

She emphasized that the safety and health measures being taken by parish schools and Catholic academies across the Diocese are
working. In the four Catholic schools that had to temporarily close, due to being within the hot spots, only one positive case had been confirmed since school reopened on Sept. 9.

“We would like to continue to keep our schools open, and that is why we are requesting the governor to look at individual school data,” McMaster said.

Superintendent of Schools in the Diocese of Brooklyn Dr. Thomas Chadzutko, who did not attend the protest, did speak with The Tablet and Currents News hours before it took place. He said the governor’s announcement to close Catholic schools came without justified reasoning.

“There’s been no information given to us as to what we’ve done wrong,” Chadzutko said. “We had inspections last Friday in all these schools, they came in, and they looked. In some places, they just gave us materials and said everything was fine. So, why are we being now asked to close? … we did comply.”

Chadzutko also noted the immediate turnaround to remote learning worked due to the principals’ and teachers’ preparation
and leadership. “We just really have a long battle in front of us to make sure that we reopen in a timely fashion, not wait days to get a response,” he said.

Hours after the protest on Oct. 6, Gov. Cuomo announced further restrictions to attack COVID clusters and keep infections
from spreading in those hot spot areas. Three color-coded zones were established — red, orange, and yellow — and will be identified by positive case numbers, not ZIP codes. Public and private schools in the red and orange zones will be temporarily closed. Public and private schools in the yellow zone stay open and will be subject to mandatory weekly testing. The Department of Health will set a percentage rate on Oct. 9.