Firefighters from Ladder 131, Engine 279 marked the 15th anniversary of the Sept. 11 attacks with moments of silence and a memorial Mass inside their Red Hook firehouse.

The Lorraine St. fire station was among the first to respond to the World Trade Center following the 2001 attacks, and five men from the company made the ultimate sacrifice. 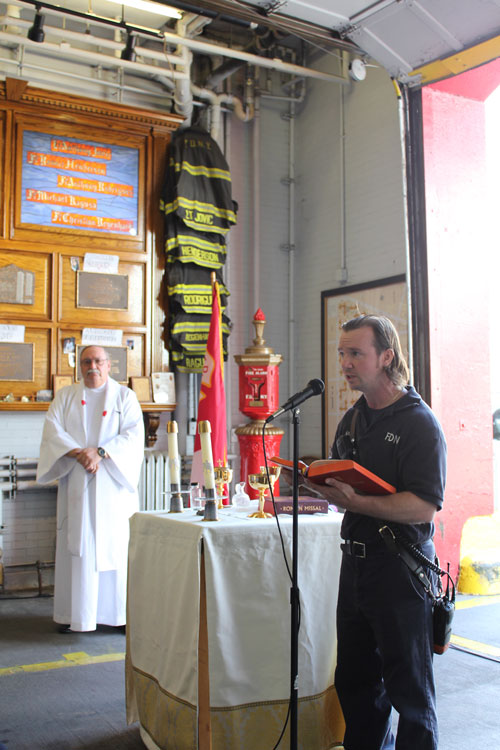 Highlighting the Year of Mercy in his homily, Msgr. Delendick spoke about Sept. 11 as a “celebration of God’s mercy,” a day when God called His sons and daughters by name and carried each of them home.

Prayers were offered for all of the victims, especially the 343 firefighters who gave their lives that day, and the 127 firefighters whose deaths in the ensuing years have been connected to the dust and rubble.

Families and friends of the fallen crowded into the firehouse, standing shoulder to shoulder with the uniformed men who serve there today.

Knows Them by Heart

Though firefighter Peter Santora never served with the fallen from his firehouse, he knows their names and faces by heart; he sees them every time he walks through the door.

“They sacrificed their lives protecting the people of this city so they should never be forgotten,” he said. “We’ve all taken an oath to do this job and to make that same sacrifice if need be.”

Six moments of silence were observed in the firehouse starting at 8:46 a.m., the time when hijackers crashed the first plane into the Trade Center’s North Tower, and ending with a moment of silence at 10:28 a.m. when the North Tower collapsed.

“People are having these memorials and moments of silence in every firehouse in the city today,” said Deputy Chief Kevin Woods of the FDNY’s 11th division.

When he visited the Red Hook firehouse Sunday morning, he asked veteran members to preserve the memories of the fallen, and encouraged younger firefighters to get to know the stories of those who sacrificed their lives.

“We try to keep the legacy of these men alive, and we will continue to do that,” he said. “The members we lost are true heroes.” 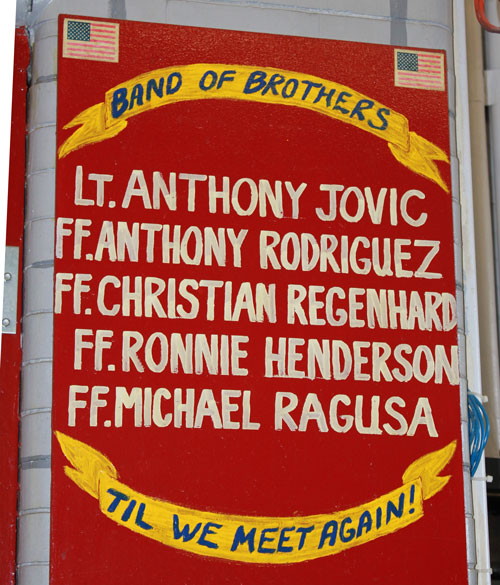 Retired firefighter Harry Gillen of Ladder 131, Engine 279 knew those heroes; he shared coffee and breakfast with them on many mornings. Gillen retired in 1998, but regularly visits his old firehouse to help out and serve as a sounding board for the younger guys.

A parishioner of St. Patrick Church, Bay Ridge, he also handcrafted the station’s stained-glass windows bearing the names and helmets of the five men they lost in the line of duty, along with an FDNY shield and the Twin Towers.

“That day I came here and did whatever I could to help,” he said. “Nobody knew what was happening. You just kept going and doing whatever you could. At night we found out how many people we lost. It was devastating.”

Beneath Gillen’s stained-glass windows, plaques bear the names of the firehouse’s fallen along with their photos and fire jackets.

Brunilda Rodriguez, mother of Firefighter Rodriguez, spent a quiet moment in front of her son’s plaque when she arrived for the memorial service. She’s attended the Mass for the last 14 years, she says, because “this is the last place he was.” 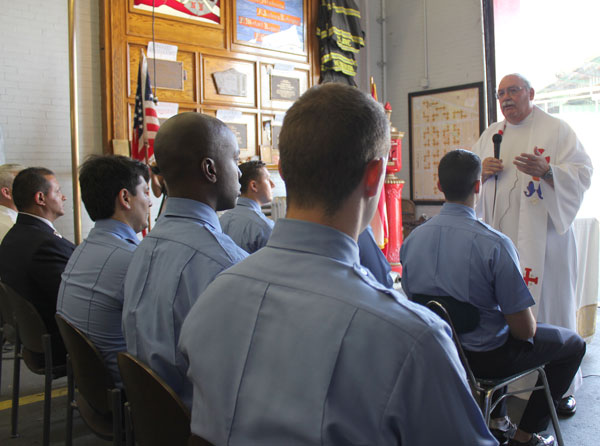 That morning, her son had just gone off-shift and was in his car, ready to go home to his wife, who was days away from giving birth to the couple’s fifth child.

But when the call came in, he made the choice to respond.

“He was born to give,” his mother said. “He’s up in heaven now and we’ve been blessed with his children. We just look at him in their faces.”

Retired firefighter Keith Kaiser from Ladder 131, Engine 279 will never forget the faces of Rodriguez and the other men with whom he rode into Lower Manhattan that day.

“The big anniversaries are really hard,” he said. “9-11 is the one day of the year you want everyone to remember, and everyone here spends the other 364 days trying to forget.”