When members of the New York City Police Department processed down the aisle of SS. Simon and Jude Church in Gravesend, they were accompanied by Owen Sprague, 5, who kept up with his baton.

He joined them for the bow in front of the altar of God and then took his place by his father, retired Detective Danny Sprague.

As he has for the past three years, Det. Sprague played the bagpipes at a Mass of thanksgiving honoring the NYPD on the feast of St. Michael the Archangel, the patron of police. This year, the celebration was special for a couple of reasons, according to SS. Simon and Jude parishioner Patrick Dellamura, who organized the celebration. It’s the first time that the feast day has fallen on the weekend, which gave more people a chance to attend.

The second reason was because Det. Sprague could introduce his son to the congregation. Owen has Down Syndrome and helped inspire With Arms Wide Open, for which there was a special collection during the Mass.

With Arms Wide Open is an organization that Det. Sprague and Police Officer Merritt Riley started to help cops who have children with special needs.

Det. Sprague spoke about the organization from the lectern at the end of Mass.

It has been in the works for a while from the idea Officer Riley had for theorganization after experiencing firsthand the complexities of caring for a child with special needs. In 2002, he and his wife welcomed into the world twin boys, Aidan and Merritt. Less than a year later, they welcomed their third son, Brendan. Merritt was born with hydrocephalus, which led to cerebral palsy.

Sharing the Love of Family 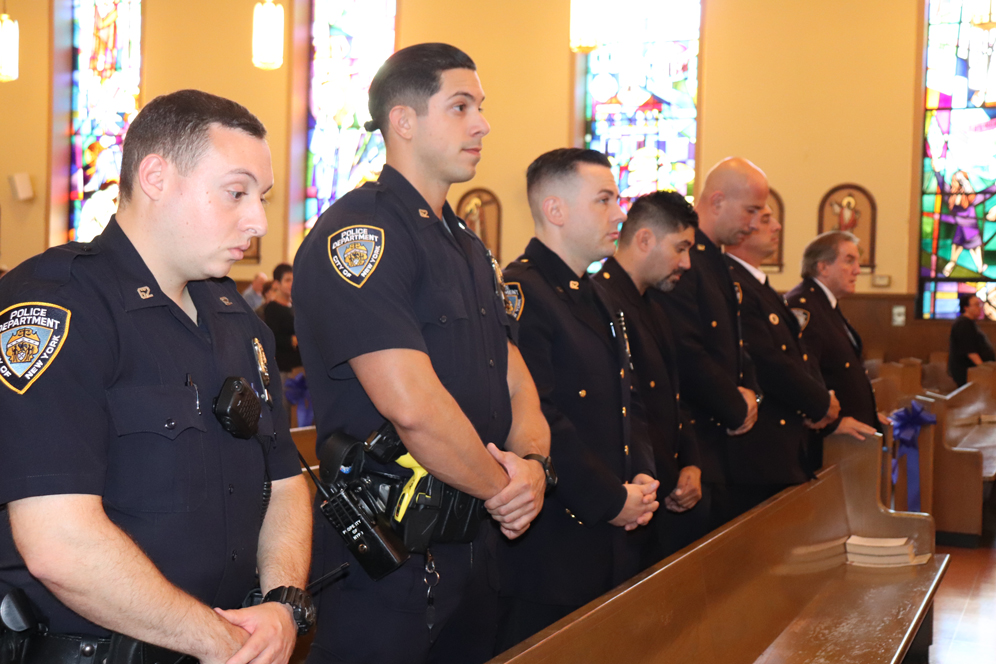 Det. Sprague remembers with fondness visiting the Riley family in those early days. The family would invite officers into their home and share the love of their family with them. Officers Sprague and Riley were good friends, having finished the academy together and serving together in Brownsville at the time. Riley was Sprague’s best man at his wedding.

So it was the most natural thing for Sprague to hold the baby, and then toddler Merritt, in his arms. He loves the kid, and his brothers, too.

But Sprague was single at the time and did not understand the complexities of raising a child, much less one with special needs. Although he knew the basics, Riley did not share many details of what life was like for the family.

Officer Riley shared with his friend that he was thinking of starting an organization to help cops who have children with special needs. He was speaking of helping others, not saying he needed help himself.

Years later, Det. Sprague, now married with three kids and a fourth on the way, gets some challenging news: the 21st chromosome in his unborn son’s genome is all messed up. The diagnosis is Down Syndrome. His wife, Kelly, who worked in the medical field, was distraught. She had seen firsthand how the disease can alter one’s life. However, she had not yet seen much of the latest early intervention methods. It was a tough time for the family.

The turning point for Det. Sprague was when he spoke to Officer Riley’s wife. She told him that no matter what he was going through, there was always someone out there worse off.

And so With Arms Wide Open and baby Owen were born. The philosophy of the organization, Det. Sprague said, was that no one is better off or worse off than anyone else. Everybody just needs to help each other out and it helps when people are gracious enough to accept that help.

Det. Sprague now understands what it’s like to have a family that has the added responsibility of caring for a child with special needs. He understands that insurance companies don’t easily give in and families may never see reimbursements. He knows what it’s like to negotiate with a bureaucracy when every day is crucial for the well-being and development of a child. He also knows that it’s difficult balancing caring for the child with special needs while not foregoing opportunities for the other children in the family.

That is why there is not one-size-fits-all in the organization. If a family needs a special wheelchair to go hiking or to the beach to gaze at some of the beauty of the world between hospital visits, With Arms Wide Open helps to make that happen, whether or not an insurance company deems it necessary. The organization also counsels families to not wait on red-tape and insurance to start therapies and interventions. Support, resources, connections and funds back up that advice.

But it’s often hard to get officers to accept that support, Det. Sprague said.

Sharing vulnerabilities, especially on the homefront, does not come easily to police officers, said Msgr. Robert Romano, NYPD deputy chief chaplain and pastor of Our Lady of Guadalupe, Dyker Heights. He said he has come across many situations when officers have to deal with difficult home situations. It’s hard for them to drop their cop personas and be vulnerable. That began to change after Sept. 11, 2001, he said. Now the public and officers themselves are more attune to the fact that cops are people too.

With Arms Wide Open is far from a place for self-pity. It’s an organization of cops, after all. They help each other out, just like on the job. They call each other to check in, give advice and make sure to respect each child as a beautiful gift from God. That’s what Det. Sprague’s appeal came down to at the end of the Mass at SS. Simon and Jude.

“When you find yourself staring because they may be a little different, because of a disability,” he said, “stop staring. Engage, don’t be shy, say hello.”

There may be a reason that person caught your eye, it may be God trying to offer you something. A simple act of kindness can help a child who is having a melt-down and a little compliment can make a connection that transcends words. It’s important to not ignore children, Det. Sprague said, and not to talk about them as if they were not there.

A sense of community and kindness can mean the world to anyone, especially when they feel overwhelmed.

Father John Maduri, administrator of SS. Simon and Jude, wants to make sure that the officers and their families know the community has their back. In addition to praying with them, honoring them and supporting them, Father Maduri said he was thankful to be able to share the Eucharist with them. There is no stronger bond than God.

During his homily, Msgr. David Cassato, also an NYPD chaplain, thanked the many members of the police force and their supporters in attendance. He entrusted them all to God and to the protection of St. Michael the Archangel.

Det. Sprague said he never quite understood God as well as he has since Owen entered his life. When he first received the diagnosis, his parents urged him to go to a healing Mass – not to change who Owen would be, but to help him be as happy and healthy as possible.

“Life is going to deal you stuff, your faith is what is going to get you through,” Det. Sprague said.

Owen changed his family, but not in the way that they expected. Owen helped the family make room for God. They understand now how much they rely on Him. Now everything is planned around the Sunday Sacrifice. Owen’s older siblings are involved too and want to help in any way they can; Owen is often in tow.

“I truly believe he was a gift from God,” Det. Sprague said.