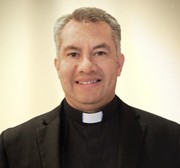 Father Victor Manuel Bolaños, 47, never thought of becoming a priest. Not until World Youth Day, Australia, in 2008 when he felt a vocational call so powerful that he could not resist it.

“I was not young at the time,” he recalled. “I decide to accept the invitation of the Lord and to enter his ways.”

He was 39 and had traveled to Australia with the community of the Neocatechumenal Way in the Diocese of Brooklyn. For Father Bolaños, the Way was a tool of the Church that rescued him from a spiral of selfishness.

Born in Colombia and raised in the Sagrada Familia Church in Quito, Ecuador, Father Bolaños came to Long Island on a work visa. He had been working as an engineer for 15 years and was contracted by a New York company. Here, as a single man with money in a new country, he became “intoxicated with self-improvement.”

“I had a personal coach. I was consumed with trying to achieve. I had girlfriends and things … and this was killing me inside,” he said. “Not only it was it not enough, it was not the answer.”

The answer he was craving was not external, but he did not see it until he began walking with a community at St. Joan of Arc Church, Jackson Heights.

“I began to see the beauty of the church that I didn’t see before,” he said. “At some point in life, I almost left the church. At one point, I was flirting with the non-denominational churches attracted by the preaching, attracted by the emotional aspect … but with this tool of the Church I began to understand, to fall in love with the (Catholic) Church.”

Accepting the Church led him to see his life story with new eyes, and to reconcile with his parents. He started “to recover the dignity that I had lost in my search for happiness, in my selfishness.”

Ten years later, his heart was prepared to listen to the call to the priesthood.

This call has been confirmed in his eight years in the seminary. He graduated from Redemptoris Mater Seminary, Kearny, N.J., and earned a master’s in divinity from the Immaculate Conception Seminary School of Theology at Seton Hall University, South Orange, N.J.

Preparing to be a priest for the Diocese of Brooklyn, Father Bolaños spent two summers at St. Benedict Joseph Labre Church, Richmond Hill. He learned to be a parish priest from Father Philip Pizzo, pastor.

Father Bolaños and another seminarian spent a summer visiting the houses of children who were baptized in the parish but had not come back to remind the parents that there is much more in the church.

In addition to serving the pastoral needs of those who come to the parish where he will serve, Father Bolaños wants to find ways to “search for the other ones… the ones that would not approach the (church) building.”

During his diaconate year at St. Gabriel parish, East Elmhurst, Father Bolaños discovered a God-given desire to prepare homilies and preach to people with charity.

Father Bolaños saw how Father Gioacchino Basile, pastor, and the parish deacon love their people. He also saw the sacraments, like baptisms, as an opportunity for those invited to come back to the church.

“It is a chance to minister to them and to give them the possibility to know that this might be a place in which they might find an answer for their lives,” he said. “To learn that God loves them exactly how they are.”

He added that after knowing themselves to be loved, people can find that the Lord can help them face whatever problem or vice with which they might be struggling.

Some priestly examples of his include Pope St. John Paul II, for his love for the youth and emphasis in Christian anthropology, and Pope Emeritus Benedict XVI, for the way he articulates the faith and for his humility.

As a priest, he looks forward to exercising the sacraments, especially the sacrament of reconciliation and most of all, to celebrate Mass.

Father Bolaños hopes to be a humble priest who is willing to serve.

“I want to be a priest who knows that he is always a priest,” he said.

His parents, Luis Bolaños and Victoria Duran, will be coming to his ordination along with his three siblings, nephews and nieces. Msgr. Renato Graselli, rector of Redemptoris Mater in Kearny, will vest him.

Father Bolaños will offer his First Mass of thanksgiving at St. Gabriel Church in East Elmhurst on Sunday, June 5 at 10 a.m.

One thought on “Father Victor Bolaños”