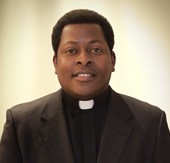 Father Yvon Hector Aurelien felt called to be a priest since he was 14 years old. Now, after a long path in the seminary, he can become what God intended: a priest who is there for His people.

“I love the words in John 15, ‘I have chosen you.’ I love that God is telling us He is the One who choses,” he said. “My vocation is about (God’s will). It’s not only me. It depends on God’s calling and then you need to want that, and then the Church has to confirm it.”

Born in Haiti in 1976, Father Aurelien was one of four children born to Joseph Gratia and Marie Claude Orelien. Growing up, he was very involved in his parish the Cathedral of the Immaculate Conception in the Port-de-Paix Diocese.

He later became the head of his diocese’s youth group, which gave him the opportunity to meet many priests and the bishop.

He went to World Youth Day in Toronto, Canada, in 2002 as the diocesan assistant vocation director. Not yet a priest, the diocese hoped that his desire to become a priest would inspire other young people.

“My vocation was clear at that time,” he said.

However, the Port-de-Paix Diocese decided that it could not confirm his vocation, he said. Still searching for a way to fulfill what he believed was God’s will, he applied to come to the Diocese of Brooklyn.

Coming to New York five years ago, he found a home at St. Jerome parish in East Flatbush. He spent months at the Pope St. John Paul II Discernment House, Cypress Hills. Afterward, he studied for three years at St. Joseph Seminary in Yonkers. Then God said “not yet” again.

“I was expected to be ordained last year, but I know God has His plan,” he said. “Especially because Bishop DiMarzio picked the right place where I should go.”

He spent a pastoral year at Immaculate Conception parish in Astoria, where Msgr. Fernando Ferrarese took him under his wing.

This helped Father Aurelien to get more comfortable preaching and connecting with the people at the parish. He gradually discovered that preaching was, in fact, something that he could do well.

“The previous year, I was so nervous, I could have paid somebody to preach for me,” he said.

Now, he is able to connect what is happening in society with the Scripture during his preaching – something he calls “a blessing.” His knowledge of Creole, French, English and a little bit of Spanish will help him to teach God’s message.

In addition to Msgr. Ferrarese, another priestly model of Father Aurelien’s is Bishop Emeritus Frantz Colimon, S.M.M., who was a teacher at his seminary in Haiti.

“He is a holy guy. He would always take the bus” and avoid costly trips, Father Aurelien said. “He is a very good example. He carries a life of poverty.”

Father Aurelien looks forward to living a life of holiness and to being close to God’s people.

“Being a priest means being available for them,” he said.

He hopes that the Blessed Mother, for whom he has a deep devotion, continues to accompany him. He also wants to be a good example to all the faithful.

“We are the mediation of the faith of the people,” he said.

Now that his 12-year path to the priesthood has ended, his family back in Haiti and in Canada is very happy. His relatives are looking forward to seeing him begin his priestly ministry. As he becomes a priest on June 4, Father Jean-Miguel Auguste, pastor of St. Pius X Church in Rosedale, will vest him.

Father Aurelien will offer his First Mass of thanksgiving at Immaculate Conception Church, Astoria, on Saturday, June 4, at 5 p.m. He will celebrate a second Mass at St. Jerome’s Church on Sunday, June 5 at 1 p.m.