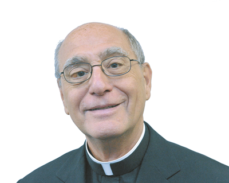 Father Michael A. Carrano, pastor of Our Lady of Hope, Middle Village, died on June 7 at the Immaculate Conception Center, Douglaston, after a battle of cancer. He was 74.

Father Carrano, who was pastor of Our of Lady of Hope since 2009, had previously served as a pastor of Assumption of the Blessed Virgin Mary, Brooklyn Heights, and was a parochial vicar at Our Lady of Guadalupe, Dyker Heights, and Sacred Heart of Jesus and Mary – St. Stephen, Carroll Gardens.

He was also principal of Our Lady of Mount Carmel School, Williamsburg, and director of the diocesan Youth Ministry Program of the Catholic Education Office, as well as dean of the Queens 6 deanery.

After the terrorist attacks in New York on Sept. 11, 2001, Father Carrano served as a spiritual advisor for FDNY Engine 205/Ladder 118, which lost eight firefighters who were fighting the fire at the World Trade Center.

A native of Brooklyn, Father Carrano graduated from St. Francis College, Brooklyn Heights, in 1966, and was ordained a priest in 1970 by Bishop Francis Mugavero.