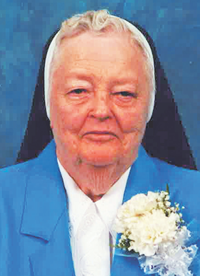 Sister Mary Donald Kelly, R.S.M., a member of the Sisters of Mercy of the Americas Mid-Atlantic Community for 72 years, died on April 5 at Maria Regina Residence, Brentwood. She was 90.

Born in Brooklyn, Sister Mary Donald was orphaned at an early age and was raised by her aunt and uncle. She attended St. Jerome School, East Flatbush, and Mercy Juniorate H.S., Fort Greene.

She entered the Sisters of Mercy Novitiate in Syosset in September 1946 and professed her final vows in March 1952.

A Mass of Christian burial was celebrated in Sisters of Mercy Convent, Whitestone.  Burial was in St. Charles Cemetery, Farmingdale.