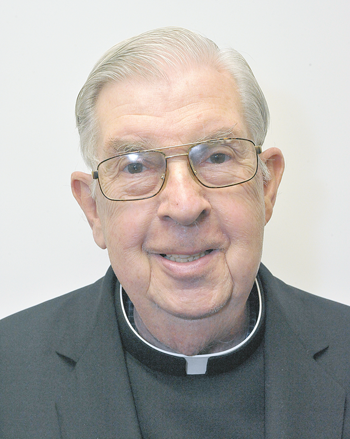 Father Robert A Blauvelt, a former pastor of St. Stanislaus Kostka, Maspeth, who served in many parishes in the Diocese of Brooklyn, died on June 19. He was 89.

In his homily at the funeral Mass, Bishop Chappetto said Father Blauvelt was “a man who loved Jesus very much and wanted everyone to have a relationship with Jesus.”

“He was a real evangelizer,” Bishop Chappetto added. “In homilies, writings, books, he believed in the centrality of the Eucharist in our lives.”

Bishop Chappetto also recalled the “wonderful team ministry” that Father Blauvelt was a part of at St. Mary Mother of Jesus parish in Bensonhurst.

“He made a lot of friends there and he kept those friendships for many years,” Bishop Chappetto said.

In 2007, he retired and moved to Bishop Mugavero Residence, Douglaston.

Father Blauvelt is survived by his brother, Douglas of Prairie Village, Kan.

Sister Margaret Van Rossem, S.S.N.D., a native of Jamaica, Queens, died on June 4, at Lourdes Health Care Center in Wilton, Conn. She was 86.

After pronouncing her vows as a School Sister of Notre Dame in 1952, Sister Margaret embarked on a career in teaching, which included a stint at St. Anthony’s School, Ozone Park. She also taught at Catholic schools in Maryland.

A Mass of Christian Burial was celebrated on June 8 in the chapel at Villa Notre Dame in Wilton. Burial was at St. Mary’s Cemetery in Bethel, Conn.